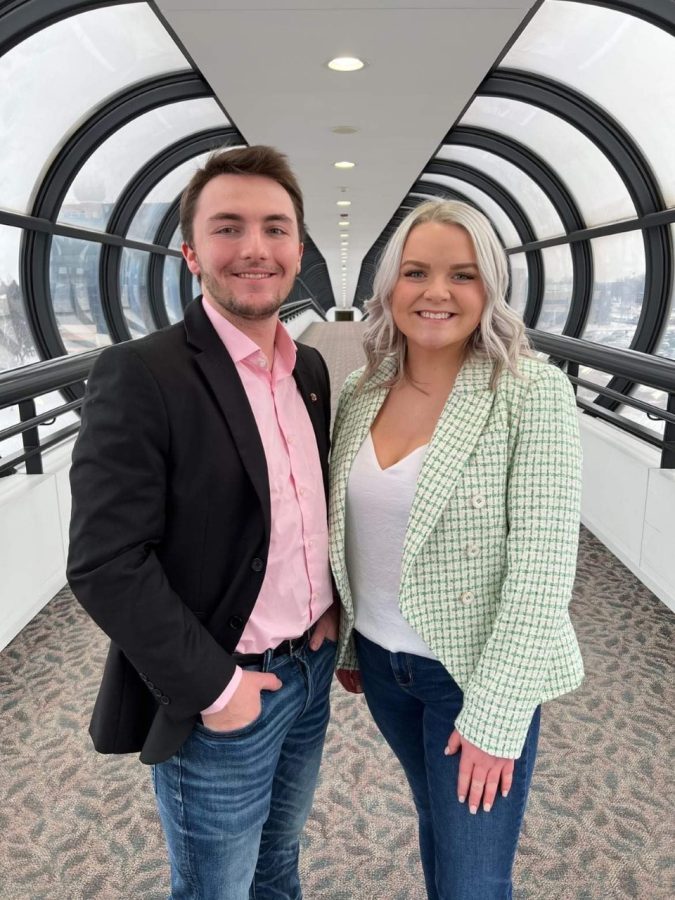 The race for Student Body President and Vice President has begun with the recent announcement of Sadie Hanson and Skyler Strand for the respective roles. They announced their bid for the roles on February 16th, 2022. The upcoming elections for Student Government are on April 13th, 2022.

Who are Sadie & Strand?

Sadie is currently a Junior who studies marketing and public affairs at Nistler College of Business. She is also within a “4+1” program to obtain her master’s in business administration. Sadie was born and raised within Grand Forks and has always had a love for the University of North Dakota. Since being a student on campus, Sadie has been involved in many different organizations. This includes sorority Gamma Phi Beta, Student Ambassadors, Women in Business, and Student Government. Within Student Government, she has held roles including Senator of the Nistler College of Business and Public Administration and the Governmental Affairs Commissioner for the Executive team. In Sadie’s free time, she enjoys being at her lake cabin, traveling, spending time with her family and friends, going to UND athletic events, and is a self-proclaimed “shopaholic.”

Strand is currently a sophomore pursuing a degree in finance and a minor in economics. He has spent most of his life living in Bismarck, ND, however, spent several years living in Grand Forks while a parent was pursuing a degree at the University. One of his first core memories on UND’s campus was having lunch when he was younger in the Old Memorial Union. Since being a student on campus, he has been involved in his fraternity, Lambda Chi Alpha, as well as student government. Within his fraternity, he has taken on the role as Vice President; within student government, Strand has been a SOFA Liaison (2020-2021), Off-Campus Senator (2021-2022), and the chair of the Appropriations Committee (which deals with budgeting, finances, etc.). In his free time, Strand enjoys spending time outdoors on the river, roller blading around campus, coaching hockey, and baseball in town, traveling, and watching sports.

What is their campaign?

Sadie and Strand have created three main themes to represent their campaign. Each theme has three sub-points that further emphasis the steps that behind each of these themes. The themes and subpoints are as follows:

Both Sadie and Strand stated that this is what makes up student life on UND’s campus. They want to increase the number of organizations as well as the funding that these organizations receive.

Nearly 10% of students on UND’s campus are members of the Greek Life community, including both Sadie and Strand. “It’s important for students within the Greek community to have good relationship with student government and administration to ensure their needs are met” Strand noted, and this team hopes to provide it to those students.

“Student athletes deserve to be supported and appreciated” Sadie stated. This candidacy team emphasizes wanting to enhance the experiences for both the fans and athletes, no matter the level of competition. This means celebrating old traditions and creating new ones to unite students to a common interest of the school: sports.

“We [Student Government] are a representation and support for all students, and everyone deserve to be heard” Sadie emphasized. This ticket states that they will listen and support students from all backgrounds and be the liaison to the administration on students’ needs, funding sources, etc. Overall, Sadie and Strand want UND’s campus to feel safe, welcoming, and inclusive to everyone now and into the future.

Sadie and Strand want to provide more opportunities within the Grand Forks community for students to be involved. The team specifically want to provide more access to internships and volunteering opportunities to prepare individuals for their career paths. “Making connections, building experiences, and adding to one’s resume is so important, we are here [UND] to get degrees and therefore jobs after all” Sadie explained.

Most people on UND’s campus have run into issues with parking services in the past, and Sadie and Strand hope to address some of these concerns. This team wants to be strong advocates to voice students wants and needs. They stated that they want to “bridge the gap between the needs of the student body and the operations of parking services.”

Openly talking about mental illness is one of the first steps in eliminating the stigma that surrounds it. Sadie and Strand hope to be advocates for mental health awareness and resources for students. If elected, they hope to be “strong leaders who stand for you [students].” Both Sadie and Strand have been advocates on previous mental health causes within Student Government, and they plan to continue these strides if elected.

It was estimated that there are forty-seven consecutive days within the fall semester that there is no break for students. Sadie and Strand hope to potentially provide this additional time off to support and prioritize the mental health of UND’s students.

Overall, Sadie and Strand want to make sure the needs of all students are met. “We pay a lot of money every year; we deserve good opportunities for both academics and social experiences” Sadie stated. As we transition out of the pandemic, Strand explained how he wants to provide more “enjoyable” opportunities on campus for students. After all, college is only four years, and it is “important to enjoy the time we have here” Strand emphasized.

What made them want these roles and how are they prepared?

Both Sadie and Strand decided to run for these roles as they saw an opportunity within student government to better the University. Sadie stated that she has always enjoyed being able to serve the students. She enjoys getting out in the community and hearing the concerns of students across campus. Through these experiences, Sadie has gotten to see the true impact that Student Government can have on different students across campus; thus, continuing to make a difference for students is Sadie’s goal.

Strand’s desire for this role has been influenced by the COVID-19 pandemic. With his high school graduation being in 2020 at the beginning of the pandemic, Strand had to finish his Senior year of high school and the majority of his first year at UND online. Because of this, he was unable to feel as involved on campus as he would like. The pandemic gave Strand perspective; as someone running for a leadership position within student government, he does not want anyone on UND’s campus to feel isolated from others or organizations like he felt during his freshman year. Through different leadership positions in high school, to leadership roles in UND’s campus, Strand believes that he is prepared for this opportunity. He highlighted his time as Vice President of his fraternity and chairing the appropriations committee of Student Government as his roles on UND’s campus for learning leadership skills. Learning the “ins and outs” of Student Government’s budget, how to manage a team, and how to lead others are what Strand states will benefit him most in his run for Vice President of the Student Body.

Sadie and Strand stated, “if you want to see change on campus, more accessibility to student government, and strong advocates for students, vote for Sadie and Strand on April 13th”. This candidate ticket urges students to reach out to them on their Instagram and Facebook @SadieandStrand with questions regarding their platform, voting information, and any other election information.