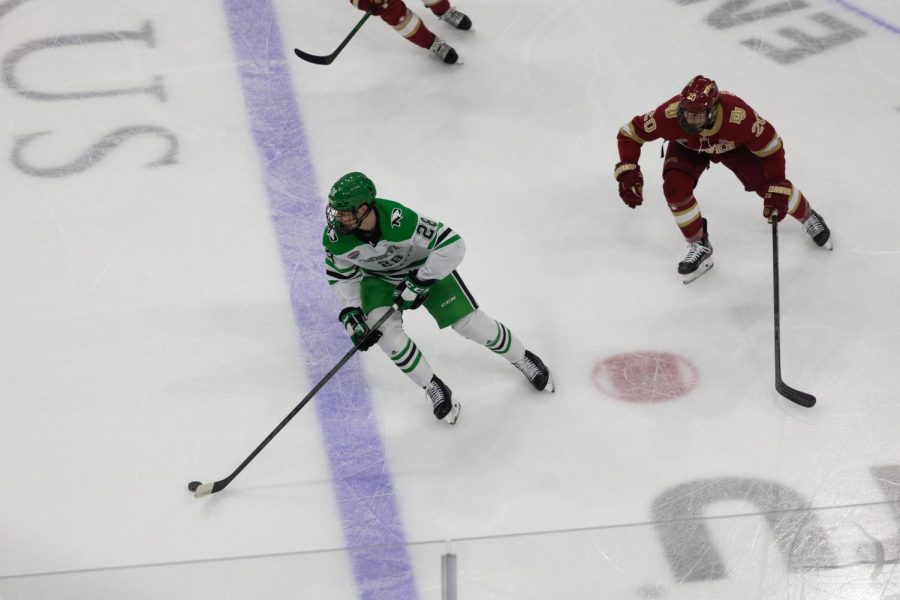 Every second, every shift, and every bounce of the puck counts. If you were ever skeptical about that, Thursday’s hockey game against the Fighting Irish eliminated that skepticism. There are moments in sports that will live in memory for a long time, good and bad. Thursday night was one of those bad memories that will be hard to forget. Whether it be having two power play opportunities and not being able to score, an interference penalty 14 seconds into overtime to wipe out what was left of a man advantage, or a 12-minute review at the end of regulation that would determine if the season went on for another period or if it was over in the blink of an eye.

It all resulted in Notre Dame advancing to the regional final against Minnesota State and North Dakota starting their offseason earlier than initially planned. Brent Johnson had UND’s only goal with less than two minutes in the first period, giving his team a one goal lead at the first intermission. It did not take long for Notre Dame to respond as Landon Slaggert tied the game 1:03 into the second period. The game went without a goal for the rest of regulation, which is when things got complicated.

With North Dakota on the man advantage to close out regulation, there was a reasonable assumption that the worst-case scenario would be that North Dakota is unable to break through Notre Dame’s third ranked penalty kill and the game would take an OT period to be decided. That was not the case as Adam Karashik buried the puck in the net off a rebound as time expired to potentially give Notre Dame the shorthanded, game-winning goal. After a review that took nearly the length of a standard intermission, it was determined that time had expired and the goal was no good. 12 minutes of North Dakota fans being put in a time machine back to the 2014 national semifinals resulted in a second chance.

There was still 28 seconds left for UND to attack on the man advantage at the start of overtime. 14 seconds into the period, however, a critical interference penalty on Chris Jandric was called. The teams played a quick session of four-on-four hockey, and Notre Dame went to the power play where they had been unsuccessful on their previous two tries. Graham Slaggert then put a masterful shot from the circle past Zach Driscoll into the top corner of the net, giving Notre Dame the win one minute and 12 seconds into the power play, ending the UND hockey season.

Both goalies had 23 saves in what was an impressive performance by both Zach Driscoll and Matthew Galajda from Notre Dame. North Dakota won the faceoff battle 29-17 and had 24 shots on goal. Despite this, Notre Dame’s 25th shot on goal was what decided the game. Having the game end the way it did was unfortunate, but someone was going to lose that game. Despite what happened, Thursday’s game was good hockey played by two schools with a successful history in the sport.

As tough of a loss as it is, we can still appreciate those who work day-in and day-out to master something they have been practicing at for years. This is a team who was playing some of their best hockey as the season was winding down, a team that grew as the season went on, through difficulties, injury, and a multi-week world competition overseas known to most as the Olympics. This may be too narrow of a view, but watching this team overcome challenges and grow together was a privilege. Even though it ended in heartbreak, there is still value to what these men accomplished this season as players and teammates.