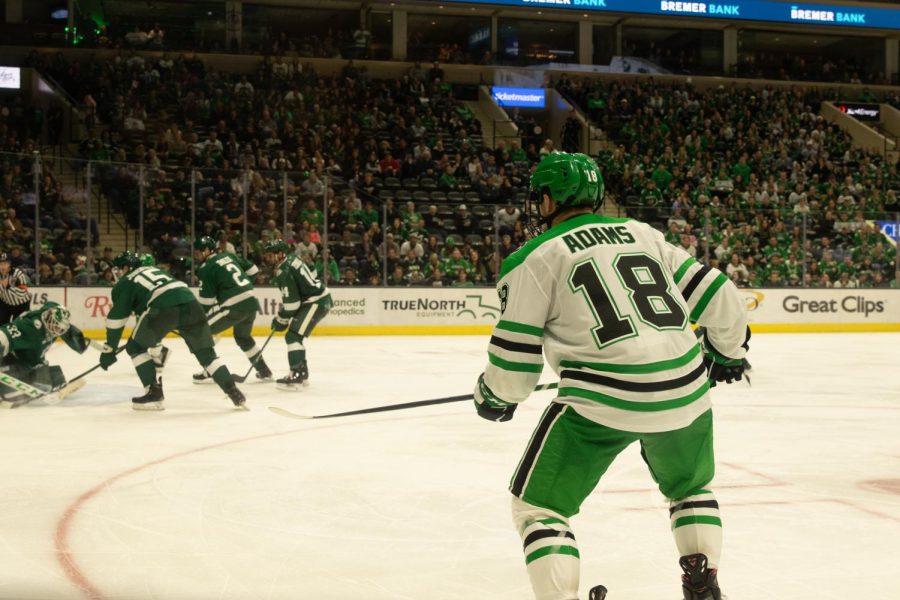 GRAND FORKS, N.D. — Went home for break? Didn’t have time to check Twitter for score updates? Don’t worry, Dakota Student Sports Editor Claire Weltz has you covered. Here’s what you missed while away:

UND started the new year at the Ralph Engelstad Area with a 0-2 loss to the U.S. National Under-18 Team. This is the first time UND has lost to the U.S. U18s, but there’s no need for fans of the Green and White to worry. The match was an exhibition, so the loss will not impact NCHC points. In general, exhibition matches are an opportunity to give developing players time on the ice, and this was the case for goalkeeper Jakob Hellsten. (More to come on Hellsten.)

A week after the U.S. U18s, the Fighting Hawks hosted then No. 14 ranked Cornell. The Friday night matchup resulted in a 3-4 loss for UND despite holding a two-goal lead early in the third period. Mark Senden, Ashton Calder, and Jake Schmaltz each scored for UND, but the Big Red responded with three goals of their own in the third period to win.

Coach Brad Berry wanted his team to respond to the adversity with a “pushback,” and Riese Gaber got the message. Gaber scored his ninth goal of the season to give UND a 1-0 lead in the first period. After that, it was downhill. Cornell scored three unanswered goals for a final score of 1-3. It’s the first time Nodak has been swept in a home series since 2018.

The NHL announced in late December that it will not allow its players to participate in the 2022 Winter Olympics held in Beijing. This creates an opportunity for several collegiate stars to represent the Red, White, and Blue on the world stage, including UND standout Jake Sanderson. Sanderson is expected to play the remaining January games for UND but will be unavailable for at least the beginning of February. His timeline to return to North Dakota and NCAA play depends on how Team USA performs at the Olympics.

With Zach Driscoll graduating this year, Coach Brad has had to consider the younger players that may replace the current senior starter – introducing Jakob Hellsten to the lineup in various contests. Hellsten is a freshman from Sweden and is the first Swedish-born player to suit up for UND. Jakob Hellsten has seen minutes away versus St. Cloud State and Colorado College as well as at home against the USA U18s (exhibition) and Cornell. Hellsten has let in a total of 9 goals during regular-season play.

Despite the 1-3 loss to Cornell, Coach Berry was pleased with Hellsten’s performance. “The ones that he gave up tonight, those were tap-in goals that we have to have better coverage in front of on, but when he handled the puck, he was sharp. When he handled it, he snapped it up the ice, and we went the other way and played in their end of the rink.” He went on to add “It’s good when you have a couple of guys that can play that position and play it well. It creates a little competition.” As the season progresses, it remains to be seen who will get the nod to start in goal.

Senior Gavin Hain was injured in the January 7 Friday night loss to Cornell. Hain went down behind the net on UND’s attacking third, and Cornell skated down the ice to score. (Literally adding insult to injury.) The injury appears to be lower body, and Coach Brad Berry said that Hain is a “week-to-week” decision. Berry praised the team’s medical staff, and for better or worse, Hain gets a week of recovery because….

Two days before UND’s first NCHC matchup of 2022, the contest was canceled due to a COVID-19 outbreak within the UND team. Head Coach Brad Berry met with the media in a press conference that afternoon, although he did not give specifics about which players had tested positive. The NCHC is rescheduling Omaha to play at the REA February 4-5, and Colorado College (scheduled for February 4-5 originally) will move to February 11-12.

Claire Weltz is a Dakota Student Editor. She can be reached at [email protected]