UND Battles NDSU at the Alerus for a 10-16 Loss 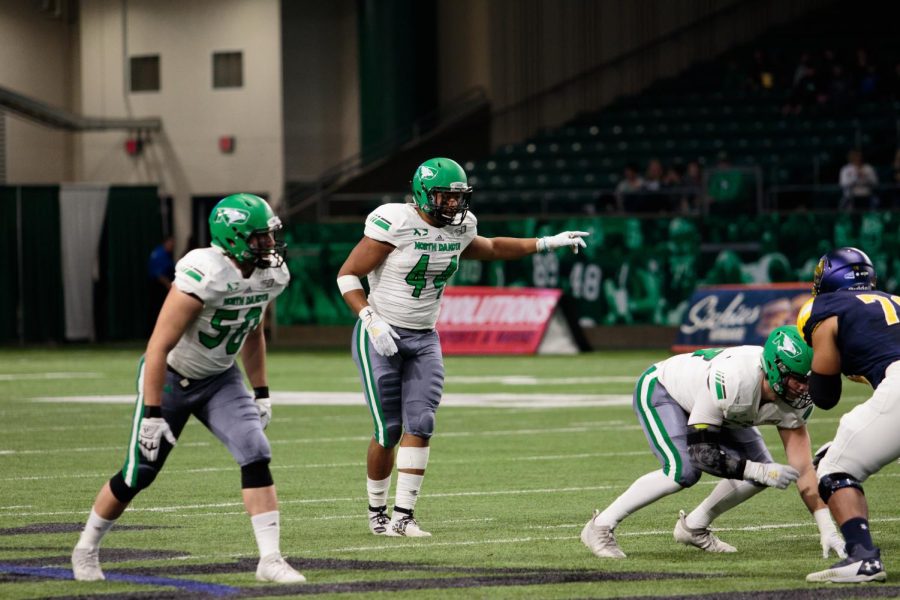 On Saturday, October 2, 2021, UND faced off against NDSU at the Alerus Center, playing the Bison for the first time at home since 2003. Weeks prior, the Alerus Center hosted 22,000 fans for a Luke Combs concert, but the atmosphere for the football game rocked the house. Louder than loud, both sides had false starts in the first quarter, making it hard to establish a rhythm for a sustained drive.

NDSU opened up the scoring with a field goal on their second drive of the first quarter, but UND answered with a scoring drive of their own. Sophomore quarterback Tommy Schuster found Bo Belquist for 30 yards in the endzone to take the lead 7-3.

Otis Weah broke 1000 career rushing yards in the third quarter and put up 85 yards in the game total. A spark in UND’s explosive offense, it was exciting to watch Weah square off against NDSU’s strong defense.

Neither team had an established rhythm for the majority of the game, but the UND offense dug deep towards the end of the third quarter. Having marched down the field and into NDSU territory, UND lost major momentum when QB Schuster threw an interception to give the ball back to NDSU with only 4:26 left in the quarter. NDSU didn’t capitalize on the turnover, but the tide had shifted in favor of the Bison.

UND almost made their own magic when senior punter Cade Peterson pinned the Bison on their 1 yard line. The ball was punted out of bounds, and in real time, many fans couldn’t tell which side of the pylon the ball landed on. When the Bison started at the 1 yard line, the fans got loud to help UND keep the Bison at bay and get the ball back with good field position.

NDSU punted, and UND took over at midfield. With 5:53  left in the game, it was do or die. Skokna and Weah ran for minimal yardage, and UND found themselves with 4th & 2. Coach Bubba Schweigert took a timeout to make the best play call, but Bo Belquist came up a yard shy on a slow developing play, turning the ball back over to the Bison on downs.

Taking advantage of the field position and assisted by a 21 yard run by Hunter Luepke, NDSU marched down the field. Bison QB Quincy Patterson II ran the ball in from the 3 yardline to make it 7-16.

UND tried to comeback and kicked a field goal for 10-16, but with 16 seconds remaining, the game was over. 12, 846 attended the game for a sold-out matchup.

Claire Weltz is a Dakota Student Arts and Community Editor. She can be reached at [email protected]