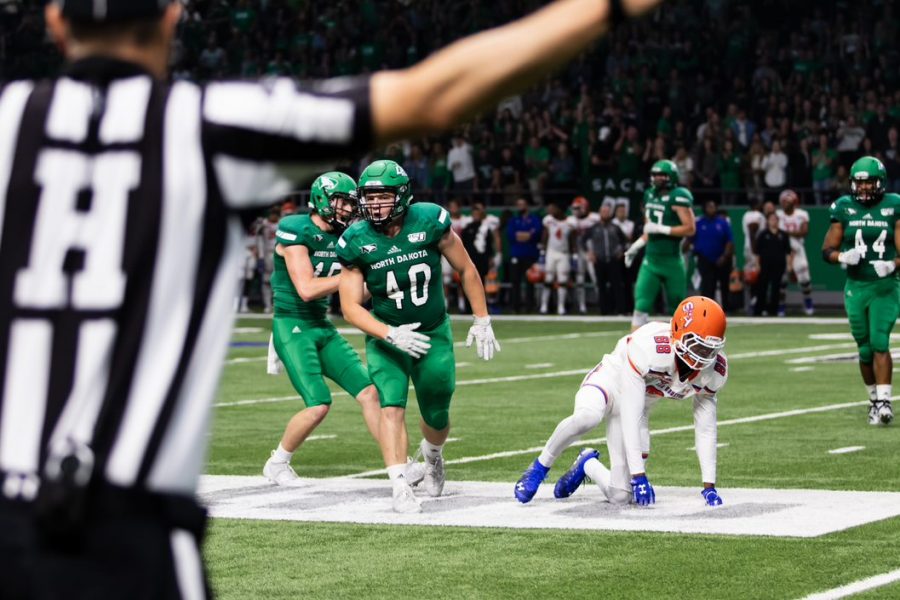 One of the strangest football seasons in the history of the University of North Dakota program came to an end Sunday as the Fighting Hawks fell to number one ranked James Madison 34-21. UND Travelled to Harrisonburg, VA for their first ever appearance in the second round of the FCS playoffs. An unfairly overlooked location in the pantheon of college football, the campus of James Madison deserves its moment in the sun as of the most picturesque settings in the sport.  Coming off their big win against Missouri State hopes were high for the Fighting Hawks but they ran into a well-polished team in the James Madison Dukes.

The game could not have started worse for UND as during the first drive of the game, quarterback Tommy Schuster, was intercepted after only 57 seconds of possession. Schuster would go 16 for 26 on the day with 213 yards and two interceptions. He was kept out of the endzone for the first time in his career. UND was without their team leader in catches as Bo Belquist could not take the field due to injury. This left room for Garett Maag to step in with six catches for 87 yards.

JMU was the first to hit the scoreboard with a field goal early in the first quarter and never looked back, holding the lead the entire game. Though a balanced attack on the day JMU was able to amase 468 yards of offense on the day. The largest total the UND defense has allowed all season.

James Madison set the tone for the rest of the game during their 2nd drive of the game. A 80 yard, 13 play drive with hard, smash mouth football played exactly into the strengths of the JMU squad. 11 of the 13 plays on the drive were rushing plays to a handful of different running backs. Capped off with a three yard rush from Percy Agyei-Obese. Aqyei-Obese was the workhorse of the day rushing for 128 yards and two touchdowns on 27 carries.

UND struggled to establish a consistent attack early on in the contest and by the time they were ready to put up a fight, their fate was nearly sealed. A strong end to the second half of play with a 91 yard touchdown scoring drive set the stage for a big second half, but the offense could not match that of JMU. UND was held scoreless in the third quarter for the first time all season.

Fighting Hawks standout redshirt sophomore, Otis Weah, had another good performance on the ground. Weah rushed 96 yards on 13 carries including a touchdown. The running back from Moorhead, MN has scored in every game he has had a carry-in, extending his streak to 10 games.

Another bright side for the UND team again was the performance of their special teams unit. Forcing yet another turnover on a muffed punt early in the first quarter. The special teams for the Fighting Hawks have been a spark plug and an unlikely source of points for the team in the past few seasons.

In one of, if not the strangest football seasons of all time, UND performed above expectations. The Fighting Hawks first year in the Missouri Valley football conference, arguably the toughest in the entire FCS, and they came away with a share of the conference title. Highlighted by their upset win over number 3 ranked South Dakota State. UND reacted possibly to all the adversity that was thrown at them. From their entire season being postponed and moved to the spring, to having four consecutive games canceled due to COVID-19 complications. The program has taken tremendous strides in the past few seasons and have many excited for what’s to come.