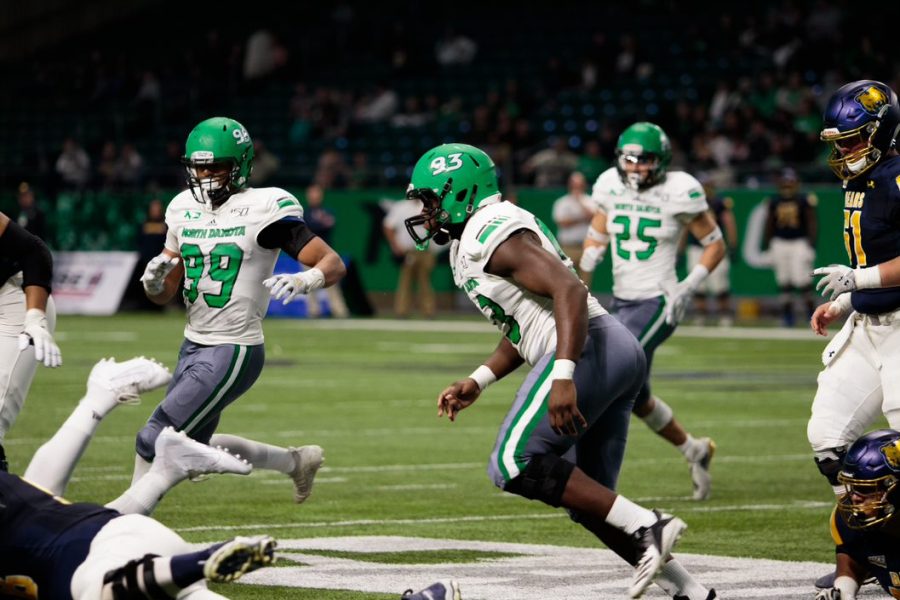 A month off the field seemed to have no effect on the 7th ranked University of North Dakota football team this Saturday as they rolled number 12 Missouri State 44-10. The Fighting Hawks first division one playoff win in school history. Coming into Saturday UND was 0-2 in the FCS playoffs and hadn’t won a playoff game since 2007 when they called division two their home.

UND was led by a tremendous defensive effort giving up just 185 total yards on the day and a school-record eight sacks. Missouri State quarterback, Matt Struck, will definitely be waking up with some bruises on Sunday as UND pressured the passer all game. Holding MSU to only 97 yards passing. The tandem of Josh Navratil and Jaxson Turner rushing off the edges combined for four sacks on the day. Jaxson Turner moving just a half a sack short of second on the all-time UND sack leaders list.

Redshirt Junior Noah Larson did much of the heavy lifting for UND on defense. The linebacker from Baraboo, Wisconsin led the way with 10 tackles and a sack. Larson was all over the field Saturday but his biggest play may have been making the stop on a MSU 4th and 1 in the second quarter.

The defensive backs for UND wanted in on the fun as well, and no play was more fun than Hayden Gavins 90-yard interception return for a touchdown. Gavins went untouched after making the interception down the left side of the field with a group of blockers to help lead him all the way to the promised land.

Special teams continued to be a factor for this Fighting Hawks team. Forcing a fumble on a punt return and even provided points in the third quarter. On the MSU punt Jayson Coley crashed through the line and blocked the punt, the ball wobbled through the air and landed in the arms of Hayden Reynolds, who trotted it in for a touchdown. UND, astoundingly, returned four punt blocks for touchdowns in their last 11 games. Hats to the special teams coaching staff and unit for turning a rare play into a normality for this program.

On the Offensive side of the ball, the game was started with a bang. Freshman quarterback Tommy Schuster found the endzone on his first pass of the day, which happened to be a 50-yard pass to Garett Maag. The Hawks took the lead after only two minutes and twenty seconds and never looked back. Schuster was 6-6 passing with 144 yards and two touchdowns after the first quarter.

Only four minutes later, after a stop and establishing the rushing attack, the Hawks caught the MSU safety diving in on a flea-flicker leaving wide receiver Bo Belquist open. Schuster connected with him for the 48-yard touchdown pass opening the game to 14-0 after only six minutes.

A big story going into this game was the absence of staring offensive lineman Kyle Hergel. The sophomore Hergal entered the transfer portal this week leaving a large space to fill on the line as Hergal had started every game for UND the last two seasons. Head coach Bubba Schweigert turned to true Freshman Eastin Kilty. Kilty did his job as UND rushed for 141 yards on the day and did not allow a sack.

It was running back by committee this week for UND as four different back had carries in the game. Work horse and fan favorite Otis Weah was head to a season low 64 yards on 13 carries but was still able to score in his sixth straight game.

UND has been unbeatable at home recently as the friendly confines of the Alerus Center have provided 11 straight home wins. The Hawks will have to take their show on the road this upcoming week where they have not had the same success.

North Dakota will head to Harrisonburg, Virgina next Sunday to take on 3rd ranked and undefeated James Madison. A recent powerhouse of the FCS, James Madison has seen numerous conference championships and deep playoff runs in recent years. Famous for being the only school other than NDSU to win the national title since 2011.