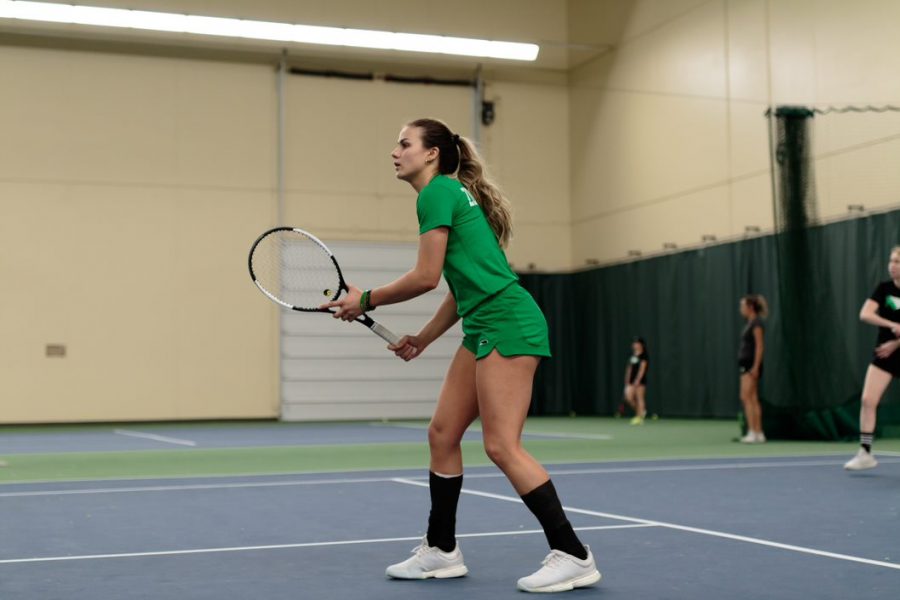 Both the men’s and women’s tennis teams continued Summit League play against the Denver Pioneers at home this past weekend. The Pioneers prevailed in both matches, defeating the women 6-1 and the men 5-2.

The Fighting Hawks struggled early, dropping the doubles point after losing both 1 and 2 doubles 6-2. Position three doubles remained unfinished at 4-3.

UND fared better in singles play. North Dakota’s top player, Sapir Sela, battled at the 1 position after dropping the first 6-7. Sela came back to capture the second set 7-6 to force a decider. Her effort was not enough, however, as she went on to drop the final tiebreaker 10-8 to Denver’s Anna Reidmiller.

The Hawks lone win came from Andrea Jansson at the three spot. She overcame the Pioneer’s Britt Pursel in straight-set 6-3 6-3 to earn her 3rd Summit League victory and 9th singles win this season.

Other notable performances came from Allie Ochoterena and Nina Zdravkovich. Ochoterena fought back after dropping the first set 6-0, she kept pace with her opponent in the following set before ultimately losing 6-4. Zdravkovich battled in her opening set, narrowly dropping it 7-6. She continued to fight until ultimately succumbing to Denver’s Camille Verdon-Anderson 7-6 6-2.

The men also struggled in the opening doubles play, with both 1 and 2 doubles losing 6-1 and handing the doubles point to the Pioneers. Position 3 doubles remained unfinished, tied at 3-3.

Despite the poor start, the Hawks began to find traction in singles. UND’s Number 1 singles player Gerhald Sullwald fought back from a set down to defeat Denver’s top player Matt Summers 3-6 7-5 10-6 to earn his fourth victory at the 1 position and his second Summit League singles victory.

North Dakota’s other win came from Edmound Aynedjian at the five spot. He overcame the Pioneer’s Peter Sallay in three sets 2-6 6-2 6-3 to pick up his second conference win 12th overall singles victory.

UND’s 5-2 loss is their best result against nationally-ranked opponents. Denver is currently ranked 45th in the country and 46th in the ITA coaches’ poll. The Pioneers’ win over the Hawks put them at a perfect 4-0 in conference play and clinched the Summit League title. The loss put North Dakota at 10-5 overall and 2-1 in conference play.

The Hawks next match is April 24th against conference rival UNO in Omaha, Nb.