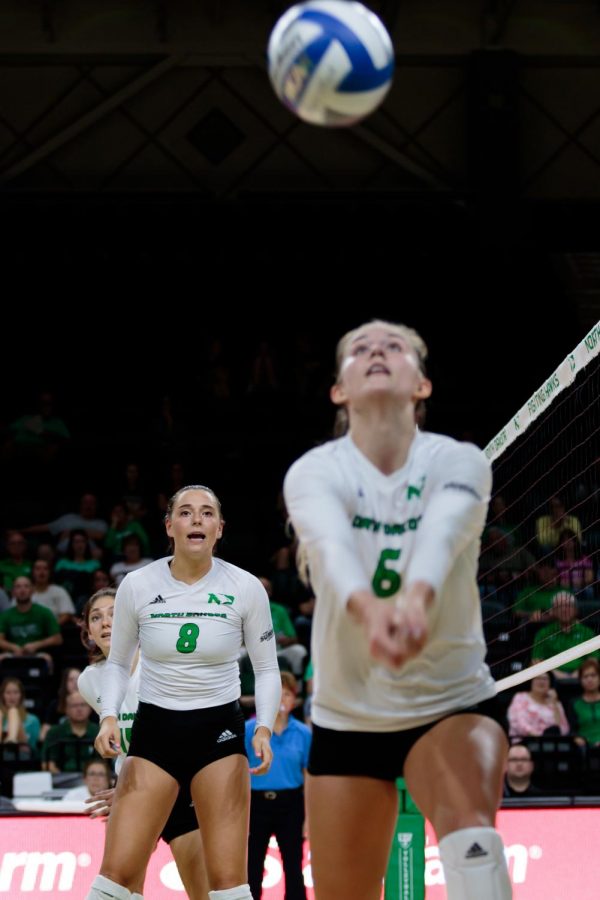 MACOMB, Ill – The UND Women’s Volleyball team continued Summit League play this past week going, up against the Western Illinois Leathernecks. WIU won both bouts, defeating North Dakota 3-1 in game one and 3-2 in game two.

The play was close in the first game, with the lead exchanging hands 3 times until UND tied the game at 18-18. Western Illinois then began to pull away on a series of timely North Dakota errors and a service ace and closed out the set 25-19.

The Leathernecks continued to dominate in the second frame. WIU pulled away early and never looked back. They racked up 15 kills and 4 service aces, taking the set 25-10.

The Fighting Hawks immediately responded in the next set, keeping pace with Western Illinois in the early part of the frame. UND began to pull away at 10-10, racking up 14 kills and taking advantage of 7 errors from WIU to capture the set 25-10 and reducing their deficit to 2-1.

Despite a dominating performance in the third set, the Hawks couldn’t keep the momentum. The Leathernecks started off strong in the fourth; they immediately took the lead and never looked back. WIU amassed 11 kills in the final set, winning 25-18 and taking game 1 3-1 and their first Summit League victory.

The second game began like the first, with the score staying close until the end. UND pulled away at the last second to nab the first set 25-23, taking advantage of 12 attacking errors from WIU, tallying 12 kills and a service ace.

Western Illinois bounced back in the following frame, jumping ahead early with aggressive play. The Leathernecks connected on 14 kills and forced UND into 8 untimely errors, easily capturing the set 25-9 and leveling the match 1-1.

The third set was tightly contested, with the Hawks keeping it close thanks to some errors from WIU. At 15-15, UND picked up the pace, scoring three points in a row from kills on Alexa Albinson and Sofia Hedqvist, eventually taking the set 25-19.

The Leathernecks responded immediately in the fourth. They nabbed an early lead with aggressive play around the net and never looked back. They took the fourth frame 25-21 and racked up 12 kills to UND’s 11.

The Hawks started the final set strong, taking the first three points on attacking errors from WIU. The Leathernecks responded with a flurry of service aces and a kill to take the lead 6-3. Despite some aggressive play from UND, it wasn’t enough to overcome Western Illinois as they took the fifth frame 15-12 and the match 3-2. The loss puts UND at 2-12 in Summit League play and 2-14 overall.

The Fighting Hawks will return to the court next Saturday, March 27 against NDSU. Live coverage will be presented by Midco Sports Network.