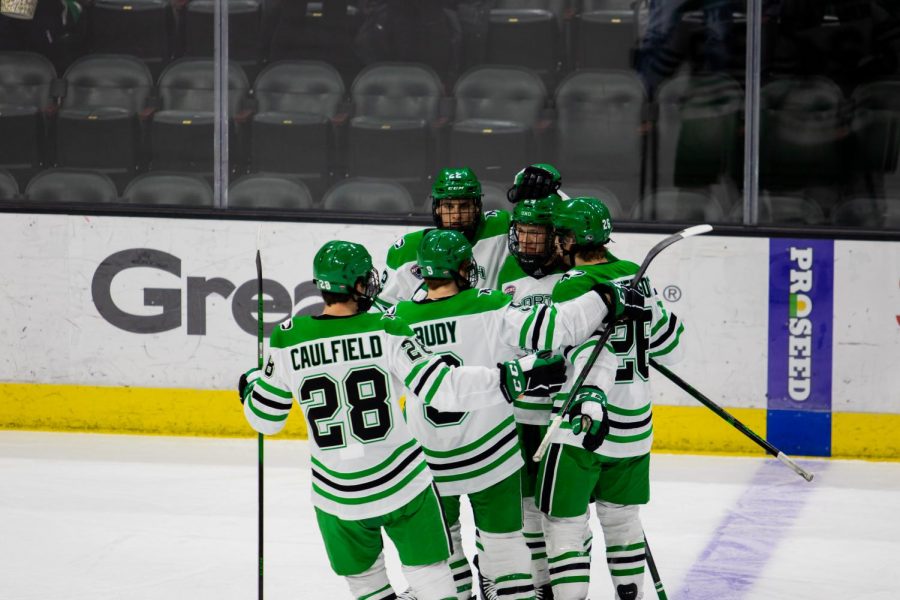 The University of North Dakota Fighting Hawks opened their 2021 NCAA Tournament run against the American International Yellow Jackets in a dominant 5-1 win. The number one team in the land controlled the game from the opening faceoff and it was clear their aspirations reached much farther than the first round. The NCHC regular season and conference tournament winners brought a physical brand of hockey to the ice Friday night, and hope to carry this momentum into Saturday’s game against Minnesota-Duluth.

In what seemed like a hit–and–run mentality, The Fighting Hawks came out firing and did the most damage in the first period. Scoring four of their five goals before the first intermission, then letting one of the nation’s best defenses take care of the rest.

Jacob Weatherby got the scoring started in the first, controlling a Jacob Bernard-Docker rebound off the boards and putting it in the back of the net. In less than three minutes, the Junior from Ashland, Oregon added another score to his total. After collecting the puck from a bad AIC turnover, Weatherby snipped the puck in for his 14th goal of the season. UND kept the pressure on with two more goals in the period coming from Grant Mismash and Collin Adams. Scoring four goals in the span of just seven minutes and 24 seconds.

Between the pipes for UND was the NCHC First team goalie, Adam Scheel. After a great season, Scheel backed up his year with an impressive performance. With 24 saves on the night and a solid defense in front of him, the Hawks held a shutout until late in the third period when AIC scored on a power-play slap shot from Tobias Fladeby.

North Dakota’s night could be summarized by a late shift in the third period. The talent of the team has always been there, but it was the technical things in which UND excelled in this game. Speed, physicality, and tape to tape passing were on display late in the game and showed what this team is capable of.

With under two minutes left on the clock, UND put the icing on the cake with its fifth goal. Collin Adams put home his second of the night after an assist from Senior captain Jordan Kawaguchi.

“Our guys were excited about it,” UND coach Brad Berry said. “They worked hard to get to this point. They’ve checked every box we’ve wanted them to check. We have a few more to go.”

The leaders of this Fighting Hawks team should be given some credit for this win. Earlier in the day, number four Wisconsin fell in a huge upset to Bemidji State. UND must have seen this and taken advantage of it. Seeing a favorite in the tournament be knocked out so early must have been sobering for the number one team in the country. No team is invincible, and the Hawks came out firing, determined not to follow in Wisconsin’s footsteps.

After the University of Michigan was forced to pull out of the tournament due to complications with the COVID-19 virus, Minnesota-Duluth was given a free pass to the regional finals. North Dakota will have to find a way past their NCHC rivals and two-time defending national champions if they want to head to their 23rd Frozen Four in Pittsburgh. The final from Fargo will air Saturday night at 6:30 CDT on ESPNU.