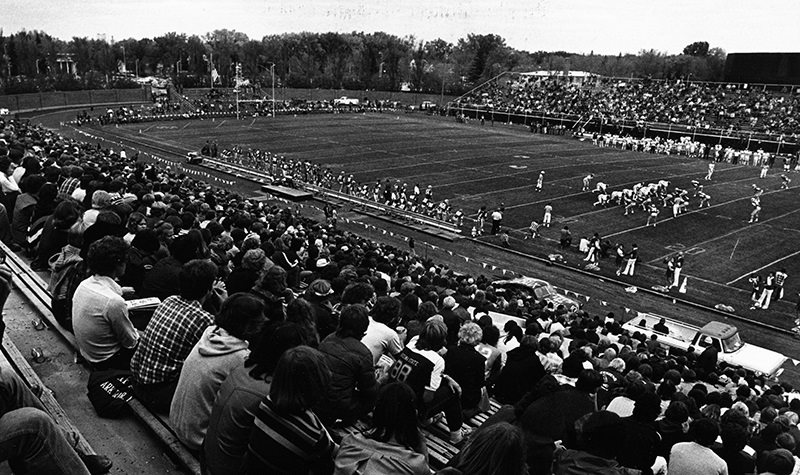 Three o’clock at Memorial Stadium. For any UND student, the phrase could have a variety of meanings. For a football fanatic in the 80s, it could be kickoff. A high school track star may know it as when their championship event started. A Reserve Officers’ Training Corps (ROTC) student may groan at the thought of their grueling workout on the field or worse – the stairs. A dreaded meeting with the head coach? A freshman class photo? Three o’clock.

Memorial Stadium began and ended at three o’clock. Its opening ceremony began at 3 p.m. on October 27, 1927, and almost one hundred years later, on March 9, 2021, its recognition ceremony – signifying the end of the stadium – began at three bells after. Current UND President Andrew Armacost noted this similarity between the two ceremonies, saying the team who put together the livestream had unknowingly planned it to start at 3 p.m., only discovering the coincidence later on.

Live-streamed on both the University’s Facebook and Youtube pages, the ceremony began with a short photo montage with audio voiceover narration of Memorial Stadium’s history. This stadium was built to honor previous UND president Webster Merrifield and the 33 students who fought during World War I.

Coaches of the past and of the present reminisced about their times in Memorial Stadium, particularly the mammoth, wooden desk occupying their office. They shared the same question, “How could a desk this big have been moved into the office?” Laughing, current UND football Head Coach Bubba Schweigert pondered if the office had been built around the imposing desk. From program reviving wins to do-it-yourself construction, Memorial Stadium holds fond memories for both coaches and players alike.

To commemorate the fallen WWI soldiers, taps was played at the first game at the stadium, and the names of each soldier were read. To honor that tradition, UND ROTC students retired the colors as taps was played. Cadet Chris Devine presented the retired flag to President Armacost, and that same flag will be flown again when Memorial Village is completed.

When the construction crew removed the stadium’s capstone, a time capsule was discovered, and its contents were revealed on the livestream. The time capsule contained copies of local publications, including the Dakota Student, Grand Forks Herald, and UND’s alumni magazine. Tickets for the stadium’s first homecoming game and the press release regarding the work for the project were also found in the box. These artifacts are being preserved and will be housed in the Elwyn B. Robinson Department of Special Collections at the Chester Fritz Library on campus, President Armacost stated on the livestream.

Finally, closing out the presentation, the 33 UND alumni who fought in WWI were once again recognized in a slideshow with each of their names presented.

Reactions to the livestream were positive, with Robert Purdy commenting on the Youtube stream, “Great program – a moving tribute to one of the classic buildings on campus. Great job UND!” after the presentation ended.

Others were not as fortunate to watch the livestream in real-time. UND alumni Connie Blatherwick was saddened to hear that she had missed the livestream for Memorial Stadium. She ran track for the university from 1977-1983 and later coached the school’s track program in the early 2000s. Her fondest memory of the stadium was not her own athletic exploits but rather watching her son, Joss Blatherwick, compete and win at North Dakota’s state high school track meet.

The Memorial Stadium presentation has since been uploaded onto the University of North Dakota’s Youtube page for viewing.

Claire Weltz is a Dakota Student Opinion Writer. She can be reached at [email protected]