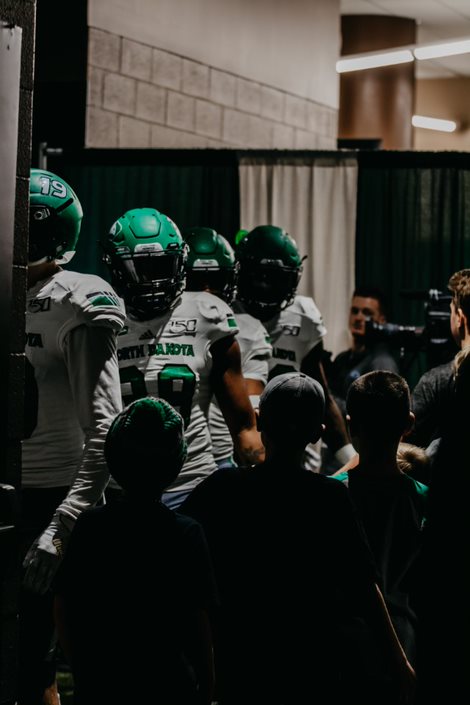 The Fighting Hawks earned a huge upset over the No.3 South Dakota State Jackrabbits this past Saturday at the Alerus Center. This win came over UND’s highest-ranked opponent since becoming a D1 school in 2008.

The Jackrabbits started the game off strong, scoring their first touchdown in the first 3 minutes on an 18yd pass SDSU QB Mark Gronowski to Jaxon Jankie, needing only 5 plays and taking an early 7-0. UND couldn’t respond until 1 minute remaining in the opening quarter. After an 8–minute drive, Otis Weah rushed 1 yd for a TD, a good kick from Adam Stage tied the game at 7-7. South Dakota scored immediately on the following play on a 76 yd run, putting them up 14-7 at the end of the first quarter.

Most of the second quarter was uneventful, with no one crossing the goal line. SDSU started the quarter with a 6–minute drive, ending with an incomplete pass and gaining 39 yards. North Dakota followed with their own long drive, gaining 40 yards to end the half with the Jackrabbits leading 14-7.

UND started the second half with a 75yd drive with Luke Skokna rushing for a 1-yard TD, tying the game at 14-14. SDSU responded with a field goal on their subsequent drive, putting them up 17-14 with 6 minutes remaining in the 3rd quarter.

With 17 seconds left until the final period, the Hawks scored a touchdown on a pass from Tommy Schuster to Garret Maag for 16 yards. This gave UND their first lead of the game, 21-17.

North Dakota continued to dominate in the fourth quarter, adding another touchdown to extend their lead to 27-17. They also stopped the Jackrabbits twice and got a crucial interception with 5 minutes left. The Fighting Hawks finished the game up 27-17, putting them 2-0 on the year and undefeated against ranked opponents, defeating No.23 Southern Illinois 44-21 last week.

UND had several stellar offensive performances. Fighting Hawks Quarterback Tommy Shuster went 20 for 34 and threw for 154 yards, putting up his best numbers since joining UND. Running back Otis Weah rushed for 88 yards, had 17 touches and a career-high two touchdowns. Wide receiver Garret Maag had 5 catches and ran for 87 yards with 1 touchdown.

The Hawks also thrived on the defensive side of the ball, forcing 7 turnovers and picking up 3 sacks. Linebacker Josh Navrati amassed 5 tackles and a crucial 4th quarter sack on a 3rd down that kept the Hawks in front. Jaxson Turner picked up his first sack of the season and forced Jackrabbit QB Mark Gronowski to fumble which was picked up by UND’s Griffin Lickfeldt.

UND football will retake the field next Saturday against Western Illinois in Macomb, Ill. Live coverage can be found on ESPN+.