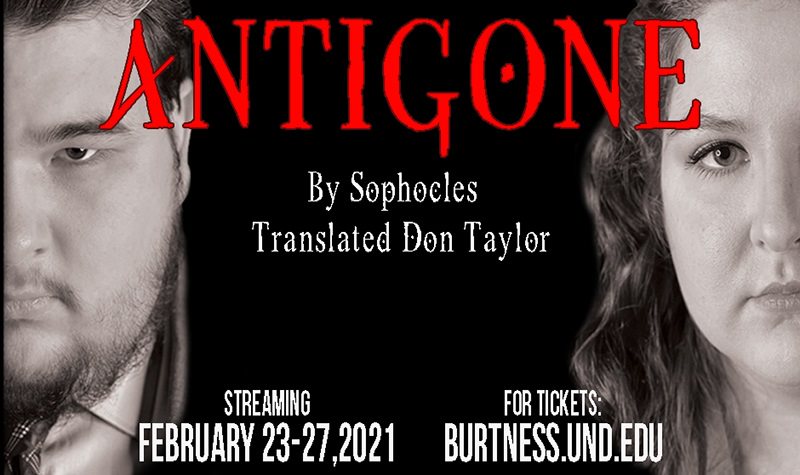 The University of North Dakota’s theatre department is once again hosting an online production for the University and Grand Forks community. This spring, they will be performing the play Antigone, a classical Greek tragedy that follows the story of a young woman named Antigone played by Katie Germain and her act against newly crowned King Creon acted by Kyle Mason.

Antigone is a Greek legend of a daughter born of the unwittingly incestuous union of son and mother. Once Antigone’s father, Oedipus, discovers the truth about him and his mother, he blinds himself and is sent to exile in Thebes. Antigone and her sister Ismene serve as guides to Oedipus until his death near Athens. Antigone and Ismene also have two brothers, Eteocles, and Polyneices. Before the death of Oedipus, it was agreed that these two brothers would take the throne one year to the next. However, after one year on the throne, Eteocles, the eldest, refused to step down. Polynices, along with six foreign princes, declare war on Eteocles and march to Thebes. Unfortunately, both brothers kill each other in a duel.

King Creon gives an elaborate funeral to Eteocles, but Polyneices buries in an unmarked grave. Antigone, under cover of the night, gives her brother, Polyneices, a proper funeral. Both of these characters offer strong arguments about what is morally right, but only one can be victorious in this tense family drama.

This 2000-year-old play’s dramatized conflict between loyalty, youth, and strength still remain within today’s society. There is a constant struggle to define what it means to be human.

For the health and safety of audience members, UND Theatre is only offering this production online. Tickets will be $13 for an individual, and group tickets will be priced at $20. Group tickets all the show to be viewed by multiple members of a group or household. Tickets can be purchased through the UND Theatre’s online box office at burtness.und.edu or call (701)-777-2587. This show will be streaming live from February 23 through February 27. A classic tragedy performed by the University’s best in the comfort of your own home.

Elise Unterseher is a Dakota Student Arts and Community Editor. She can be reached at [email protected]