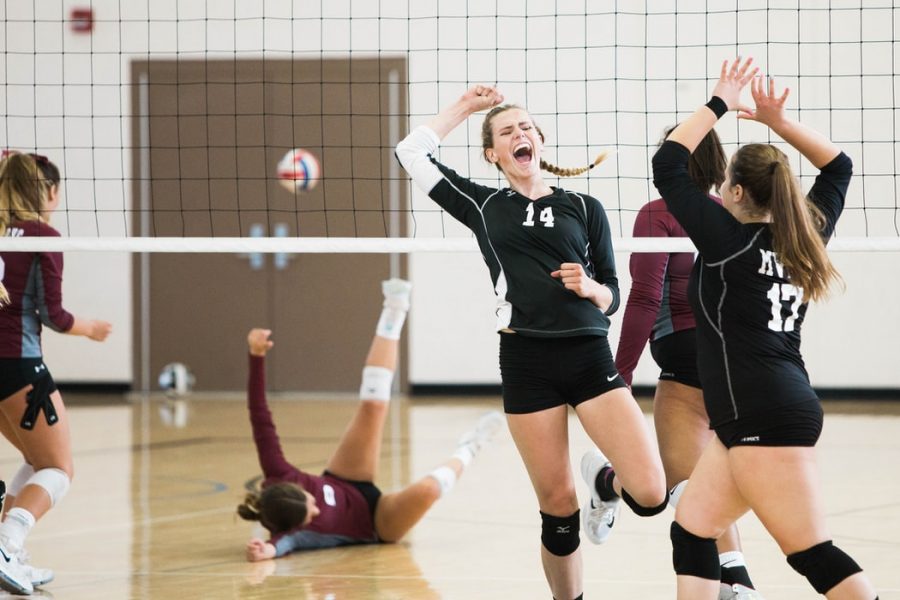 The UND women’s volleyball team traveled to Tulsa, OK this past weekend to take on Oral Roberts in their first two conference games. The Fighting Hawks swept the Golden Eagles in two 5 set thrillers to begin conference play undefeated.

The first match started off with strong play from both sides with the score remaining close until UND took a 30-29 lead with an opportunity to win the first set. The Golden Eagles weren’t phased, however, and were able to convert the next three points to capture the first frame 32-30. Despite this, the Hawks were able to respond in the second, jumping out to a 19-4 lead and eventually take the set 25-8.

The third set went to ORU 25-15, as the Golden Eagles were able to rack up 17 kills, 4 service aces, and capitalize on 4 errors from the Hawks. The fourth set was tightly contested, and play remained close until a successful attack from UND’s Sara Antic put the Hawks up by one 26-25. An attacking error from ORU’s Jaxie Wakly handed UND the set 27-25 and tied the match at 2 sets apiece.

The final frame remained close, with the lead changing hands 3 times until they were tied at 8-8. The Hawks rallied, scoring 7 of the next 9 points to capture the decider 15-10, and win their first conference game of the season.

Lexi Ahrens was UND’s top scorer, notching 17 kills with a .447 hitting percentage followed by Sara Antic and Taylor Reidl, who each got 12 kills from the outside. ORU committed 34 attacking errors while only executing 19. The Hawks out-blocked Oral Roberts 9-3 and had 12 service aces, a +4 ratio over the Golden Eagles.

The second match started with strong play from UND as The Hawks jumped to an early 8-2 lead. North Dakota maintained their lead and cruised to a comfortable first set win 25-16. The second frame again saw UND holding an advantage early, being up 8-5. The Golden Eagles quickly responded, however, and were able to amass 14 kills and capitalize on some untimely errors from North Dakota to win the set 25-18.

Oral Roberts continued their winning play into the third frame. They notched 13 kills and only committed 1 error to UND’s 12, picking up the set 25-13. The Hawks were able to rebound in the fourth, making 9 errors and getting 12 kills. ORU finished the set with 10 attacking errors, giving the frame to UND 25-20.

The final set was closely contested with both sides playing aggressively. At 10-10, The Fighting Hawks were able to pull away with the next 5 points with 4 kills and an attacking error to capture the set 15-10 and the match 3-2.

Taylor Reidl was the top scorer for the Hawks, racking up 16 kills followed by Lexi Ahrens with 14. UND managed the win despite having a lower hitting percentage, .120 to ORU’s .161, more attacking errors and fewer kills. This puts UND 2-0 in Summit League play and 2-2 overall.

UND volleyball will be back in action on February 7,  at 1 p.m. against the South Dakota State Coyotes at the Betty Engelstad Arena in Grand Forks, ND. Live coverage can be found on MidcoSN.