Green and White triumph in exhibition 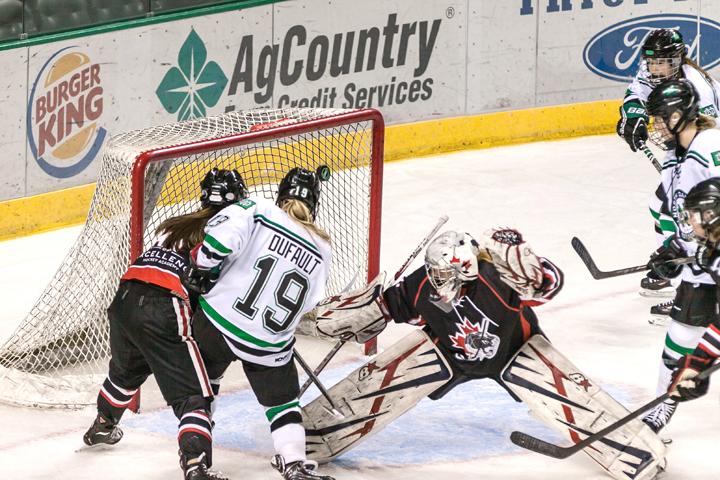 Sophomore forward Meghan Dufault shoots the puck into the net Friday evening at the Ralph. Dufault contributed a goal in the third period en route to a UND victory. Photo by Keisuke Yoshimura.

The UND women’s hockey team got off to a strong start Friday night in its first action of the season.

The game was an exhibition match against the Pursuit of Excellence Hockey Academy from Kelowna, B.C., Canada. UND claimed a 12-1 victory in front of 1,357 fans in Ralph Engelstad Arena.

The scoring started just 42 seconds into the game when junior Andrea Dalen tallied her first goal of the season. Two more goals were added to UND’s score by senior Michelle Karvinen and redshirt freshman Marissa Salo, before the first period ended increasing North Dakota’s lead to 3-0.

The second period scoring was also started by UND as Josefine Jakobsen scored to make the score 4-0, 13 minutes into the second period. North Dakota added three more goals from freshmen Gracen Hirschy, Susanna Tapani and Kayla Gardne. POE got on the board with its only goal of the game scored by Amy Potomak with 16 seconds left in the second period.

UND took over on the scoreboard in the third period with three more goals before the regulation time ended thanks to Jakobsen and sophomores Meghan Dufault and Tanja Eisenchmid. The final regulation score was 10-1, but fans also were  able to see overtime action and a shootout between the two teams.

Strong until the end

A five minute four-on-four overtime was played following regulation. Karvinen and freshman Lisa Marvin contributed to UND’s advantage by adding two goals and didn’t allow POE to add a mark on the scoreboard.

Following the overtime, there was a five-round shootout. POE’s Potomak scored once again while UND sophomores Shannon Kaiser and Becca Kohler each scored to give North Dakota the 2-1 advantage in the shootout.

The final score was 12-1, thanks to strong offensive play and shots favoring UND, 60-11, with time split in the net between all three of UND’s goaltenders. Shelby Amsley-Benzie and Lexie Shaw stood in between the pipes for 20 minutes and Amanda Koep was in the net 25.

One of the keys that UND coach Brian Idalski was proud of was the low amount of individuality he saw.

“We didn’t get too individual,” Idalski said. “I mean, I thought for the most part we tried to move the puck and make plays and didn’t try to do it all ourselves. I think overall we’re pleased with the flow and just our effort.”

Senior forward Michelle Karvinen was impressed by the cohesion within the team.

“I think especially defensively having D’s that can step up and be a part of the offense  in all lines is something that is going to be huge for us this year, and I think that was the thing that stood out for me today,” Karvinen said.

For freshman Hallie Krzyzaniak, it wasn’t just about things to work on, but also the first time she skated in a North Dakota jersey. Krzyzaniak was a product of POE’s system before making it to UND and tallied an assist in her first college game.

“For my first college hockey experience, I would have to say it was pretty surreal,” Krzyzaniak said. “I mean, you train for it and you dream about it for years and then to actually be out there and be standing on the blue line, it was crazy — it was awesome.”

UND will begin its regular season this Friday and Saturday in Ralph Engelstad Arena against Lindenwood. Both games will start at 7:07 p.m.