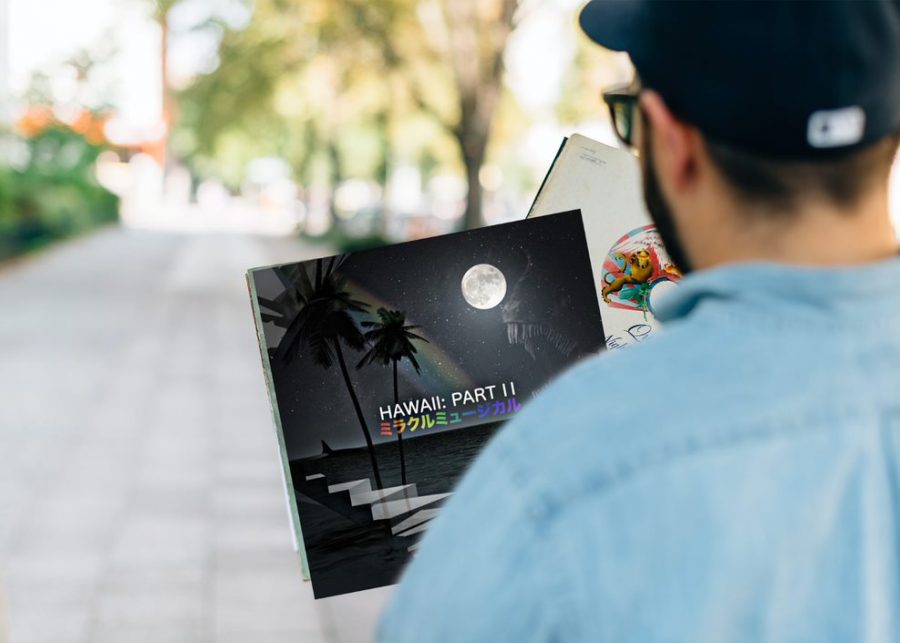 During the beginning of quarantine in March, I had discovered an album through TikTok called “Hawaii: Part II” and listened to it non-stop, so I thought it would be fun to revisit the album and do a review on it. “Hawaii: Part II” is listed as being by ミラクルミュージカル or Miracle Musical which was a solo side project by Joe Hawley. Joe Hawley is also the guitarist and vocalist for the band Tally Hall which is why some of the songs in the album came from demos and ideas from the band. The album was released on December 12, 2012, and is approximately forty-five minutes with a total of eleven songs. The album is described as having a genre of infinity expressed through hologram featuring themes of outer space, ancient mysticism, tropical paradise, parallel universes, love, death, and magic which can also be inferred by the unique album cover.

After is the song, “Black Rainbows” which has a somewhat different tone than the two before it. The writers of the song are Ross Federman and Joe Hawley, and the lead singers are Madi Diaz and Joe Hawley. This song starts out with lyrics in Hawaiian naming the colors of the rainbow plus the color black and the phrase “Stella octangula” which is Latin for eight-pointed star. “Black Rainbows” is about the love the protagonists in the story have for each other with the rainbow representing the complex feelings that are difficult to describe.

Next is “White Ball” written by Joe Hawley, Bora Karaca, and Zubin Sedghi and lead singers being Zubin Sedghi and Stephanie Koenig. I would say the theme that this one fits into would be outer space. “White Ball” ultimately describes the problems that both protagonists are facing in their relationship with it possibly ending without them realizing it.

This next song, written and sung by Joe Hawley, has a bit of a darker tone to it which would make the title “murders” make sense. In terms of themes, it brings out the theme of death Hawaii: Part II album is described as having. The story of “Murders” is interpreted as an abusive relationship with the story being told by a bystander because of the lyric “I was in the middle ground.” It also contains the lyrics “All for nothing at all” which is the climax of the story being told in the song that I have seen make a re-appearance on TikTok recently.

The next song is mainly in Japanese with a few English lyrics sprinkled in and the bridge of the song is in French. The title is “宇宙ステーションのレベル7” which translates to “Space Station Level 7” and the writers for this song were Joe Hawley and Bora Karaca with the lead singer being Bora Karaca. What I first thought when I heard the song was that the beginning reminded me of Pokémon. In terms of theme, “Space Station Level 7” contains outer space because most of the lyrics are about leaving earth then departing from heaven.

The song “The Mind Electric” is probably the most unique in the album and was even one of my personal favorites for a while. What makes it so interesting is that first the entire song is played in reverse and then it is played normally which is why this song is 6 minutes long. “The Mind Electric” song also has a dark theme to it because it’s about someone being condemned to the electric chair.

Next is a song called “Labyrinth” which was written by Joe Hawley, Shane Maux, and Charlene Kaye and lead singers being Shane Maux and Charlene Kaye. While its song departs from the musical theme of the rest of the album by containing rap, it does stick with a common theme in the album which is death with other themes such as panic, destruction, and personal turmoil.

Up next is one of my personal favorites of the album called “Time Machine” written and sung by Rob Cantor and Joe Hawley. This song was first performed with Tally Hall, going through three demos until the fourth and final version was released. While “Time Machine” sounds upbeat, the lyrics suggest it’s about someone’s life falling apart and them wanting to go back in time.

The second to last song “Stranded Lullaby” was written by Joe Hawley and Allison Hanna with the lead singer being Joe Hawley. This one seems to be a reference to or continuation of the story in “Isle to thyself” mainly because the theme of being lost at sea appears to be a common occurrence in the lyrics. “Stranded Lullaby” is also one of my favorites because of the calm sounding instrumentals and soft singing.

The final song of Hawaii: Part II is called “Dream Sweet in Sea Major” written by Joe Hawley, Bora Karaca, and Allison Hanna and sung by Joe Hawley. It song is the longest in the album at seven minutes and acts as a final goodbye as it packs up and searches for a new adventure. “Dream Sweet in Sea Major” song also contains many references to previous songs in the album.