NFL season kicks off in front of…no one 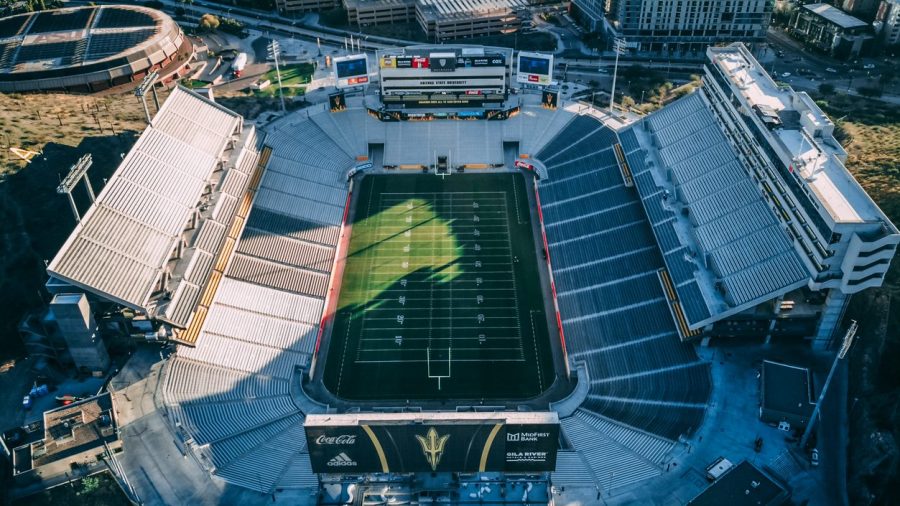 When the opening kickoff of the 2020 NFL season sailed down the field to begin play it became evident to everyone watching that this would not be a normal season. It wasn’t the distance or the speed of the kick that boomed out of the endzone, but it was the sound. The thundering sound of the Butker kick filled the stadium in ways many people have never seen before. Living rooms across the country quickly concluded that this wasn’t due to the addition of sound, but the subtraction of it. Normally loud stadiums became quite as fans have been unable to attend games due to COVID-19. Those empty seats will not only impact the bottom line of billionaire owners but may also affect the outcome of the game itself.

In Arlington, Texas sits the gem that is AT&T Stadium. A behemoth of steel woven into a sporting cathedral that all but prints money for owner Jerry Jones. When the Dallas Cowboys moved into their new home in 2009 average tickets prices jumped from 84 dollars to 110 as its glamour began to attract fans whose intent may not be watching their Cowboys hit the field.

In his 2017 book The Arena, Rafi Kohan describes his experience after a game at AT&T. “At the game I attend, the Cowboys lose a close one. But you would not know it from the live postgame concert in the West Plaza. In front of the stage, hometown and rival fans shake their hips to a cover version of “For the Love of Money” by the 0’Jays (seriously), as marked up booze flows from the bars behind them in the Miller Lite Corral.”

Like many owners in the modern NFL, Jerry Jones has begun creating a stadium experience that puts the product on the field 2nd behind in-stadium ambiance designed to have people spend money. In the case of Dallas, that has worked, reporting a league leading revenue per home game of 118 million dollars.

As the season opens with no fans in attendance, this loss will not spell the end for these massive teams, but it will certainly hurt. Owners will not be the only ones to feel this loss as under the current NFL collective bargaining agreement 47 percent of all football related income is allocated to the players. This may not damage the league’s elite but for players collecting the league minimum $610,000 dollar contract it will be felt.

Where the players are more likely to feel the absence of fans is during the games. After the first week of games many players felt the hollowness of the stadiums. Green Bay Packers quarterback Aaron Rodgers was thrown off by the silence in Minnesota week one saying, “One of the strangest experiences I’ve had in the NFL to be in a stadium like this and have memories of some really rockin’ times. Just a different atmosphere. This is a tough place to play with noise, as is Lambeau, so it’s going to be strange next week to not hear our fans either.”

In many stadiums around the league artificial crowd noise was pumped into the stadium to account for the empty air. One of those stadiums was the normally deafening Superdome in New Orleans. According to reports, the limited number of staff that were deemed as essential tried their best to make as much noise as possible to aid the team but as the game went to a commercial break and the artificial noise stopped, and an otherworldly silence covered the dome.

Some players have argued that is fake crowd noise may make the playing conditions more difficult. Tom Brady discussed how unlike the natural crowd, whose volume fluctuates throughout the game, the current system acts as if the crowd is as loud as possible the entire time. “If that’s how loud it’s going to be, that’s going to be tough for everybody. The communication’s tough, and you don’t have a down moment. You’re screaming the whole day to people on the sideline, which is very unique to a game because normally it ebbs and flows.”

Although there are many downsides to the empty stadiums of the current COVID era, we as fans are thankful for the return of the game we love. Ready for a time when we can return to our ancestral sporting homes with our fellow bleacher bums to create an atmosphere other teams fear.