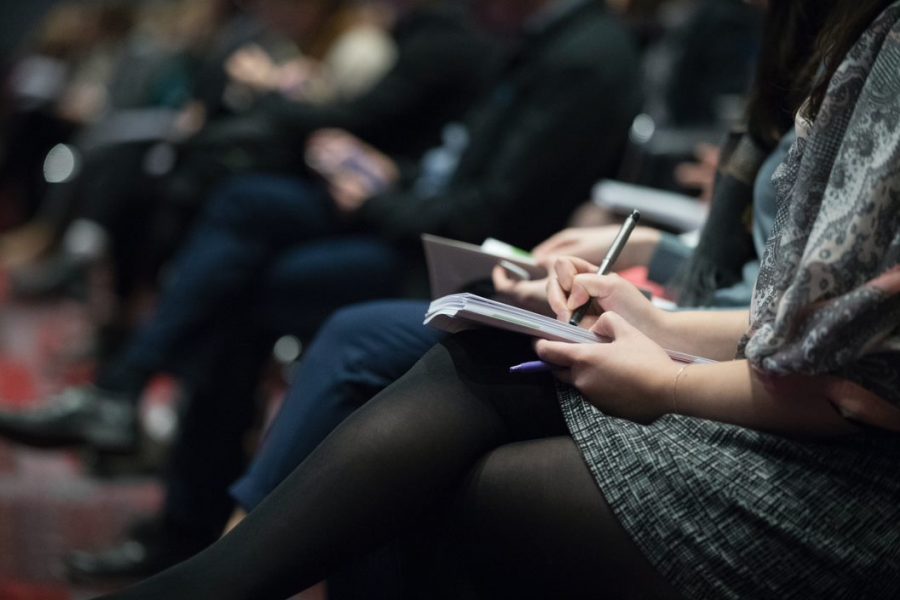 On Thursday, Sept. 24, The University of North Dakota held another UND’s Writers Conference. During this conference Ms. Zhang read from her debut story collection, Sour Heart, which tells the experience of adolescence through the eyes of young Chinese American girls growing up in New York City. Sour Hearts was the winner of the Los Angeles Times Book Prize, the PEN/Robert. W. Bingham Prize for Debut Fiction and was a Barnes and Noble Discover Great New Writers pick.

The New Yorker writes, “Jenny Zhang’s Sour Heart combines ingenious and tightly controlled technical artistry with an unfettered emotional directness that frequently moves, within single sentences, from overwhelming beauty to abject pain.” The collection has been optioned for film by A24, the film is being written by Jenny Zhang and Cathy Yan.

In 2012, Zhang published a book of poetry titled, “Dear Jenny, We Are All Find.” Jenny’s second collection of poetry, “My Baby First Birthday” was published in 2020 from Tin House Books. Dorothea Lasky writes, “Jenny Zhang will always be one of the most important poets writing today. She consistently and constantly stretches the lyric to its necessary and best intentions, telling it where it only may dream or dare to go.” In addition to her fiction and poetry, Zhang’s essays have been published by the New York Times, BuzzFeed, and Rookie. Her essay “How It Feels,” which is a meditation on depression, suicide, and excess, was published in Poetry Magazine and a finalist for a National Magazine Award. Ms. Zhang has also written for television and worked for HBO and Facebook Watch.

Ms. Zhang is a graduate of the Iowa Writers’ Workshop and Stanford University. Not only has Ms. Zhang written books and poetry but she has also taught English at a lycée in the South of France and in a Hungarian mountain village on the side of the Romanian border. She currently lives in New York City where she’s at work on a novel and screenplay.

When asked about the collaboration of the movie adaptation of her book Sour Hearts with Cathy Yan Ms. Zhang sounded enthusiastic. Zhang explained how she was so excited when her book was published and was sure Hollywood would be knocking at her door as she put it, her book was not immediately noticed so when she found out an executive wanted to option the stories in her book she was shocked. She went to a meeting with the executive who decided to not option the stories. At first, she was disappointed and hopeless, but a few weeks later A24 who was responsible for making the movie ladybird and Midsommar decided they wanted to option the stories from her book. She was later asked if she wanted to write the adaptation with someone with more experience who ended up being the very talented Cathy Yan. Ms. Yan was the director of Birds of Prey, the movie following Harley Quinn and several other strong female characters in a very empowering and strange journey of self-discovery and self-empowerment. Knowing this it is understandable as to why Ms. Zhang is so thrilled to be collaborating with Ms.Yan.

Later in the reading, someone asked Ms. Zhang what it was like writing about different characters with her name. She explained that she went through a very bratty period where she named all the characters Jenny because people would ask her if the stories were based on her real-life which irritated her because people thought she was just copying the stories out of her diary and that she was unimaginative which was untrue. She decided to just continue to name the characters Jenny to confuse people because a thousand different things have happened to Jenny. Zhang said it helped her feel less restricted by other people’s expectations and assumptions and free herself in her writing.

When asked about what she hopes to accomplish with the film adaptation of her book she says there is something about seeing real human beings embodying a character that she has only envisioned in her head it feels very empowering and that it is very beautiful to see stories about the strange beauty and nostalgia of childhood come to life. Towards the end of the meeting, she was asked if there was any significance in the name of her book. Ms. Zhang explains that sourness is a very interesting personality trait and how the best compliment you could give a little girl when she was young was “oh she’s so sweet” and how the worst diss you could give a girl was “she’s a very sour person”. She continued to explain that she liked the idea of all the different shades of meaning and how she loved sourness.