CLOTHING Student senators may continue to wear gear with the old logo. 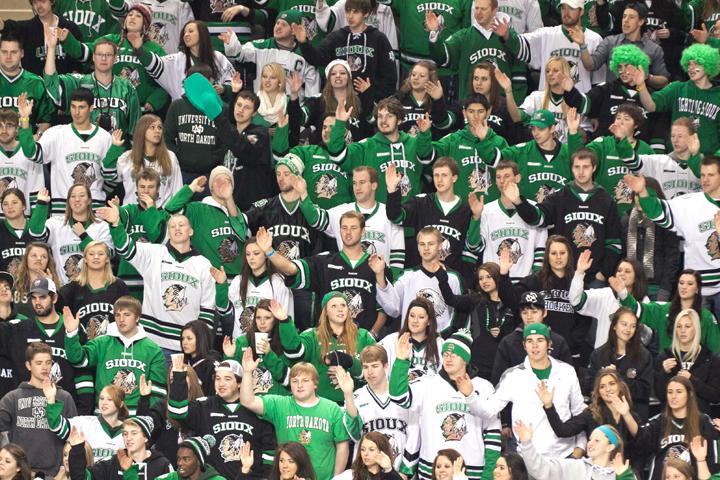 Students wearing Sioux gear at a UND hockey game last year. Various organizations on campus are putting restrictions on wearing such gear after the nickname was dropped. File photo.

A proposed ban on wearing Fighting Sioux apparel was not approved in student senate.

“The entire section on dress was stricken, so the references to the logo are no longer a part of the proposed bylaws,” Student Body President Nick Creamer said. “In the past, it hasn’t been an issue, as most senators generally do not where items of apparel with the logo on them at meetings.”

Other student officials at UND also seem to have adopted this unspoken rule of not wearing Fighting Sioux apparel.

Director of Residence Life and Services Cindy Spencer said she has asked resident assistants not to wear the Fighting Sioux clothing while they are on the job.

“This has been something that we have asked, as I feel that the department should be neutral, as we represent all our students, and that group has  a variety of views and opinions regarding the recently retired Sioux logo,” Spencer said.

Although senate decided that they are not opposed to student senators wearing Sioux gear, other organizations across campus will continue to make the decision for themselves of whether to allow Sioux gear or not.

Ashley Marquis is a staff writer for The Dakota Student. She can be reached at [email protected]