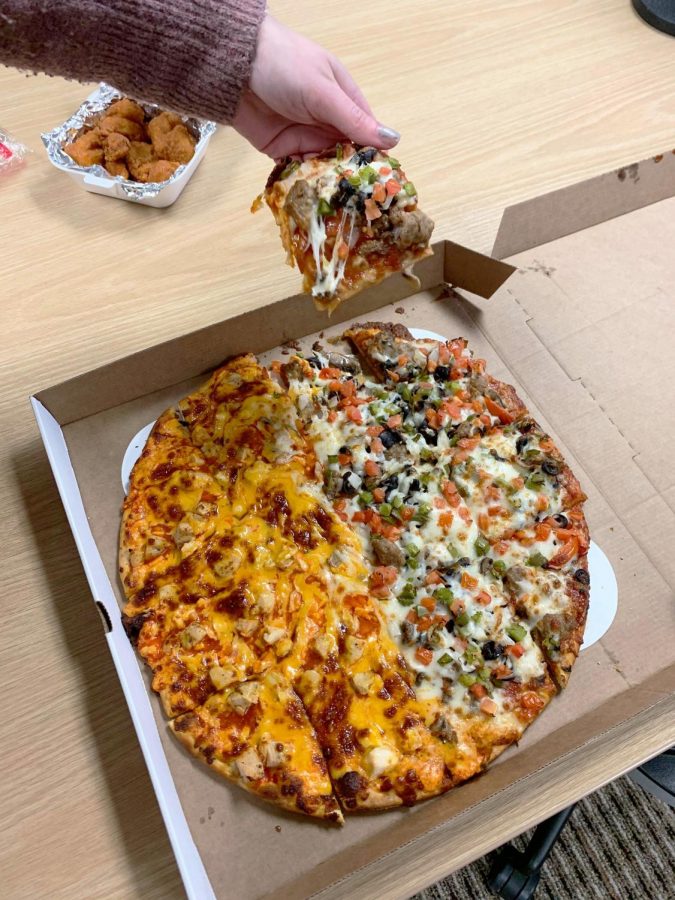 Boss’ Pizza & Chicken hit the Grand Forks community a couple of months ago, and I decided it was time to review their food.

They have a great location, being only about a mile away from campus, it is convenient for students and it is easy to get to. Boss’ is just off of 42nd street and is connected to the Baymont hotel, which is across from the Alerus Center.

Entering into the restaurant, they have a pretty big space. You have the option to sit in or order take out and they even offer delivery. Although their space is rather large, they don’t have a lot of tables for seating. The furnishing is rather plain, however, they do have a pinball and claw machine that can be a fun option if you are waiting for take out.

They have a very extensive menu which makes choosing a meal difficult if you are indecisive. They have an array of appetizers that include wings, mini tacos and toasted ravioli, just to name a few.  Besides having a long list of specialty pizzas and different wing options, they also serve pasta as well as dessert.

I ordered a pizza, that was half “The Boss” and the other half was “Buffalo Chicken Pizza”. It was ready in about 15 minutes, which I thought was pretty quick.

I was told that “The Boss” is their most popular and best selling pizza. The toppings for this include pepperoni, Canadian bacon, Italian sausage, beef, onions, mushrooms, black olives, green peppers, tomatoes, and extra mozzarella cheese.

Although this sounds like an overload of toppings, it did not disappoint. The crust was thin, which I personally like. It was an interesting ratio but I liked it. By this, I mean that there were a lot of toppings compared to crust but it all seemed to even itself out.

The “Buffalo Chicken Pizza” looked pretty greasy, but it tasted great. In order to enjoy it, you definitely have to like a little bit of spice but, as most midwesterners do, I drenched the pizza in ranch and that seemed to help. The crust was also thin on that side which wasn’t sturdy enough for this pizza so it was a little soggy, but the overall taste was good.

If you enjoy thin crust pizza and quick service, I would recommend Boss’ Pizza & Chicken. The only downfall is the cost. I do think that this place is rather expensive, especially if you are on a budget.

I would recommend this place and would urge people to try it, especially if you are looking for a new pizza place!