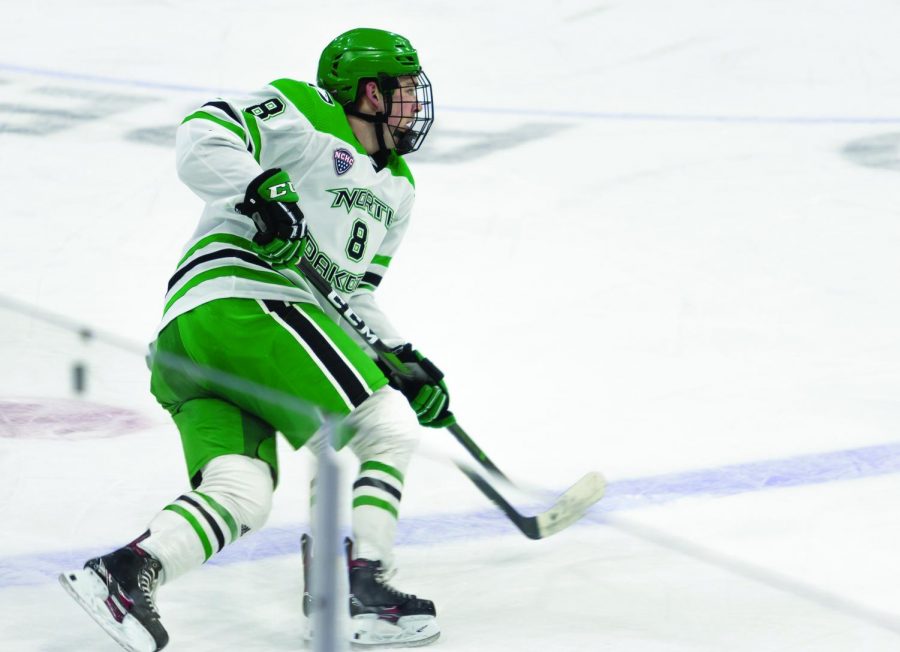 Heading into the weekend, UND needed a sweep of a tough Western Michigan team in order to clinch their share of the Penrose Cup. They opened up that on Friday night with a change in net as Adam Scheel got the call after not making a start in the last eight games. Scheel answered the call making 26 saves on 27 shots in a great goaltending performance setting the team up for success. Coming up huge in the third period saving more shots than he had in the first two periods combined.

Although UND was outshot 27-21 on the night, the chances created by the team felt more dangerous with each one seemingly begging to go in. With the first goal on the night, Judd Caulfield scored the backhander on a 3-on-2 rush. After that, it was Michaud’s deflected shot to close the game out on the power play.

UND showed discipline throughout the contest only allowing one power play all night.

“We knew it would be a hard-fought battle, and it didn’t disappoint,” Head coach Brad Berry said. “I’m proud of our effort. That team battled hard, and I know we did, too.”

With the win on Friday night, this opened the door for the university to win a share of the Penrose Cup with a win or a Duluth loss on the night. On senior night, as it was the last regular-season home game of the year, the stage could not be set any better.

The game started off with a bang as only four minutes into the game, UND found the back of the net. Collin Adams collected the rebounded Colton Poolman shot and put it in from an extremely tight angle on the left side.

From there the offense cooled as Western Michigan’s Paul Washe tied the game up late in the first and after a scoreless second, they headed to the third with the Broncos looking like the better team on the night.

In a great goalkeeping battle, Adam Scheel got the call in net again and made 15 saves on 16 shots. His opposite for Western Michigan, Ben Blacker, made a ridiculous splits save late in the 3rd period to keep the game tied at 1. It would take overtime to settle this one at the Ralph.

And it felt like it was over before it even began. Western Michigan appeared to have won it just one minute into overtime but as the Broncos celebrated and boos echoed through the Ralph the refs began reviewing the goal for goaltender interference. As the replay showed Jordan Kawaguchi was tangled up with Michigan captain Hugh McGing, Mcging taking out UND goalie Adam Scheel allowing for the goal. And just like that, UND was given a second life.

An irate Western Michigan captain and coach argued the call, but it had been overturned and so did the momentum in the game. Just 43 seconds later, UND won the game and the Penrose cup on a Shane Pinto Goal.

The structure of the Ralph’s roof was tested that night as the crowd erupted. A lesser stadium would have had it blown off as the team and coaches celebrated. Across the ice, sticks were broken and words were shared with the officials from the Western Michigan bench showing the true extremes winning and losing gives us.

“I think that’s the best goal I’ve ever scored,” Pinto said. “Just everything about it. Winning it for the seniors. Winning the Penrose Cup. Just the whole moment is something I’ll never forget.”

The celebration is on but this team is not satisfied with just one trophy. Next weekend the team travels to Omaha for their last regular-season series of the year. A win would lead them to be the outright winners of the conference and the number one seed for the upcoming conference tournament.