An Interview with Armacost 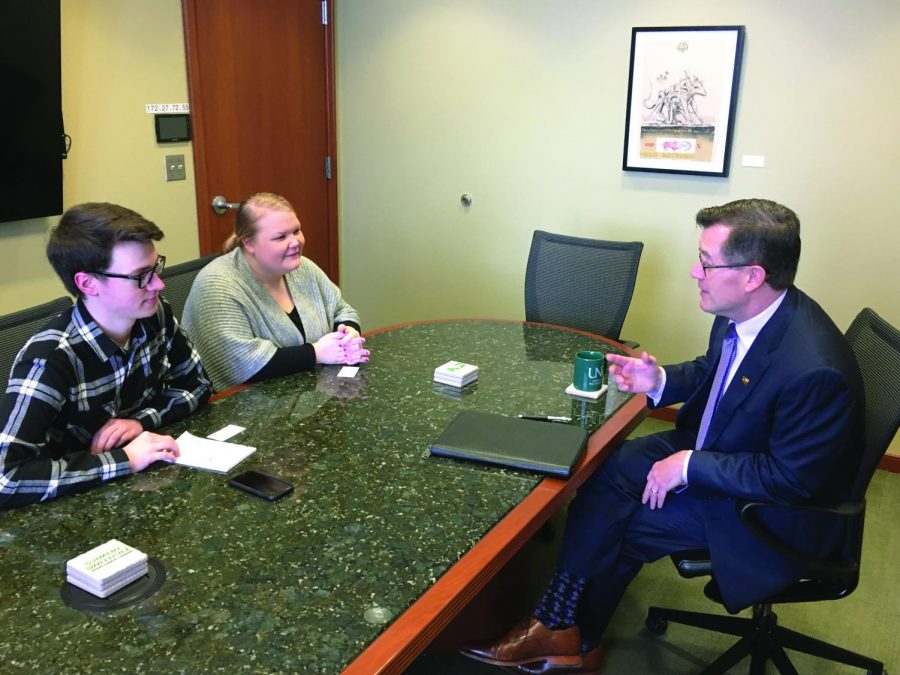 “I’m just a curious person who wants to know what’s going on in the lives of students.”

Incoming president Dr. Andrew Armacost was in Grand Forks and had been meeting with faculty, students and community members during his four-month transition period.

These meetings will be an insight into the issues that the University of North Dakota faces and will help build healthy relationships between President Armacost and the Grand Forks community.

“There are areas of concern whenever you come to a campus. How is a campus going to receive me and what are the key issues that the campus faces. I’m getting great insights into both of those issues through this four-month transition period. So, nervous? Not at all.” President Armacost said.

Last week Wednesday, The Dakota Student had a chance to talk to the incoming president in an exclusive interview to find out expected changes for UND, plans for student relations and community involvement.

“With Grand Forks, I can’t think of a better, more committed community to the success of UND and I think the relationship that I establish as president, not just with the elected and the business leaders, but also with the citizens,” President Armacost said. “As a consequence, I’ll spend quite a bit of time in the community, I’m not going to be a recluse on campus.”

Since former President Kennedy’s dramatic departing, the students of UND have not had relations with the institution’s leaders. Although Interim President Wynne has been working diligently, the students have not had a chance to engage with the interim president. President Armacost wants to focus on building a strong relationship between the school and the students, so he plans on reaching out to students whenever he can.

President Armacost had preconceptions of North Dakota, Grand Forks and UND long before he stepped foot in the state. Mostly from colleagues or close friends, his vision of North Dakota was influenced by positive images. Growing up in Wisconsin prepared him for Midwest tendencies and some of the weather, but North Dakotan attitude is different than most Midwest states.

“I have known many people through my airforce career, whether they’re from Minot, Grand Forks or wherever, they always speak glowingly of the people and the communities. Keep in mind I had this perspective of North Dakotans being hardworking, kind, ethical people and that aligns really nicely with what I grew up with.” President Armacost said.

As far as plans go for the UND campus, President Armacost has some plans for the future. The esteemed aviation program has received more attention than other programs around campus, but President Armacost plans on focusing on other areas as well.

“We have to pay attention to opportunities very carefully and not amplify one area of the campus at the expense of another.” President Armacost said.

President Armacost is anticipated to start on or before June 1, 2020. Interim President Wynne will be continuing his presidential duties until the four-month transition period is over. Thank you, President Wynne!