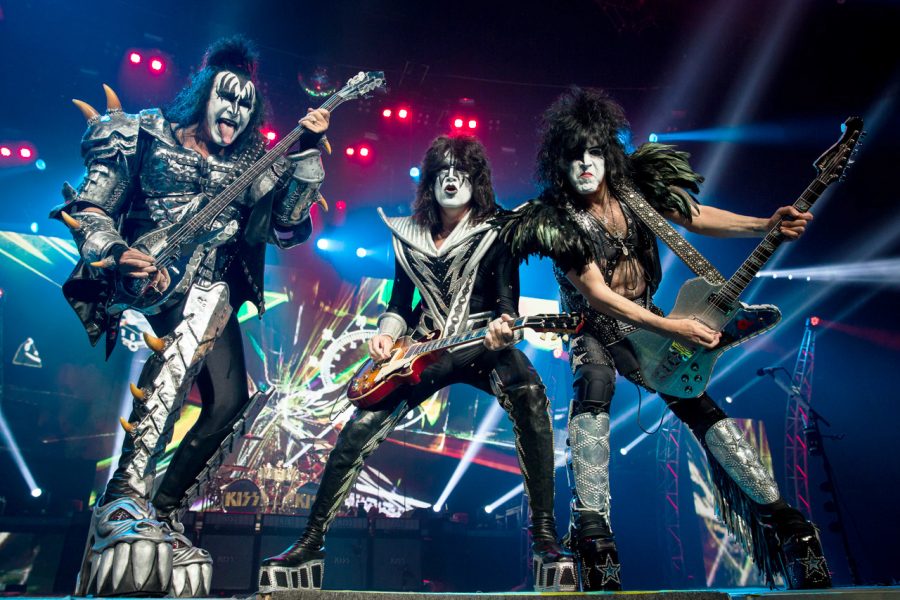 KISS took the stage 43 years ago in Grand Forks and made their way back this Saturday, at the Alerus center.

“I remember playing at the University of North Dakota in 1977…” Paul Stanley said. “I want to find out where all the crazy people are, where all of the loud people are!”

The Alerus Center was filled with fans of all ages that had their faces painted and were ready to rock and listen to some great music. Although KISS may have the reputation of being an older band for older people, there were children and teens there as well.

David Lee Roth, the frontman for Van Halen opened the show. He literally kicked the show into motion as he took the stage. He was dressed in a button down, vest and flare styled pants. He energized the crowd by singing some of their greatest hits. Some of which included Jamie’s Cryin’ and Runnin’ with the Devil.

His performance was mesmerizing as he twirled his microphone stand over with perfect precision. His energy and pep could be felt by everyone in the crowd.

After Roth finished his performance, the crowd was eager for KISS to take the stage. A banner hung over the stage and covered the set so the audience was surprised about what was to come.

KISS started their concert with a bang of fireworks and flames, which heated the stadium. The crowd roared with excitement as they all shared the moment of making history and seeing KISS perform one last time with their final tour, The End of the Road Tour.

The performance was dynamic. From the classic costumes that included platform shoes, sparkly instruments and their famous face paint. Their performance was extremely on brand, meaning that the music was loud but the energy was louder.

It was a classic show and could be compared to that of the performances from 40 years ago.

The stage itself seemed to make the audience feel as though it was multidimensional. There were a lot of moving parts that included rising stages for each of the members. Even with all of the moving pieces, they played each and every song seamlessly without interruption.

KISS pulled out all of the stops for this show. It included great solos from the drummer and guitarist and even a bloody surprise–that’s right, there was blood coming out of the mouth of Gene Simmons at one point.

Their setlist consisted of 21 songs. Some of which were their greatest hits– Detroit Rock City, Black Diamond and Rock and Roll All Nite.

Grand Forks is on the fifth leg of KISS’ eight leg tour, which made stops in Europe, Asia, Latin America, and South Africa. Their final show is set for July 17, 2021 in New York City where the band will complete their last and final performance.

Although it may be the end of the road for KISS, their legacy will live on forever.