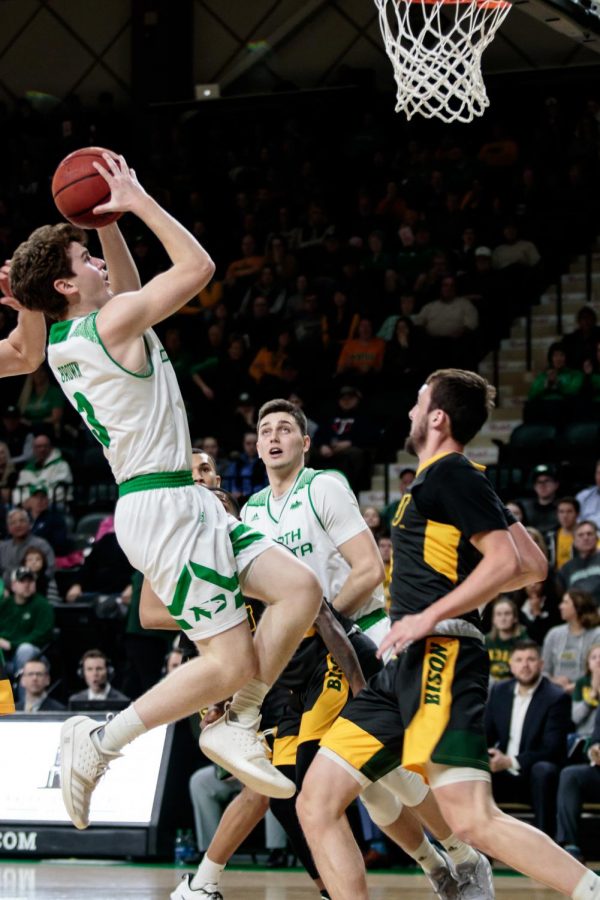 The outside shooting game paced SDSU pass UND 94-83 on Wednesday night at the Betty.  No surprise, because the Jackrabbits shot 9 of 22, while UND went 11 of 28, from the 3-point line. The Summit League is considered to be the one of best in the country when it comes to shooting 3 pointers.  The Jackrabbits shot 64% from the field, overall but shot a strong 72% in the second half to keep them going.

“Our league is a very, very offensive-oriented league,” SDSU first-year coach Eric Henderson said. “When you look at our league statistically and analytically, we’re the top 3-point shooting league in the nation. You have to make sure you’re guarding the arc.”

Three Fighting Hawks scored at least 20 points. Filip Rebraca and Kienan Walter lead UND with 23 points. Rebraca also contributed five rebounds. Walter scored 15 of his 23 points in the first half and also went 7-for- 11 behind the arc. Marlon Stewart was the third Fighting Hawk to score 20 plus points, with 21 points and eight assists. This was Stewart’s 20th straight game in double figures. Overall, UND shot 52% from the field. UND was down five going into the break, 39-44.

UND’s defense struggled on defense letting SDSU’s Douglas Wilson drop 31 points, dish out four assists, and earn six rebounds. Alex Arian made 3 out of 4 behind the arc for the Jackrabbits.

“You can look at the positives from this game,” Walter said. “We shot 53 percent, but we have to understand we need to get better defensively.”

SDSU opened up the second half making 8 out of their first 10 shots, giving them a 14-point lead. It was 64-50 with 12 minutes left to play. But the Hawks didn’t give up, they made six free throws and Walter hit another three to pull them within eight points with five minutes left. But once again, SDSU couldn’t miss and held on to win. The Fighting Hawks have consecutively lost to the Jackrabbits eight in a row.

“On a good night we can be really close to them,” Rebraca said. “So, we’ll just keep working. I feel like we can beat them.”