Oral Roberts Height Too Much for UND 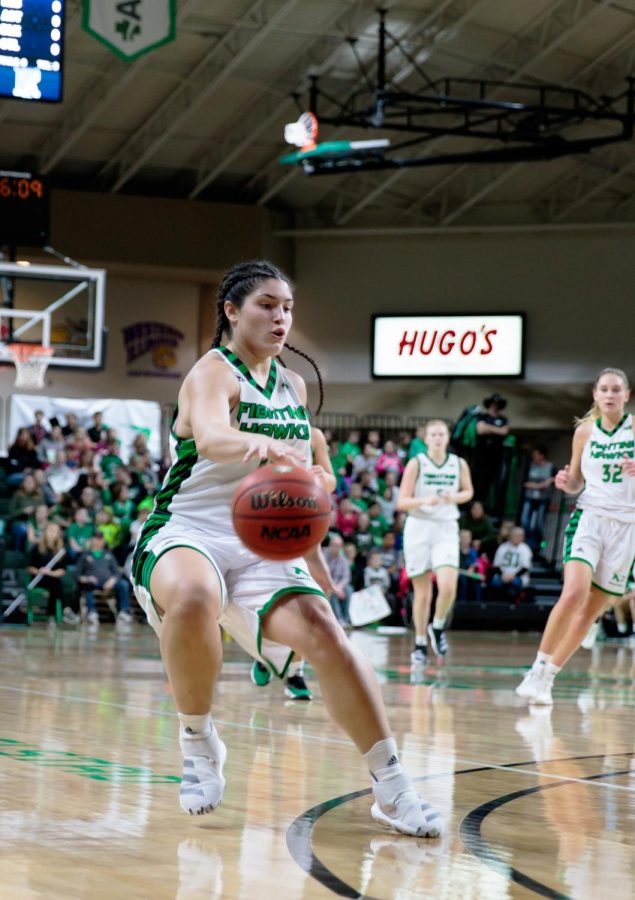 Montserat Brotons, a 6-foot-4-inch center from Spain proved to be too much for the Fighting Hawks, scoring a game and career high 20 points in the paint for Oral Roberts.

Oral Roberts is a post-oriented team.

“That’s just where a majority of our offense is generated,” Oral Roberts Head Coach Misti Cussen said. “That’s more of our focus in every game, not just a North Dakota thing.”

UND’s most experienced post and top scorer Julia Fleecs got into foul trouble early, causing her to play 10 minutes under her average playing time.

“For us, it was our post presence,” Fleecs said. “We worked all week, dominating in there. We did that in the first half. We dropped off in the second half.”

The Fighting Hawks had a great first quarter outscoring the Golden Eagles 20-15 making eight out of 14 from the field.

The Hawks played a fast-paced game. Going into the halftime break UND held a small two-point lead, 33-31.  Jaclyn Jarnot scored eight of her total 14 points in the first half.

The Golden Eagles outscored the Fighting Hawks 27-14 in the third quarter to put them ahead 58-47. Oral Roberts led by as much as 18 points early in the fourth but UND pulled within seven points with 2:35 remaining. Unfortunately, UND could not get the job done, losing 86-72.

“We didn’t do a good enough job of keeping them off the free-throw line in the third quarter,” said Head Coach Travis Brewster. “I thought we did a good job of executing our defense in the post during the first half, sagging enough to pressure on our double teams just enough and we just didn’t do that in the second half. You can’t guard anyone at the free-throw line. We have to make sure we execute for 40 minutes.”

Four Fighting Hawks players were in double digits. UND was led by the Jarnot sisters, Jaclyn scored 14 points while Alaina followed with 13 points and five assists. The freshman from Pequot Lakes, Minn. Olivia Lane earned her first start of the year and third double-double scoring 13 points and 13 rebounds, eight of those rebounds came in the first half. Fleecs was also in double digits with 11 points.

The Fighting Hawks and Golden Eagles are now both 5-5 in the Summit League play. UND is 14-9 overall. The Golden Eagles earned their second road win of the season.

“You have to let this one sting a little,” Brewster said. “(Sunday) is a great opportunity to play a team ranked in the Top 25. You have to earn it. They are not going to give it to you. They don’t make a lot of mistakes.”

The Fighting Hawks next matchup is against Western Illinois away in Macomb, Ill. at 4:30 p.m. on Saturday, February 15.