Hockey Back to Winning Ways Against Colorado

UND has eyes on tournament run after sweep 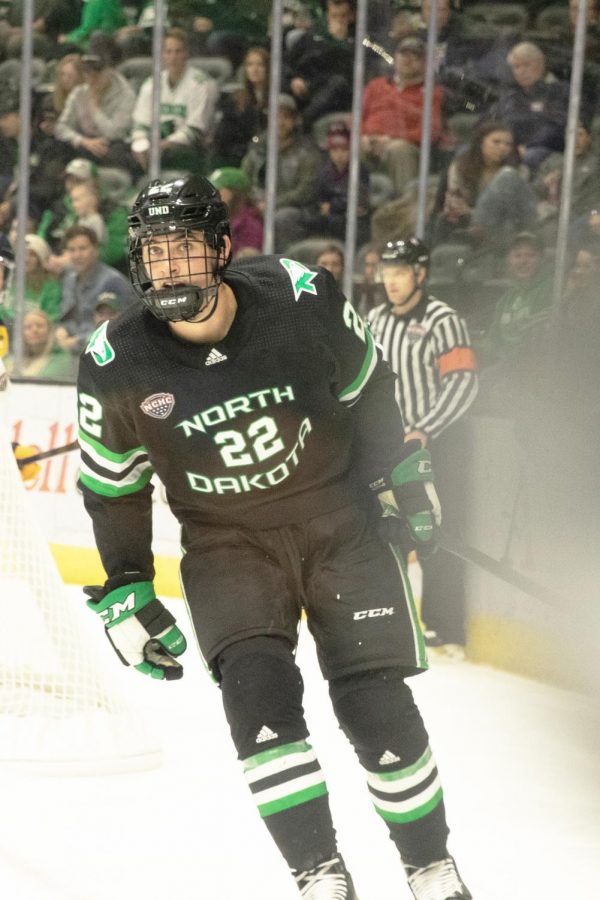 The number two team in the nation returned home this weekend to the Ralph after suffering just their third loss of the season in last weekend’s split series with Minnesota Duluth. This weekends tilt came against the team that is occupying the bottom spot in the conference standings in Colorado College and was a match up that weighed heavily in North Dakota’s favor. In two very different games UND showed how well rounded their squad is and look poised for another tournament run this spring.

Game one of this weekend series against the Tigers of Colorado College diverged into a goaltending battle as only 1 of the 55 shots on the night found the back of the net. The first and only goal of the night did not come until a power play halfway through the third period. Luckily for UND that shot came off the stick of their second-round draft pick of the Ottawa Senators, Shane Pinto.

Pinto scored the game winner but the star of the night for the Hawks was junior goaltender Peter Thome, who came away with 25 saves and his second career shutout. Thome’s number was called in the starting line up for just the third time this season as Adam Scheel has been at the helm for the majority of the first half.

Thome took advantage of this opportunity and made impressive saves all night. None more so than an early second period stop of former UND player and the nation’s second-leading scorer, Westin Michaud, on a breakaway. Colorados Goaltender, Matt Vernon, son of former NHL pro Mike Vernon, came away with 29 saves on the night and was one bouncing puck away from matching Thome.

“It’s pretty special when, in college, you get to work with an NHL-level goalie coach. It’s not just once or twice a week. Every day he’s at the rink. He spends all day here,” Thome said. “He’s always available to chat if I have questions or anything. I can’t say enough good things about him. He’s always pushing me, never letting me be satisfied.”

On Saturday night it was the same result but a completely different story as UND completed the sweep with an eight-goal barrage as the nation’s number one scoring offense let loose. In a display of their complete offensive attack, the eight goals scored were netted by seven different players.

Jordan Kawaguchi, the junior forward from Abbotsford, BC, claimed his spot at second in the country in points with a two-goal, one assist performance. His line, along with Collin Adams and Grant Mismash, combined for four goals and seven assists on the night. Coach Brad Berry was happy to see this line progress.

“The years have ups and downs,” Berry said. “I’m not saying they were down. They were clicking early and it wasn’t coming easy for them over the last couple of weekends.”

Mark Senden, Cole Smith, and Gavin Hain. The line denied the top line of Colorado a point this weekend and forced them to finish with a combined -11 on the weekend. This line included former UND player and number two scorer in the country Chris Wilkie.

Thome got the nod in goal after his performance in Friday night’s game and turned away 14 of the 15 shots he faced. Thome has yet to lose a game in net this season.

With a loss this weekend, Cornell is likely to drop leading to UND retaking the top spot in the national rankings. This will be the perfect lead up to the weekend as the number four team in the country, University of Denver will travel to Grand Forks for a showdown at the top of the conference. For a series with potential tournament implications between two eight-time national champions, it will surely be in the national eye.