‘The Road to Little Rock’ 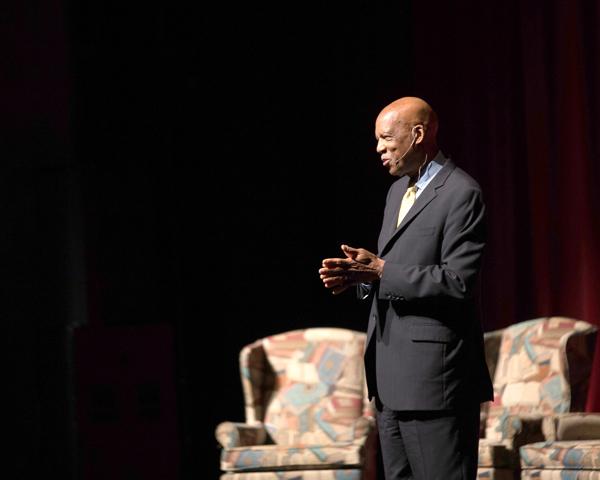 Little Rock Nine member Terrence Roberts visits UND on Monday night for a screening of a documentary on the nine children’s experiences. Photo by Keisuke Yoshimura.

“The Road to Little Rock,” which was presented Monday night at the Chester Fritz Auditorium, is a short documentary about Judge Ronald Davies, a UND alumnus and one of the first judges to enforce the 1954 U.S. Supreme
Court ruling that segregation was unconstitutional.

The case followed the Little Rock Nine, the group of African American children that volunteered to be a part of the integration process in Little Rock, Ark.

The documentary shows how even though the Supreme Court made its decision in 1954, no plans were made for desegregation until 1957. Even then, it took a federal judge, the National Guard and the President of the United States ensure that integration was implemented.

The documentary was introduced Monday by Tom Davies, the son of Ronald Davies. Also speaking that night was Terrence Roberts, one of the Little Rock Nine.

The documentary contains interviews with the Little Rock Nine, as they discuss the challenges they faced.

Some moments shown in the film included the very first day of school for these children, when the governor ordered the National Guard to block the students from entering the school.

In the discussion afterwards, Roberts talked about the value this film and the story it tells.

During the discussion, Roberts told the little known story of the 10th member of the Little Rock Nine, Jane Hill. According to Roberts, Jane Hill accompanied the other nine on that first day when they encountered the National
Guard at school. But, unlike the others, she did not return the next day, because her father had been threatened with losing his job if he did not transfer his daughter.

At the discussion, students learned that Jane Hill was transferred. Nevertheless, her father ended up losing his job anyway.

Despite the actions of the segregationists, Roberts said that the worst of them was the indoctrination of young children into racist ideologies, or — as he put it — “baptizing them in the waters of racism.”

Connie Nelson, who wrote the grant for the funding of “The Road to Little Rock,” was very excited about the project.

“As a mom, if my kid had to go through what those kids went through, I don’t know what I’d do,” Nelson said.

Another great thing about the project, according to Nelson, was having “a living historical figure (Roberts) to work with and talk to.”

Roberts believes that the value of the film to students depends entirely on the type of student that watches it.

Roberts also said historical knowledge could play a part in what one can take from the movie saying the film “will be step one in a 999 step process of learning.”

Michael Rauser is a staff writer for The Dakota Student. He can be reached at [email protected]