UND headed to playoffs for 2nd time in history 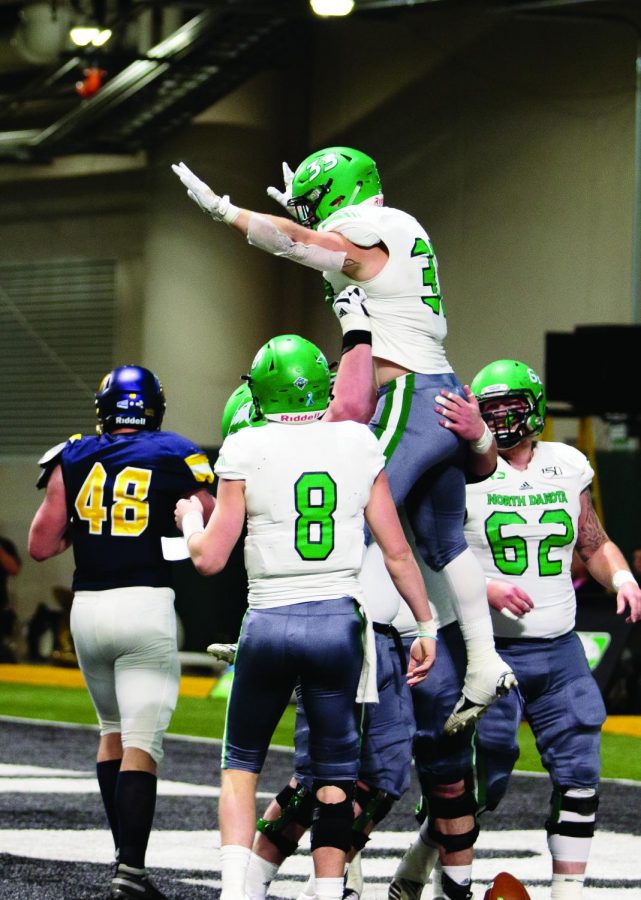 With a playoff berth on the line,  UND hosted the Southern Utah Thunderbirds in a game where they not only had to win, but a win in a fashion that would attract the attention of the FCS playoff committee. With the season on the line the Hawks showed up by putting the game out of reach with an outstanding second half, winning 36-18 and completed their perfect home record of 6-0.

In true North Dakota football fashion the win did not come without some drama as the Thunderbirds had some fans nervous as they took a 15-7 lead halfway through the second quarter.  The Hawks were not deterred by this and played like a team that had their backs against the wall all season long. UND was able to cut the lead to one with a Travis Toivonen 30 yard pass from Nate Ketteringham and five minutes later take the lead with a 43 yard Brady Leach field goal.

After seizing the momentum before half time, the Hawks rolled into the second half and never looked back. UND outscored Southern Utah 19-3 in the second half led by true freshman running back Luke Skokna who scored two rushing touchdowns and finished with 11 carries for 114 yards, including a 34 yard touchdown run last in the fourth quarter that sealed the game with five minutes left.

In the passing game senior standout Noah Wanzek completed his third straight 100 yard receiving game on six receptions but had to leave the game in the third quarter with an injury. Wanzek would later return to the sideline in a sling in what could be a crucial injury for the Hawks going forward.

With their business taken care of, all UND could do was wait for the FCS playoff selection show on Sunday and hope that they had done enough to be one of the 14 non-conference winners to be given a shot at the post season. They didn’t have too long to learn their fate as they were the second team selected for the opening round of the playoffs.

For just the second time in their history UND will make an appearance in the playoffs and will open up with Southland Conference champion Nicholls State. 8-4 Nicholls and UND shared one common opponent this season in Sam Houston State where UND pulled out a 27-23 win as Nicholls lost 17-0 against the Bearcats.

“We’ve got to work hard to learn what we can about where we’re going and most importantly about Nicholls,” UND coach Bubba Schweigert said. “I followed their [Southern Louisiana’s] game the other night, and it sure seems they’re very explosive. We have a lot of work to do.”

The Nicholls State Colonels are lead by their dual threat quarterback Chase Fourcade who has had 15 touchdowns through the air and 11 on the ground this season.  Along with a defensive plan to stop the Nicholls fast pace offense the goal for UND must be to protect the football. Turnover has been a problem for the Hawks this season and playoff games can not be won if you put the ball on the ground.

When looking at the playoff bracket, it’s hard not looking passed the first round as the winner of this matchup will play a certain school located 73 miles to the south. An ever daunting trip to the FargoDome to face the winner of  seven of the last eight national championships awaits.

You can watch this playoff matchup and support UND at 3 pm cst on ESPN 3.