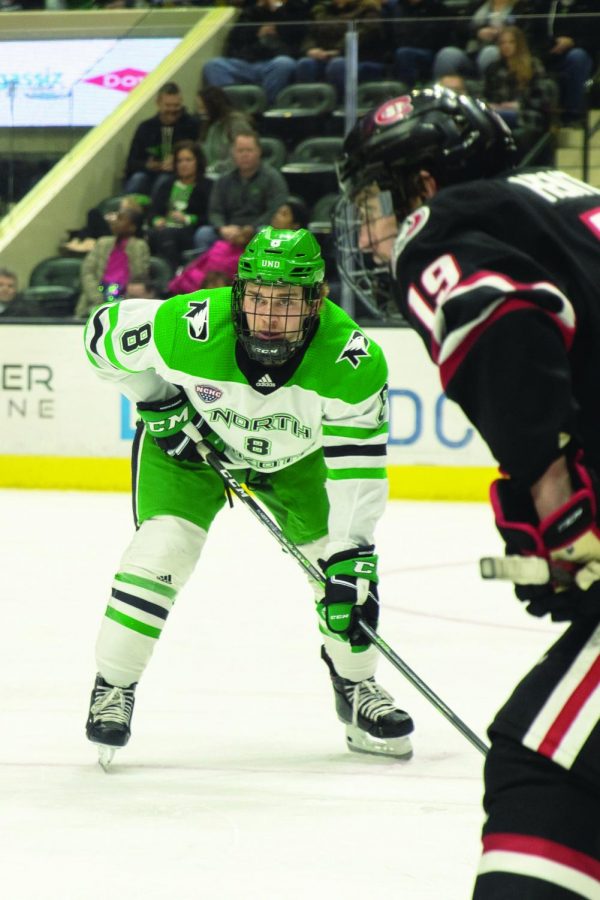 UND came into the weekend at #5 in the nation according to the official NCAA rankings. Without a loss at home yet this season at home, the weekend looked promising for the Fighting Hawks.

Friday’s game was very close in both shots on net and goals for the first two periods as both teams seemed to stay within a couple shots of each other throughout the duration. UND Freshman phenom Shane Pinto started off the scoring in the first period as Michaud fed him from behind the net for a one-timer (8:43). The second goal did not come until the second period as Pinto scored again on the powerplay on a nice feed from Kawaguchi in the slot. SCSU’s Jaycox scored a couple minutes later (7:16) from a scramble out front and a tap in goal to make it 2-1. Not long after, Kawaguchi again, with a nice feed to Adams out in front for a one-timer that snuck five-hole to make it 3-1 at (10:51). The next goal came on the powerplay (12:33) from SCSU’s Nick Poehling as he snuck a puck five hole to make it 3-2. As things wound down in the third period, SCSU pulled their goalie in an attempt to tie things up. The man advantage was no challenge for UND as Cole Smith quickly got the puck out of the zone and shot one in from the red line to seal the deal.

Shots ended 34-18 in UND’s favor as they outshot St. Cloud in the third period 15-4. Pinto was the first star of the game, as he showed great confidence and skill notching two goals, five shots on net, and a +1 rating on the night.

After a big win on Friday, UND wasn’t looking to let up. A sellout crowd (11,747) was ready for action on the second night of the series.

Things started off in SCSU’s favor as Ahcan rifled a point-blank shot that snuck past a confused Scheel at (13:20). The second goal didn’t come until halfway through the second period, as Kawaguchi fed JBD who made it look easy for a snipe from the point to tie things up. These two teams needed extra time and needed an OT hero. Kawaguchi was up for the challenge as he tipped in a shot from Kiersted who carried the puck down the half wall, made a quick cut to the middle, and found Kawaguchi’s stick for the game winner (3:41). Kawaguchi earned first star honors as he tallied both an assist and a goal, helping lift his team to the win. Shots ended 18-12 UND.

UND has a perfect 9-0-0 record in the Ralph to start the season and will now start their away stretch leading up to Christmas. UND improves to 10-1-2 overall and 5-0-1 in conference play. UND picked up all six points this weekend, another big weekend for the program, making it the second weekend in a row with an NCHC sweep and the majority or all of the conference points up for grabs.

Brad Berry earned his 100th win as head coach after Saturday’s win, a huge feat for the coach whose first season resulted in a national championship in 2016. The future looks bright for the coaching staff and its players.

“He didn’t want it,” Jordan Kawaguchi, UND forward said. “He put it in the middle of the room and said it’s not his 100th win, it’s our 100th win. That’s kind of a staple of our program. It’s about us, rather than one person. It’s great having a guy leading us like that. We’re pretty lucky.”

UND will face the Gophers over Thanksgiving weekend in Minneapolis.