Behind the scenes of Sweeney Todd: The Demon Barber of Fleet Street 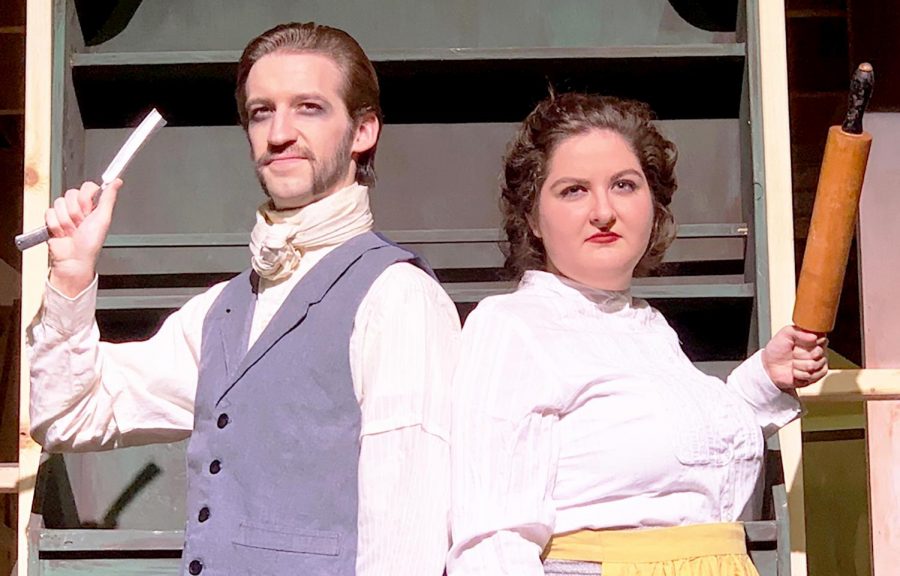 “There was a barber and his wife, and she was beautiful. She was his reason and his life. There was another man who saw that she was beautiful, a pious vulture of the law, who with a gesture of his claw removed the barber from his plate. Then there was nothing but to wait and she would fall, so soft, so young, so lost, and so beautiful.”

Do you know where this quote is coming from? You may recognize these words from the movie Sweeney Todd: The Demon Barber of Fleet Street, where famous American actor Johnny Depp was playing the character of Sweeney Todd.

Last Saturday, Nov. 23,  was the last day when the UND Burtness Theatre presented the musical production of Sweeney Todd: The Demon Barber of Fleet Street.

The audience from all generations came to see the musical with an excitement in their eyes. Many people from the older generations were excited to see the show that they have been known for a long time. Those from the younger generation were curious to watch the production for the first time.

For those of you who are not familiar with Sweeney Todd: The Demon Barber of Fleet Street, it is an infamous tale of Sweeney Todd, an unjustly exiled barber who one day returns to nineteenth century London, seeking vengeance against the lecherous judge who framed him and ravaged his young wife. When Todd is seeking revenge, he finds Mrs. Lovett, a resourceful proprietress of a failing pie shop, above which, he opens a new barber practice. Mrs. Lovett’s luck sharply shifts when Todd’s thirst for blood inspires the integration of an ingredient into her meat pies that has the people of London lining up… “and the carnage has only just begun!” according to UND website.

Overall, there were more than 50 people involved in this show, including scenic and lighting designer, costume designer, sound designer, technical director, and other production staff members.

The actors have been practicing their parts before the fall semester even started. They were practicing solo during the summer break, and they had memorized all the music lyrics by the time when the actual rehearsals started on campus.

“It is a slippery slope that everyone can fall into when preparing for the role when people watching videos and trying to get an idea of how to play their characters before studying their roles. It is important to learn everything about your character, and do lots of readings before letting yourself to watch other people’s work. I was trying to pick some ideas that I thought would be best for the role,” Sabol said. “I spent a lot of time studying Sweeney Todd character. Todd is a very complicated character, and I wanted to make sure that I learn how to present him in front of the audience.”

Katie Germain is a sophomore at UND musical theater performance major who played Mrs. Lovett. She has been involved in theater since 8th grade. Germain was really surprised to realize that she would play Mrs. Lovett.

“I still cannot believe that I was playing Mrs. Lovett. When I saw the cast list I was so surprised. I definitely cried, and I am still in shock. I have never been a lead role before, so it felt different. It made me so happy. I am really grateful for the opportunity to play Mrs. Lovett. It’s been such a cool experience,” Germain said. “Developing Lovett was very interesting and difficult at the same time. Learning the music helped me to learn more about my character. I had many questions for my character, and I was trying to find the answers.”

The director of this production was guest artist Egla Birmingham Hassan, a freelance director and retired professor of theater from Western Illinois University. She came all the way from Texas to direct this musical production at the UND Burtness Theatre. She helped many actors to achieve their goals and develop their acting skills.

Robert Cooper is a sophomore at UND musical theater program who played Anthony. Cooper shared his experience of being in the musical production. His first experience with musicals started in college. Overall, he has been doing theater for five years since then. Cooper enjoyed working on Sweeney Todd production.

“It’s been a journey, and I had so much fun during the show. It was difficult to get a sense of Anthony and bring him into life. He is the one pecan of hope in this show, and I wanted to make sure that I show off my character really well. I did not want to replicate other people but rather make it feel more authentic,” Cooper said.

Another major part of the show was the art of an accent. Most actors have to learn different accents either British, Cockney, or Italian, and surprisingly they were very comfortable doing the accent.

“The script was already written with the specific words that helped us to speak with other accent. I’ve done British accent before. It was not so bad because it was natural after a few practices. I am sure many other people felt the same way,” Germain said.

Sometimes, it can be a big pressure to be in the musical production. Many actors got sick during the show, but they did their best to recover and put on their best performance. Many of them find their new friends during the preparation for the show, and now they feel like a big family where everyone supports each other.

“I enjoyed working with so many talented people. It is fun to act with them on stage and have that positive vibe between each other. We all have great emotional connection with each other. It’s been an amazing journey so far,” Sabol said.

The actors did a great job placing themselves in their characters’ shoes. On each night of the show there were close to 200 people in the audience. Everybody in the audience was living through the show with these characters. Each part of the show kept the audience’s attention at the highest level. Everyone stayed intrigued during the performance, including myself. I could easily feel the atmosphere of the nineteenth century by looking at the perfectly made stage set and actors’ costumes.  By the end of the show, the audience’s breath was taken away.

Joslin Sterling is one of the guests of the show shared her experience watching the show.

“I loved this show. All actors did such an amazing work. Surprisingly, I never watched the actual movie, but after this show I am intrigued to finally watch the movie,” Sterling said.

Titus Kautz was music director and Chelsea Chimilar was choreographer for this show. They did an amazing job guiding actors and helping them find their perfect voices and learn dance moves.

Amy Driscoll is UND Theater Alumni who was a part of the chorus in a show shared her experience.

“One of the hardest things was to learn all of the complicated music. We tried really hard to follow the rhythm and stay in tune while there were a few different melodies, lyrics, and tempos. Our music director was so welcoming and warm to us, so it helped us to stay focused and continue sharpening our skills,” Driscoll said.

Veronica Folkedahl is a senior at UND musical theater performance major who played the role of beggar women Lucy. She agreed that music was the hardest and the most challenging parts in the show.

“Music was the most difficult and a little excited, because it was difficult to rehearse the music for this show than any other shows I have been involved in. It is a very rewarding experience though, when you work hard enough it gets paid off,” Folkedahl said.

Everyone seems to be satisfied with the outcome of this production. The UND Burtness Theater did an amazing job again. Well done. Bravo!

If you are interested to watch shows at Burtness theatre, you are welcome to come to the next production Pumpboys and Dinettes.

Burtness Theatre is located on Centennial Drive, in the central campus, just across the street from the campus quad.