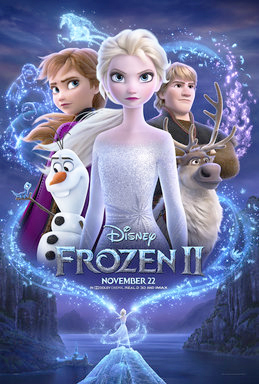 On Nov. 22, Americans of all age ranges packed the theatres to embark on the newly released movie, ‘Frozen II.’ It was so popular that the second day it was out, tickets at River Cinema in Grand Forks were sold out for the 12 o’clock show! So, was it really that good?

After breaking it down and analyzing the characters, animation, special effects and other elements of the movie, it is safe to say that Frozen II was, indeed, really that good!

Looking at it as a whole, I would rate this movie a five out of five stars and here is why. I believe that anyone could go to this movie, regardless if they had seen the first one or not, and they would still be able to follow the storyline and enjoy it. If you had seen Frozen I, great, that probably just enhanced your understanding and enjoyment of it.

Secondly, this movie was truly for all ages. Though it is rated PG and was probably geared more towards children’s entertainment, it most definitely did not lack humor for adults as well. Therefore, all ages would be able to find some level of entertainment.

Another aspect of this movie that went well was the storyline and their delivery in telling that story. The movie was fast paced and did not drag on. It had intense scenes that were thrilling and suspenseful, which kept me engaged.

Along with the main storyline being presented in the foreground, there was also a love story intertwined that was going on throughout the movie and that was completely revealed in the last scene, which made for a fantastic ending.

Like stated previously, the humor and punch lines were not lacking in this movie. My personal favorite, Olaf, was hilarious all throughout the whole movie. The directors and script writers did a nice job of being creative with the snowman and they truly broke all “biologic rules,” because he is a snowman, and they were allowed to control his abilities.

Regarding the other characters, I thought they all were portrayed great as well and the animation and detail that was put into their costumes and faces made it extremely realistic.

A couple other aspects from this movie that really stuck with me was the bond that Elsa and Anna have and how much their relationship was strengthened and just the fact that two women were the heroes of the whole movie, which is rare these days.

Elsa and Anna are portrayed as two quite opposite in nature humans that happen to be sisters. The common denominator between both of them however, is their stubbornness and strength. The filmmakers did a nice job establishing their relationship in the very beginning and followed through until the end of showing the outcome of strong sisters who work together will
only increase their love for one another.

I also really liked how this movie portrayed girl power. These two girls saved their whole town after losing both of their parents and after enduring many trials together, their strength and power pulled through for a satisfying ending.