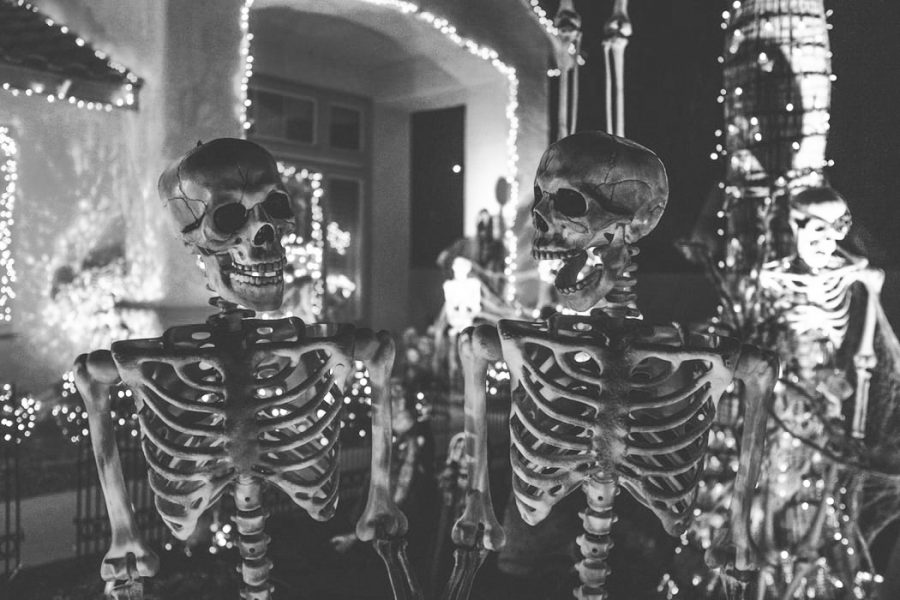 The minute October arrives, Halloween vibes fill the autumn air. October becomes the month of eeriness and fear. Skeletons hang from people’s windows and doors, their bones clattering together in the wind during the late hours of the night. Incandescent outdoor lights are replaced by orange, purple and black bulbs. The empty eyes of the jack o’ lanterns lining front porches watch you as you walk past them. Leaves dance down the streets. Giddy squeals echo in the air as kids chase each other outside, enjoying this month of spookiness.

Growing up as a kid, Halloween meant going to a pumpkin patch to pick out the most perfect pumpkin to carve. It consisted of me spending an unnecessary amount of time searching through design templates online that would become the face of my pumpkin. I would then excitedly run back to the newspaper-covered kitchen table to scoop out the “pumpkin brains,” a process that always took longer than needed because I spent most of the time running my fingers through the slimy pumpkin insides rather than taking them out. Once I finished all of the easy work, the task of carving the pumpkin would be left up to my dad because I wanted the pumpkin to be the best in the neighborhood, and I didn’t think my little kid hands could do a good enough job.

Halloween night as a kid in the Midwest meant dressing up in costumes that often were too thin to wear alone, pretending to be someone or something else for that night. It meant going out with layers of clothing on under my costume, despite telling my mom that I didn’t want to look like a marshmallow. The spooky evening consisted of running around the neighborhood from house to house, only calling it a night when the orange jack o’ lantern bucket was filled to the rim. Halloween meant dumping said candy on the kitchen table and sorting it into three piles: one large one for my sister, another large one for me, and a third, much smaller pile of unwanted candy for our parents.

As I got older, the thrill of Halloween didn’t fade away. Halloween meant getting the entire friend group to go to a haunted house because it seemed like a great idea at the time. I always ended up running through the entire house with my eyes closed out of fright, clenching the hands of my closest friends. In our eyes, the worst-case scenario was that someone would get lost somewhere amongst the groaning zombies, children-eating witches, and blood-sucking vampires. In other words, we were always convinced that we weren’t going to make it out alive. The trip to the haunted house always resulted in hearts pounding from adrenaline, voices lost from screaming, and a lot of questioning as to why someone thought the haunted house would be a “fun” idea.

Halloween also meant trying to conquer a corn maze that was next to impossible to navigate through. It meant running through a muddy field in the pitch black, heading left and then quickly taking a right turn, and then heading left again, hoping the path I took would lead out.

No matter how old I get, Halloween will always hold a special place in my heart. It now means cozying up around a bonfire with all of my friends, sipping hot apple cider that helps warm the cool autumn night while telling horror stories. It means that I have exactly 31 days in the month of October to embrace this spooky season known as Halloween.