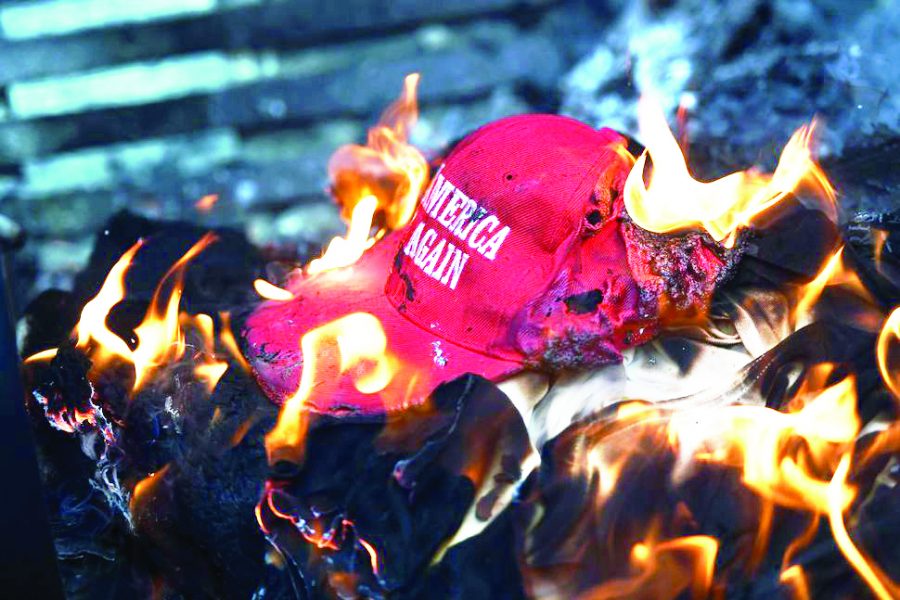 On Oct. 10, President Trump held a rally in Minneapolis, Minn., in an effort to “turn the state red.” In his opening statement, he declares, “We are going to win this state.” Trump lost Minnesota by a narrow margin in 2016, but he hopes this election will be different. His supporters flocked to Minneapolis and showed their pride with record-high numbers for the rally, more than 20,000 were in attendance for his speech, while more were waiting outside.

For most of President Trump’s speech he mocked his opponents, highlighting that if his opponent won in 2016, China would have been stronger than the U.S. through economical power. Trump emphasized his stance on “putting America first” when he called out Democratic leaders in Washington D.C. and their failed promises.

“Our bold pursuit of this pro-American agenda has enraged, and you know what’s happened, it’s enraged the failed ruling class in Washington. Not easy to get them out, but we’re doing it slowly but surely.” President Trump said. “These corrupt politicians and the radical leftists got rich bleeding America dry and they knew that my election would finally end their pillaging and looting of our country.”

President Trump went on to insult Representative Ilhan Omar, a Rep. from Minnesota and the district he was speaking in, for being an “American hating socialist.” Ilhan Omar made headlines earlier this year for her anti-Semitic tweets about Israel and her quote, “Some people did something,” referring to 9/11. Trump also spoke about the Somali refugees in Minnesota, citing that communities should have a say in whether they want to accept refugees or not. Minneapolis Mayor Jacob Frey responded to Trump by saying, “Immigrants and refugees are welcome in Minneapolis.”

President Trump shifted his focus on one of his rival presidential candidates, Joe Biden, and his involvement within the Obama Administration. Part of Trump’s speech was directed to Joe Biden’s son, Hunter.

After the rally, the streets of Minneapolis awoke to escalating tensions. Trump supporters and protestors clashed without immediate violence taking place. After most of the Trump supporters dispersed for the night, things took a different turn. In multiple videos, you can see protestors burning Trump merchandise. This is an illegal offense since the protestors do not have a permit to do so. There were multiple instances of Trump supporters being physically assaulted by mobs of protestors. Only one arrest has been made relating to the rally.

Minneapolis Police Chief Medaria Arradondo released a statement on Friday relating to the protestors at the rally.

“While the vast majority of people that gathered were peaceful and respectful, officers did engage with some individuals and groups demonstrating aggressive or illegal behavior to address issues related to life safety and property damage. Officers further engaged when assaulted during their response. Objects containing liquid believed to be urine were hurled at some of my officers along with bottles and rocks. Police horses were also assaulted by protesters striking them with sticks.” Medaria Arrandondo, Minneapolis Police Chief said.

Center of the American Experiment has compiled multiple videos showing some of the clashes between protestors, Trump supporters and the police.

It can be reached at https://www.americanexperiment.org/2019/10/trump-rally-protesters-turn-violent/