Filling the Recital Hall with Talent 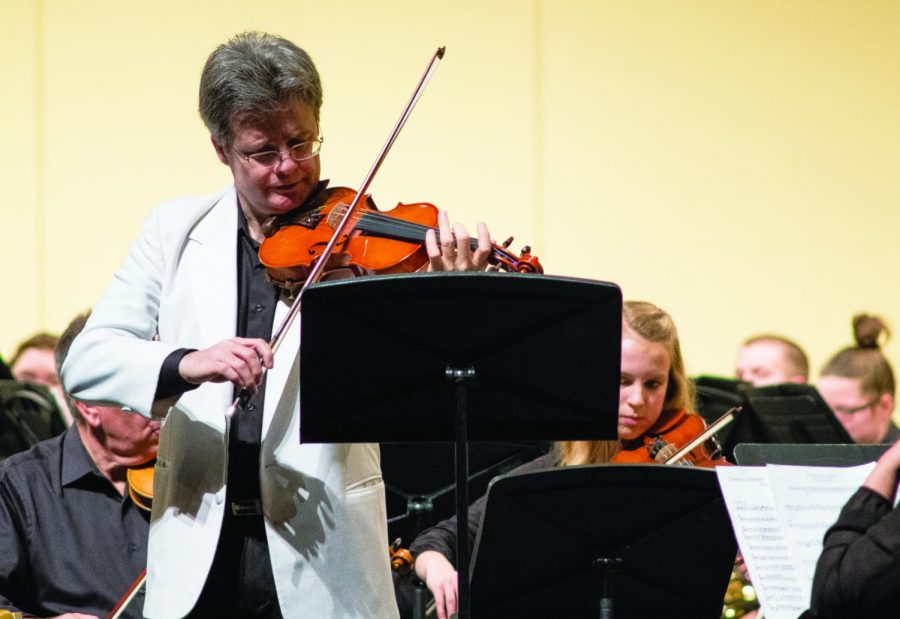 The lights in the Josephine Campbell Recital Hall begin to dim, matching the fall’s evening darkness on October 9. The only light left is shining down on the UND Chamber Orchestra. All dressed in black, the orchestra gives off strong feelings of unity. This unity among the group becomes evident the moment they open with Mozart.

Each musician moves in their own way to the many notes filling the air of the concert hall, yet they all manage to move together, to the same rhythm, the same heartbeat. There is no drum to create a beat, but the thrum of the strings and the movement of the musicians take on this role instead. The night becomes an evening filled with harmony, a night in which both the orchestra and the audience become entranced by the music and are taken away on a journey.

The UND Chamber Orchestra is one of great diversity and beauty. It is composed of members not only from the Dakotas and Minnesota, but also from Montana, Colorado, Nevada, Oregon, Russia, Argentina, Serbia, China, Australia and Taiwan.

Dr. Alejandro Drago, who has been the director of it for 11 years, spoke on the talent of the orchestra.

“The good thing about being the director of an orchestra is that you get to do much more than just teach or just conduct. You build a program. You recruit people. You identify talent. You open possibilities for them. You nourish that talent. And you see it thrive, and then impact other students,” Drago said.

This Chamber Orchestra was brought together at the end of August, but they performed like they had been together for a long time.

“It’s a mixed group…but I am very satisfied because this seems to be a particularly dynamic team,” Drago said.

A team. A united group. That is what the UND Chamber Orchestra is. It’s a group of students who want to do the same thing: do what they love and share that love with other people.

Mariah Vetter, a UND student, has been a part of the team for three years now.

And with that strong desire, she found the UND Chamber Orchestra.

String bass player Michael Farrick has nothing but positive things to say about the dynamic between all of the musicians.

“I think it’s all pretty tight nit, especially amongst the music majors; I mean we’re always around each other during the day. Then, even the people who aren’t music majors, we see them three days a week for an hour and a half, so we all kind of share the same opinions about the music we play,” Farrick said.

Zadok Pearlstein, a viola player, has been heavily impacted by the orchestra.

“It’s definitely made me grow. It’s made me grow as a student to interact with people, not just when playing, but also in other aspects of life,” Pearlstein said.

The beauty of UND’s Chamber Orchestra is not only found in the music being played, but it is also found in the musicians themselves. Their love for music is so evident, and they are able to reflect that fondness onto the audience. It is breathtaking to watch as the diverse group of musicians become one with their music, and their instruments simply become extensions to their bodies. All of them express their own emotions and feelings throughout the pieces, from tranquility to sorrow to fulfilment, yet the audience can feel all of these being expressed.

That is the beauty behind the UND Chamber Orchestra: the music, the director, the musicians and the audience can all come together on one night and bond over unspoken emotions.

Within the recital hall, it is not just a concert being performed, but rather, it becomes an experience. Each piece of music tells its own story, and everyone present in the building connects to it and one another, each in their own way, whether that be because of heartbreak, love, loss, passion, or pain.