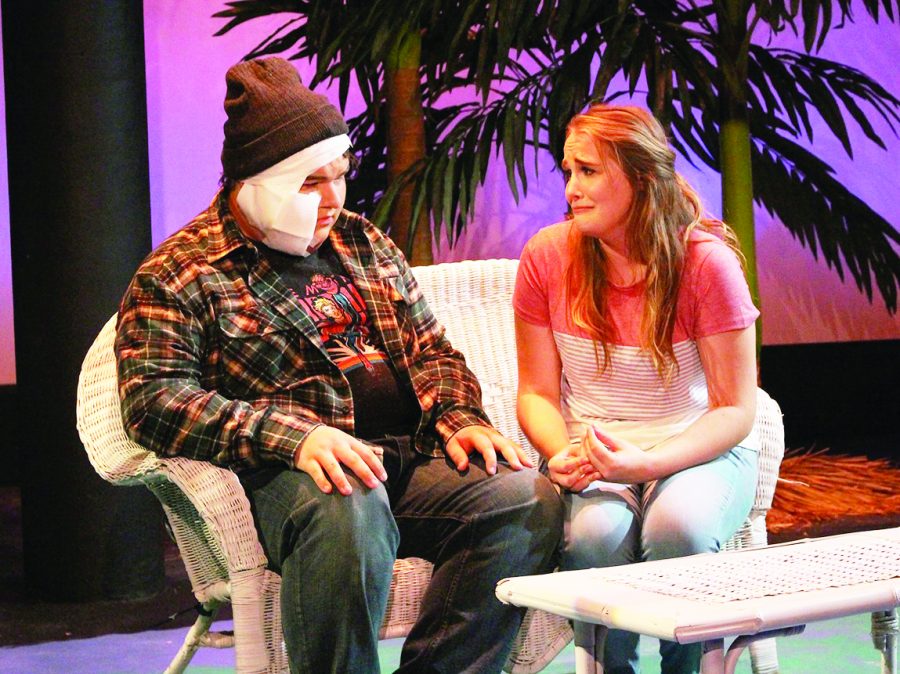 It can be hard to find spare time to do something enjoyable on the side of a school work. With the rainy weather, it has been hard to enjoy the fall season. There is a quick solution to brighten these cold rainy days: the theater.

The Burtness Theatre is a 55 year old theater managed by UND Theatre Arts department. The Burtness Theatre is a major performance facility at UND which includes 365-seat proscenium theatre, a flexible seating laboratory theatre as well as scenic and costume shops. Major equipment purchases in lighting and sound and other remodeling projects help maintain this theatre as one of the best in the region, according to the UND website.

There are multiple shows students can watch at Burtness theatre throughout the school year.

Last week students of UND got a chance to enjoy watching the production of the Grace as the opener of 2019-2020 theater season at UND Burtness theatre.

Grace is a tragic story with some elements of a comedy that explores human assumptions about how God, goodness, faith and causality operate in the cosmic machinery. A married couple Steve and Sara, played by Cole Bakke and Gina Uhlir, have relocated to Sunrise, Florida to pursue an unbelievably wonderful business deal, but as the deal slowly unravels and Steve finds himself afflicted with an itch that just won’t stop. Sara finds herself increasingly drawn to their next-door neighbor, Sam, played by Kyle Mason, a badly-scarred victim of a recent car accident who wants nothing to do with her or her Bible-quoting husband. In the end, with a little help from an old German exterminator, played by Tanner Sabol, who’s still angry about the Allied bombing of Hamburg in World War II, all three characters are confronted by a world that’s both better and worse than any religion can justify.

This play had a different attitude towards time and space. The first scene was played with the actions and dialogues going in reverse. The actors spoke in sentences which were making sense, but the order in which they said them was backwards. By the end of the show, the puzzle of the time and events unraveled on its own, and the audience came to an understanding about the reason behind the scene order.

While this show had the tragic ending, there were many funny and joyful moments throughout the show. The actors did a great job bringing the audience into the atmosphere of the show. It felt as if the audience was a part of it. Four characters used the stage as a place where the rules of physics and nature of belief collide.

Cole Bakke is a UND theatre actor and a student at the UND department of theatre arts. He played the role of Steve and has been playing different characters at UND Burtness Theatre for as long as four years.

“My favorite part of the show is to perform in the small space and be able to feel a connection with the audience. It heightens our senses so much when people are so close to the stage,” Bakke said.

The play was simply and gracefully staged and designed. The lighting was also well organized.The presence of the palm trees on the stage made the audience feel closer to sunny Florida. Because the stage is very close to an audience, there was an intimate feel of connection to the show story and its characters.

It took less than a month for actors to prepare for the show. During that time, the actors worked hard rehearsing every single night to create the best show for the audience.

Gina Uhlir is the UND theatre actress who played the role of Sara has been involved in a variety of shows at UND Burtness Theatre since she began to study theatre major at UND. Overall, Uhlir has been in theater plays for about 16 years.

“It is not easy to manage time between school work and play rehearsals. Most of us have done multiple shows so it is something you just getting used to. There is a rehearsal every single night, and you just build that routine into your life, and then, it’s just become something you do,” Uhlir said.

The cast for this show was rather small but this adds another layer to the performance.

Tanner Sabol is the UND theater actor who played the role of an old German exterminator Karl. He has been involved in multiple performances at Burtness Theatre since his first year at UND.

“My favorite part of the show was diving into the philosophy of this show, how all the characters choose to deal with their own issues,” Sabol said.

Creating a character is not an easy task. It takes emotional connection, hard work, and sometimes even some talent in speaking with different accents.

There are many people who help actors to put their costumes and make-up on. There are approximately 20-50 people who helps create the show. All stage managers, stage designers, and lighting designers, everybody who work backstage are a big part of the show who need to get a credit for it too.

“Our make-up is a big part of the show and who we are as the characters. When I go home and wash off all my make-up, I allow myself to let the show be washed out too. I get to sit back and enjoy me again,” Bakke said.

Everyone works together to not only produce their best work, but to ensure the show is the best it can be.

“All of us are working hard on the show, and all the people who help with a show deserve to be recognized,” Sabol said.

It came as no surprise that four actors share a great bond with each other outside of the show. They did many shows together and they would gladly continue to do more shows in the future.

“It is so great that we have such a strong bond. Before the show, we were great friends, and when we are on the stage it’s just so much trust within the ensemble. We trust each other to be intimate. When we get off the stage, we are enjoying to be friends again.” Bakke said.

Kyle Mason is the UND theatre actor who played the role of Sam has been involved in the theatre life for about 10 years.

“I enjoyed getting to know all my peers off stage, learning from them and developing my acting skills and techniques which I can apply on stage,” Mason said. “You have to learn how to separate your life and your emotions from your character’s life and emotions.” “Having a good support system – your friends and peers,  is a key to make a good show,” Mason said.

Although the cast was small, they all are on the same page and share the same goals for the show.

“Our goal is to tell a good story, to put on a good show for our university, and make our faculty and our peers proud. We want everyone to have a good time,” all the actors of Grace said.

If you are interested to watch shows at Burtness theatre, you are welcome to come to the next production Sweeney Todd: The Demon Barber of Fleet Street by Stephen Sondheim. Performance Dates: November 14-16 and 21-23, 2019.

Burtness Theatre is located on Centennial Drive, in the central campus, just across the street from the campus quad.