Up for the Challenge

UND Football Gets a Taste of Missouri Valley 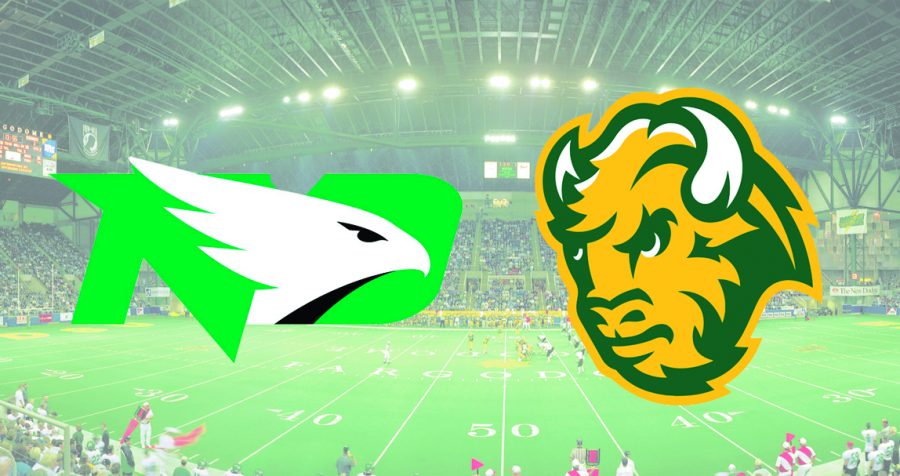 The University of North Dakota football team was taken down by in-state rival and No. 1 ranked
North Dakota State on Saturday afternoon. Although the first half showed promise for UND, the
second half crumbled and resulted in a 38-7 loss.
UND Head Coach Bubba Schweigert knew that the team had their hands full going into Saturday
but chose to look at the game as a chance to grow as a team and get better.
“The way I see it, this is a big opportunity for our team,” Schweigert said. “We have 11
opportunities to build our resume this season. There is going to be a lot of outside noise. We
just have to keep our guys focused on our preparation.
Schweigert could not have been more right about the outside noise. At the FargoDome on
Saturday there were 18, 923 fans in attendance; the crowd roaring with both NDSU and UND
fans alike.
This game was the last non-conference game this season. However, the matchup was able to
give UND a preview of next year as they join the Missouri Valley Football Conference.
The Missouri Valley Football conference has been dominated by NDSU followed by South
Dakota State University for the past three seasons. The start of this season shows no change to
that norm.
UND has not met up with SDSU since the 2013 Potato Bowl at the Alerus Center. That game
ended in a close fourth-quarter where UND came up just short. SDSU won 35-28.
Although the Missouri Valley Football Conference will present a challenge, the team has been
working on their own game and hopes to be competitive with these nationally-ranked teams in
the coming years.
“The best thing we can do is focus on us,” Schweigert said. “We will continue to go after the
best recruits we can get and find the best fits for our program. We’ve made progress. We keep
doing the things we do best and that’s why our program continues to get better and better.”

Following the game against Drake on Aug. 31 senior Noah Wanzek credited some of the
younger men on the team with showing some potential during a long offensive drive that
ended with a touchdown.
“A lot of those guys are the future of this program,” Wanzek said. “They just got out there and
started to get some of that confidence. It was good to see.”
NDSU will be a small blip in the road coming up on a promising season. UND is set to take on
Sam Houston State in the Potato Bowl Sept. 13. Sam Houston State currently boasts the same
record as UND coming in even at 1-1.
Last year UND took on Sam Houston State in Week 3 as well at Huntsville. The Fighting Hawks
were able to walk away with a 24-23 victory.
Stands should be packed for the Potato Bowl game on Saturday with the kickoff set for 4 p.m.
Bring your best spirit and get ready for a riveting match-up.