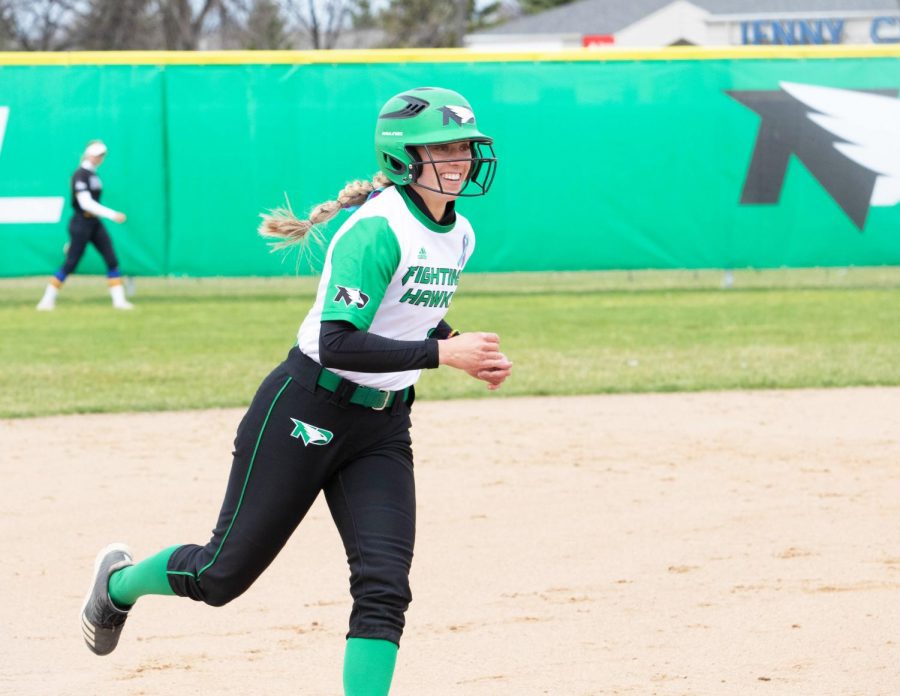 The University of North Dakota women’s softball team was back at home this past weekend for the first time since 2018. With the conditions in Grand Forks and flooding of the Apollo Sports Complex, the softball team was forced to move all home games to the Alerus Center. This marked the longest streak of away games in the NCAA, just ending on Saturday with 49 consecutive competitions.

The South Dakota State Jackrabbits came to town for a trio of games; two on Saturday and one on Sunday. The series started out with tension, as the Jackrabbits took down UND by just one run, finishing out 2-1. The doubleheader proved to be in the Fighting Hawk’s favor and UND came out with the win in game two, ending 3-1. UND was able to close with a bang as they defeated SDSU 7-1 on Sunday.

The wins came at just the right time, ending a seven-game losing streak. Western Illinois was in Grand Forks to take on the Fighting Hawks two weekends ago at the Alerus, which ended in a sweep. Following the weekend, head coach Jordan Stevens looked to improve upon little things that could lead to more wins in the Summit League.

“This clearly is not where we want to be,” Stevens said. “We played hard, that’s not the issue. We just have to figure out how to get wins.”

The Fighting Hawks used this to fuel the fire as they came out against the Jackrabbits hard and aggressive.

The win in game two on Saturday could be contributed in large part to junior pitcher, Nikki Pica. Pica had a near-season-high five strikeouts, just missing the six strikeouts she pitched earlier in the season against Michigan State. Pica allowed her first of four hits in the sixth inning.

Another key play in game two was a steal from first to second by Victoria Minor which led to a run-scoring double steal as Lexi Mayhood headed to home. It was this kind of heads-up baserunning and focus throughout the game that allowed the Hawks to come out on top.

The conclusion of the season will come with the Summit League Softball Championship in Fargo, N.D. from May 8 to May 11. The Hawks will have some familiarity with the Fargo field as the last series in the season is against the North Dakota State Bison at their home diamond. That series will take place next weekend, May 4-5.

The Fighting Hawks coming off a good weekend of softball against the third-ranked Jackrabbits will be up for the challenge. Over the weekend, the team managed their 20th win of the season, the third straight season that they have won at least 20 games.

Stevens consistently says that this Fighting Hawks team plays until the end and will not go down without a fight. UND looks to continue to play with fire going into the last games of the 2019 season.