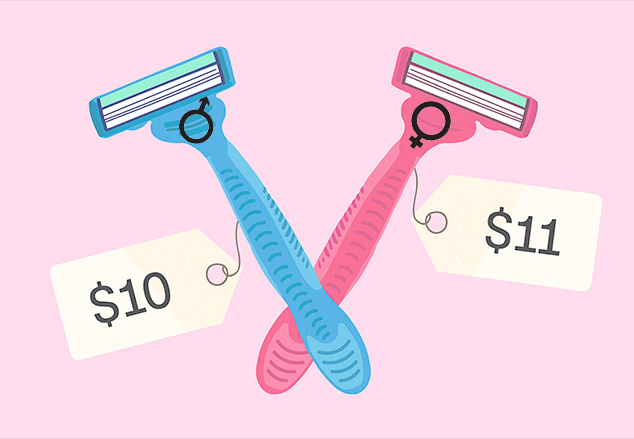 UPDATE: The story below previously read that  #AxThePinkTax was originally started by Billie, a subscription base retail website but has been corrected to the European Wax Center as the original company who kickstarted the campaign.

Imagine this: You walk into a store, see two seemingly identical objects with the exception that one is blue, and one is pink. You look further and discover that the pink one actually costs 7% more than the blue object. Welcome to Pink Tax.

Pink tax is an extra charge placed on products and services that are marketed towards females, this includes clothes, self-care products, dry cleaning, toys and even vehicle repair. This means that women pay nearly $1,400 more annually than men for the exact same product or service.

Looking at a woman only product, feminine care products such as tampons have sales tax, because they are seen as a luxury. If you walked up to a woman and asked her if she considered menstruation a luxury, you may need to run for cover because there is no woman alive who isn’t insulted by that idea.

There are petitions to get rid of pink tax, such as “Ax the Pink Tax”, a campaign started by European Wax Center, and even Billie, a subscription based retail site, has a website that provides you with information about how much money women have lost since birth if you input your birth date. If you were born in 1993, you would have paid just over $35,000 in Pink Tax costs alone. That’s college tuition for some UND students.

Just looking at big name stores you can see the Pink Tax inequalities, for example the name brand Schick Hydro, the men’s razor refills is $10.89 from Target, and the women’s equivalent at Target is $11.79. Nearly a dollar difference for a razor, that in all honesty doesn’t even work as well as a men’s razor, but that’s a whole different issue.

With the recent incline of subscription boxes, companies such as Dollar Shave Club has attempted to combat this issue by marketing their razors as unisex. Scrolling through the website, there is no specific sections designated for women to purchase a subscription of razors, but instead they’ve recently been applauded for promoting the use of their razors by “humans alike.”

The Pink Tax doesn’t just affect men and women, but boys and girls. Lego blocks for children ages 1-5 years in “boy colors” were $7 less than the “girl-colored” blocks. These are children, who don’t know the difference in color and parents who just want their child’s favorite colored blocks but will be sucked into paying more to make their kid happy.

When did it become punishable by additional cost to like the color pink? Thankfully in a generation of change, petitions like #AxthePinkTax have grabbed the attention of celebrities who use their platform to speak on the issue including Gina Rodriguez, Ashley Judd and Trevor Noah. Judd spoke at the Women’s March about many inequalities including Pink Tax.

“I know it is hard to look at your own entitlement and privilege. You may be afraid of the truth. I am unafraid to be honest,” Judd said at the march. “It may sound petty bringing up a few extra cents. It adds up to the pile of change I have yet to see in my country.”

While you sign a petition and wait for change, you can also opt out of buying Pink Tax products, purchase products targeted for men, buy gender neutral kids toys and above all never stop demanding change.