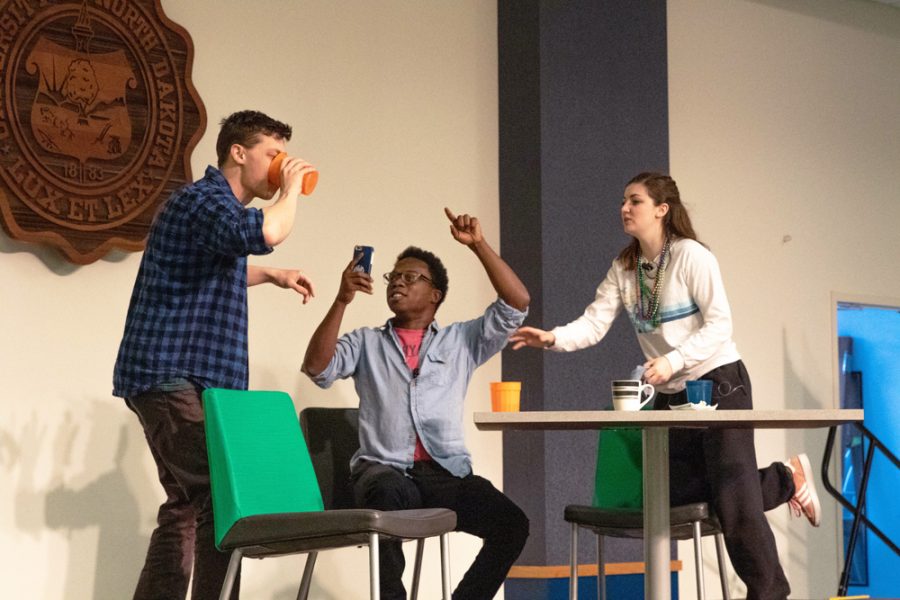 Last Tuesday night, the Sex and Drugs Show, otherwise known as Intervention Theater, gave the community a unique firsthand look into what it’s like to be a bystander in different harmful scenarios.

The It’s On Us student organization–along with the CVIC at UND prevention specialist Peggy Jo and substance abuse prevention coordinator Jodi Ramberg–hosted GTC Dramatic Dialogues in the Memorial Union Ballroom.

Each script differed and was able to show the audience how they can react as bystanders in dangerous situations whether it be with alcohol and/or sexual assault. Be showing different scenarios, the audience was able to take a second and think about how they could potentially react if they were in or witnessing a situation such as these.

“There’s ways where you can see that the bystander role can be taken and maybe people take it, maybe they don’t, it all depends on what their script is tonight, but it really shows all the components of being a bystander in any kind of situation with alcohol or sexual acts that can be harmful or healthy,” Peggy Jo said.

When the moderator “paused” the scenes, the actors would stay in character as members of the audience asked them questions about their behavior or questioned the choices they were making. This added to the immersion of each scene as it gave people a chance to experience how it would feel to be a bystander in each situation and think about how they would respond to it.

“These situations happen. The message is that they need to do something about it. They have a responsibility to stand up in front of their peers and say, ‘That shouldn’t happen,’ whether it’s an alcohol incident or a sexual violence incident,” Peggy Jo said. “Hopefully their getting some kind of tool or skill tonight that helps them make that choice of stepping in instead of walking away and wondering if that person is okay.”

The main message that people at UND, such as Peggy Jo and Ramberg, want to get across to students is to “see something, say something, do something,” and they hope that it is straightforward enough to remember in a situation where something needs to be done.

“A lot of times people freeze because they don’t know what to do, so we try to make the message as simple as possible, and these guys are going to reiterate it that it’s as simple as responding directly, distracting or delegating,” Ramberg said.

‘Directly’ is when a person actually does something about a situation. ‘Distraction’ is when a person gets the attention away from the problem that is arising. It can be as simple as spilling a drink or making a joke. Lastly, ‘delegating’ is just letting somebody else know whether it be a friend, RA, the police or anyone that can help.

Even if a student is not comfortable doing something directly to end a harmful situation, Ramberg wants them to know what their options are, and that they can still help by taking attention away from the situation or engaging help from someone else.

“It’s the same for a potential alcohol poisoning as it is for a potential sexual assault, do something,” Peggy Jo said. “You don’t want to just passively watch something happen that are dangerous for students, so we want people to either do something directly or cause a distraction or call 911 early, before the overdose happens or before the assault happens. We want people intervening in safe, early, effective and kind ways.”