Comes back to the UND Campus 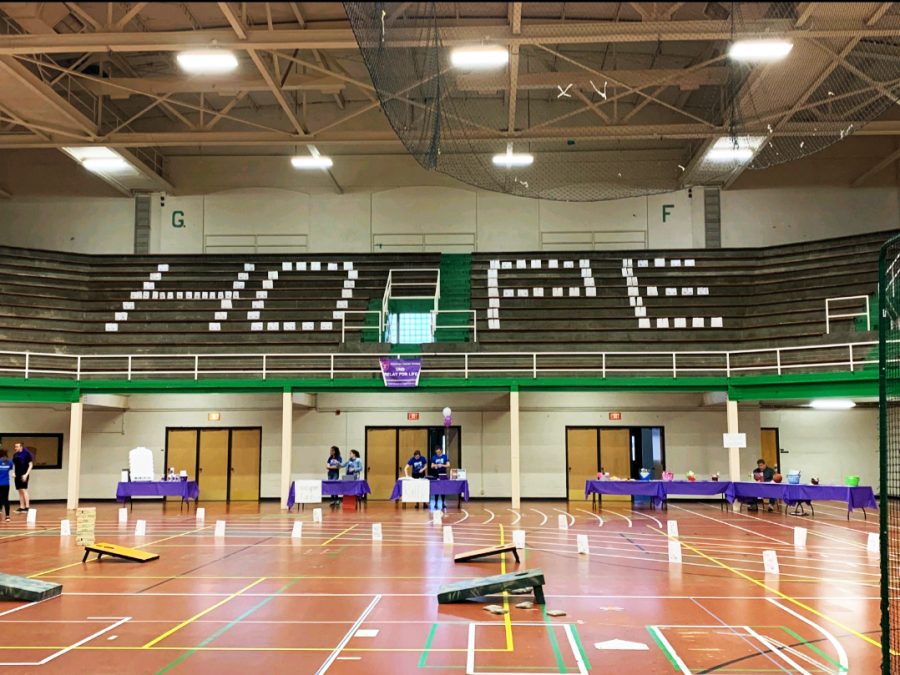 UND Relay for Life returned back to campus after a year hiatus bringing in more that $11,000.

Relay for Life is a fundraiser for The American Cancer Society. It is team cancer walk that is put on by volunteers all around the country.

19 teams signed up and participated in the UND Relay for Life. This event took place on Friday in the Hyslop Sports Center on campus. It lasted six hours and required at least one person from the team to remain moving the entire time. This person symbolizes that cancer never sleeps, and for a night neither do the teams.

The night consisted of games, a silent auction, food and more. There was something for everyone.

The University of North Dakota has its own relay committee. Karissa Crofoot, who is a junior here at the university studying Education, is the head of the UND Relay for Life committee. Alongside her were many other student volunteers including Grace DeVault, a senior studying Geology, who is the Team Development Chair.

DeVault spent countless hours recruiting teams and keeping them involved up until the event.

“There are a lot of us that have a lot of different jobs that we are doing and we are all just kinda running crazy right now but it all comes together,” DeVault said.

Crofoot is passionate about this event and has been involved with Relay for Life for the past seven years.

“I originally joined UND Relay for Life because I was involved in Relay for Life at my high school and so I had been doing it for four years,” Crofoot said. “I love the organization and what it stands for and how it helps individuals with cancer.”

To Crofoot’s knowledge, Relay for Life has previously taken place here at UND from 2013-2015. There was a break for a year or so and then it picked back up as a Mr. Relay pageant. Whatever the event may be, the overall goal has been the same.

“We celebrate those who have fought cancer, remember those who have lost their battles to cancer and we fight back against the disease,” Crofoot said, “We come together as a big group and fundraise for cancer research and cancer patients to help benefit them.”

DeVault holds this event close to her heart as she talked about how cancer has personally affected her, her family and her friends.

“Basically all of my grandparents have had cancer and friends of the family,” DeVault said, “It is important in a way because it is such a relevant cause to everybody basically that ya know, why not be involved?”

Relay for Life is an event that not only celebrates and remembers a community but also raises awareness about cancer.

“Everyone is affected by cancer in some way, shape and form and, so, if we can increase awareness and make our community more aware,” Crofoot said.

Because of this event, it helps a community bond together and share experiences and stories while working together to raise money for a cause that many people have been affected by.

“It makes your community closer because you know more about your neighbors, and your classmates and everything,” Crofoot said.

Not only does this event add to the Grand Forks community, but it also has outreach to the entire country.

“We are raising money for cancer research and cancer is one of the leading causes of death in the United States, so, it has a pretty relevant impact right there,” DeVault said, “It goes as far as giving back to the entire country.”