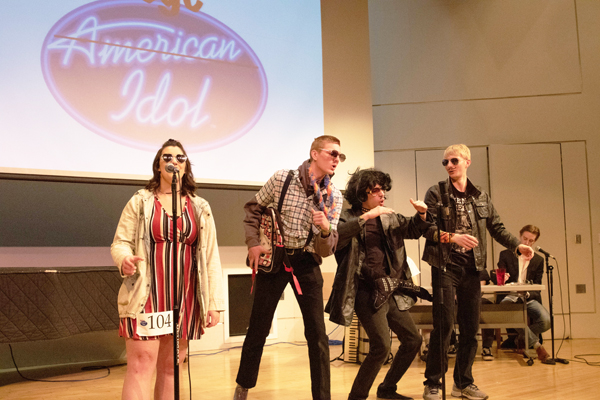 The battle for the golden microphone began again last Tuesday night at the Hughes Fine Arts Center during what might have been the tenth annual Solfege Idol.

“I want to say it’s been going for about ten years. It must’ve been 2009 when we started it, so this might be our tenth annual. Oh, I should’ve advertised that! But yeah, we’ve been doing it for about ten years,” the creator of Solfege Idol, Dr. Whitney Berry, said. “At the time, the American Idol franchise was just kind of starting and it was just a fun little reality show thing.”

Among other music courses, Dr. Berry teaches Aural Skills, a four semester long set of courses that is required for all music majors.

“It teaches students two things: one is how to look at a piece of music, and before they play it, know already what it sounds like, and then the other side of that is to be able to listen to music and notate it,” Dr. Berry said.

Solfege Idol is a project for the Aural Skills class that tasks students with taking a pop song of their choice and translate the words into the solfege syllables.

“If you’ve seen The Sound of Music, it’s the do-re-mi-fa-sol-la-ti-do. So we use those syllables to represent the different scale degrees in the melody. So in ‘Twinkle Twinkle Little Star,’ instead of singing ‘twinkle twinkle little star’ it’s ‘do do sol sol la la sol,’ so they substitute those syllables to indicate the scale degree,” Dr. Berry said.

Dr. Berry said that she could have just given her students an assignment to organize a song and perform it for the class, but the fake reality show concept is simply more fun.

“You’ll see the students really get into it, they’ll come in costumes. I get people who volunteer as judges, there’s one of the faculty members and a couple of former students who are on the judges panel tonight. It’s just like American Idol. The students will sing and then they’ll go to the judges and get their comments. It’s a fun night,” Dr.Barry said.

After all of the groups had performed, the judges, who were comprised of a German music enthusiast, a “bro” from southern California and a mock Simon Cowell, left to deliberate on who will win the golden microphone and all of the bragging rights that go with it. During this time, the audience is given the opportunity to vote for who they thought performed the best and those people will win an audience’s choice award.

The audience’s choice of winner was announced first: a moody duo clad in black leather who performed Owl City’s “Fireflies” with attitude. The judges announced their winner next: a group of four who sang Toto’s “Africa,” one of which played the tambourine with a unique sense of where the beat was.

Erika Pelach and Justice DeCoteau, both music education majors, were part of the group who took home the golden microphone.

“We didn’t have a very big stage presence, even at our sound check. I didn’t expect to win,” DeCoteau said. “But it was really fun. I’m glad Dr. Berry does a class like this, it definitely pushes us forward as musicians.”

“I think she teaches the class really well and she does make it really fun, like actually interesting to learn stuff instead of just singing scales every day. And as a vocal major, it genuinely did challenge me to do this type of experience,” Pelach said.