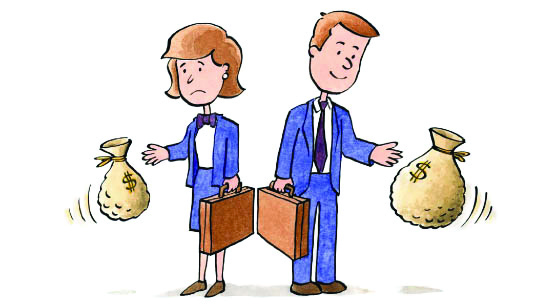 There is no gender pay gap, right? Is it still happening in our nation? How can it still be happening? These are the questions I’ve been asking myself since one of my professors brought up the gender pay gap in class.

After class, I went around campus and asked professors their opinions on the pay gap. None of them wanted to be quoted as this is a delicate topic. Either way, my purpose was to learn what they’ve experienced throughout their careers, as they’ve had more experience than me. From what I understand, some of this pay gap comes from misinformation. Some women simply aren’t informed about certain benefits that are offered to their male coworkers. Also, staying silent adds to the gap. How are others supposed to know when no one communicates it?

I got home and did some additional research. Instantly, I was flooded with the statistic, “women earn 80 cents to the men’s dollar.” This seems questionable. Why wouldn’t companies focus on only hiring women if they can be paid less? So, I looked where this information was coming from.

I stumbled on the Bureau of Labor Statistics website and read through their Highlights of women’s earnings in 2016 report. Right away it shows practically the same statistic I mentioned before. “In 2016, women who were full-time wage and salary workers had median usual weekly earnings that were 82 percent of those of male full-time wage and salary workers.”

Shortly after, there is this statement: “the earnings comparisons in this report are on a broad level and do not control for many factors that can be significant in explaining earnings differences, such as job skills and responsibilities, work experience, and specialization.”

Why is it focused on median pay? Why are people using this report as a basis for an argument? This report brought me more questions than answers.

After further research, I found some typical arguments that are meant to “explain” the pay gap. “Women have children and that affects their production, which affects their pay.” Alright, but what about after their child is taken care of? Are they supposed to play catch-up for the rest of their careers now? Using motherhood as an argument just doesn’t sit well with me. My mother has continued her job through seemingly endless struggles, as well as taking care of 5 kids and continues to push through it. I don’t find it fair to categorize all women into the “stay at home” lifestyle.

There is also the argument that women aren’t as educated as men and don’t work as long of hours. That doesn’t make sense either. Women have been continuously going to college at higher rates nearly every year so that argument is invalid. Also, there are plenty of women who work longer hours without compensation, just like some men experience. This unfairly categorizes women as lazy and uneducated.

If you are worried about gender pay discrimination, then you have two things that help you. The Equal Pay Act of 1963 should prevent any discrimination based on gender. EPA states, “all forms of compensation are covered, including salary, overtime pay, bonuses, stock options, profit sharing and bonus plans, life insurance, vacation and holiday pay, cleaning or gasoline allowances, hotel accommodations, reimbursement for travel expenses and benefits.”

The Equal Pay Act requires workers to be paid equal wages for equal work. It also requires employers to explain their pay differentials. EPA explains, “pay differentials are permitted when they are based on seniority, merit, quantity or quality of production, or a factor other than sex. These are known as “affirmative defenses” and it is the employer’s burden to prove that they apply.”

There’s also Title VII of the Civil Rights Act of 1964, which should prevent any discrimination in the workplace whether it be race, religion, sex or national origin. If you experience pay discrimination based on gender you can file a claim for both the EPA and Title VII, but there are time limits to each.

What can we do? Obviously, we’re still having this problem since it’s still a hot topic, but these statistics being put out are incredibly misleading. The only thing these reports are doing is adding fuel to the flame. The solution I see is to speak up. Not just the person experiencing the discrimination, but coworkers too. Nobody should be paid less just because of their gender and most people would agree, apart for those old school types. We already have two barriers that should prevent this problem. We should be asking more questions when negotiating without the fear of settling for less than our coworkers.