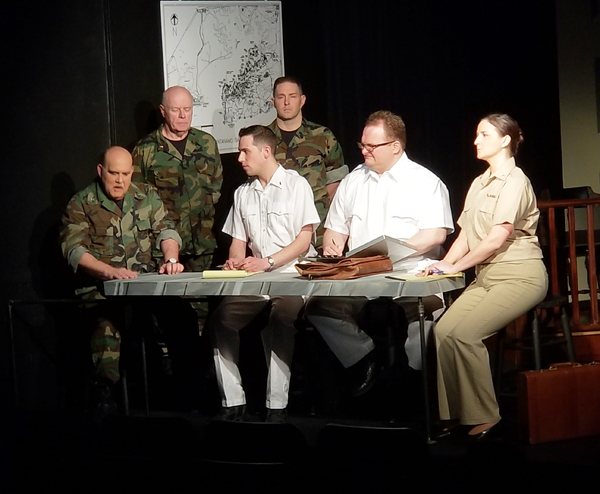 The Marines were in the spotlight during the performance of A Few Good Men which took place at the Fire Hall Theatre on Friday. It was presented by The Greater Grand Forks Community Theatre and Zimney Foster P.C Law Offices.

The Fire Hall Theatre was established in 1947 and is located in Downtown Grand Forks. The theatre has been running for 71 seasons so far and is still counting. Several different plays take place here over the course of the year and they even host a summer camp for kids.

A Few Good Men was written by Aaron Sorkin and first hit the stage in 1989. Since then, the play has continued to be performed on different stages in theaters across the country.

A Few Good Men takes the audience back to the summer of 1986. There are two different locations that this play takes place. One of those is in Washington D.C. and the other is on a United States Naval Base that is located in Guantanamo Bay, Cuba. Although both locations shared the same stage, the audience was able to tell the difference between them.

The lighting, staging and costuming brought the play to life in a way that was able to resonate with the audience members. The lighting helped split the stage into different locations and gave a dramatic effect when needed. A spotlight was used to portray flashbacks to give the audience more context. The costumes were realistic and added to the story.

The play A Few Good Men is about a conspiracy theory and the truth behind a dead Marine, PFC William Santiago. LTJG Daniel A. Kaffee is assigned to the case. Kaffee is a Harvard graduate that lives in the shadows of his once successful father, who was also a lawyer. Kaffee, LTRC Joanne Galloway and LTJG Sam Weinberg work together to solve the mysterious case and reveal the truth.

The Grand Forks community came out and filled the seats in the Fire Hall Theatre to support the community members that took part in the show. A Few Good Men was directed by Kristin Dauphinais and David Dauphinais. It starred 17 community members some of which were Isaac Engles, Leslie Lekatz and Rob Howard, just to name a few.

Although the play was portraying a more serious issue, there was some humor mixed in. The audience was able to get a few good laughs from the side comments of characters.

A Few Good Men was a play that was able to engage the audience during the unraveling story and raise questions about honor and integrity. The overall message that was given within the play is able to stick with the audience even after they exit the theatre.

If you weren’t able to make the performance on Friday, A Few Good Men will continue its performances through Apr. 6 at the Fire Hall Theatre. The show times are Thursday through Saturday at 7:30 pm and on Sunday at 2 pm. Student tickets are $13 and can be purchased at the Chester Fritz Auditorium.

If you’re interested in helping out the community theatre, they are also looking for volunteers. For more information visit http://www.ggfct.com/.