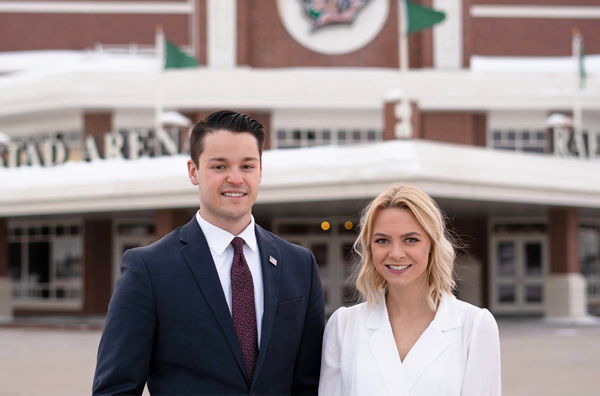 On March 4, another duo announced their intention to run for Student Body President and Vice President in this upcoming Student Government election. Taylor Schaubert and Torie Danielson have decided to put their name on the ballot.

Taylor Schaubert is from Bismarck North Dakota and is a junior at UND studying political science and economics. He is involved with Student Government, currently serving as chief of staff and is a member of Lambda Chi Alpha fraternity

Schaubert had the idea to run earlier this year. He saw the ways he was able to really place his passion towards this university on the senate executive team.

“Serving as Erik’s chief of staff was a great experience for me, I got to work hand-in-hand with a lot of the vice presidents on campus and build good relationships with the faculty,” Schaubert said. “I also got to work on the student involvement projects on a smaller level and really see what the organizations needed and wanted here on campus. This all is what drove me to want to pursue a larger goal and taking over Erik’s position as student body president.”

Torie Danielson is from Fargo, North Dakota, she is also a junior at UND, currently in the nursing program. She is involved with her sorority, Kappa Alpha Theta currently serving as president of her chapter. She has also been involved with UND’s Women’s Lacrosse team, peer tutor experiences and Panhellenic council’s judicial board. Danielson has no prior with student government experience.

“I haven’t ever been involved with student government, but I believe I bring a little bit of diversity with being involved with a lot of different parts of campus,” Danielson said.

When Schaubert and Danielson announced their intentions to run on their Facebook page, they stated that they believe in moving ‘#ForwardTogether’. They both envision this idea as students who are currently attending UND having a say in what the university looks like to come.

Schaubert made it very clear that he does not want the current students of the university being forgotten about. He believes that the potential students who will be here experiencing the new union, new library, and possibly a new business school are just as important as the students who are here during these changes.

“We don’t want to take a building such as the union, while it’s great for the university, I think it’s important for the students who are here now are represented as well,” Schaubert said. “I know this university is transitioning from the past to the future right now but my main focus for next year is that faculty, administration, donors, and everyone else who is involved, doesn’t forget about the present students who are here right now at UND.”

Schaubert and Danielson see communication across campus as one of the biggest things lacking right now. Schaubert sees that students become angry, frustrated, and disappointed in their university when they are not aware of where their money is being spent.

“The biggest problem that happens with student fees and student charges is the lack of transparency, student’s don’t know where their money is going and that always breeds more anger, and so I’m really pushing for more transparency,” Schaubert said. “So if the parking changes, and more money is going back to UND, where is that money going, how is that money going back into the university to help students and I think that will help solve a lot of those problems.”

He sees his role and Danielson’s role as the key communicator between the university and the student body, especially in a time of change.

“Communication is really key, that is something I have really learned in my leadership experiences. I see us communicating through multiple forms, social media, emails, things like that, just really keeping everyone updated,” Danielson said.

With campus missing vital buildings this upcoming year, they would like to increase student involvement in clubs on campus, and also within the community, both focused on increasing partnership with the Greater Grand Forks community.

Danielson sees involvement in the university life vital. She believes that her involvement at UND and different opportunities to get involved is the reason why she picked UND and stayed. She wants clubs on campus to feel valued and supported.

“On our campus, we are lucky to have houses for our Greek life, whereas other campuses I have learned don’t have that, so just taking some of the stuff that I have learned from those experiences I have had across the country and how they deal with that, and bringing that to our campus”

Currently, Schaubert is working on an event called “Spring Fever” with the current Student Government executive team. He hopes that events like this continue throughout the years to come, possibly even more than just once a year. Spring Fever is an event being planned to take place near the week of finals. On Wednesday March 20, Student Government voted on SB 1819-16. This bill allocates a total of $35,000 to support a musical talent for this event, reduced ticket prices for students, and transportation.

Schaubert hopes that events like this can continue and the partnership between UND Student government and venues like the Ralph Engelstad Arena and the Alerus Center can continue to strengthen.

For updates on Schaubert and Danielson’s ticket specifically, you can look at their Facebook and Instagram page.