A season of learning 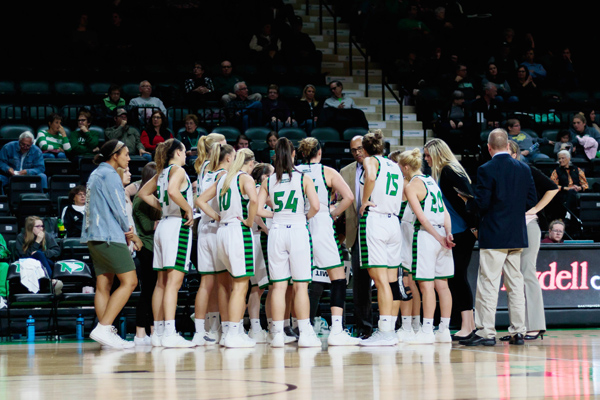 The 2018-19 season didn’t go the way the University of North Dakota Women’s basketball team had hoped for.

The team started off the season on the wrong foot, losing their first game to No. 18 Syracuse on the road. The women won their next game against Valparaiso only to lose the next three in a row.

One of the reasons why the basketball team wasn’t as successful as they wanted to be this past season was because they lacked consistency. The trend of winning one and losing multiple games in a row continued throughout the season.

A factor that the Fighting Hawks lost control of was turnovers. This number was especially large in some of the losses this season. During a loss against South Dakota the team racked up 27 turnovers.

Despite the season ending negatively, the women’s basketball team did remarkable things on the court. Against San Francisco, the team scored 100 points, a new point high for UND. They had 33 field goals at Mayville State and Western Illinois. They earned a total of 58 rebounds against Denver, as well as a whopping 10 blocked shots in the same game.

The Fighting Hawks have a lot to look forward to in the coming seasons. They have a group of talented freshman and sophomore players that were breakout stars this past season, and with time to develop in their skill they will continue to excel in the sport and help the team in future.

One of the young players on the team that will be a key component in future success is Julia Fleecs, a current sophomore forward who broke her UND career record during this past season. Fleecs reached this record against Western Illinois on February 1 with 33 points. She had a total of 275 points this season, contributing about nine points per game

The University of North Dakota had many players who excelled on the court every game. A couple of those players were senior forward Lexi Klabo and senior guard Jill Morton. Klabo led the team in a multitude of categories. She had the highest amount of minutes played, free throws made, field goals and scoring in general. Klabo scored almost double the next person on the team with 544 points, averaging 18.1 points per game. Morton had a total of 295 points and averaged 9.5 points per game.

As the season came to a close, UND has to say goodbye to two of those top players this year. Both Morton and Klabo will be graduating in the spring.

The only thing to do after a bumpy season is look to the future, which is what the Fighting Hawks will be doing as they take some time off before starting up weights and practices again. The team will work on consistency and staying in touch with each other as players and teammates in order to ensure success in the coming seasons. Throughout the rockiness this season, the Hawks stayed true to their team. They never gave up and every player showed up to give 100 percent every time they were on the court.