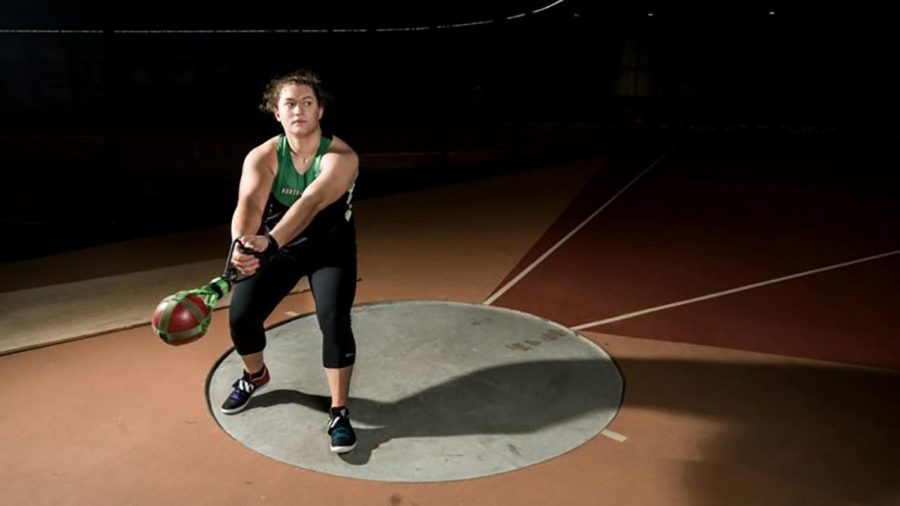 Two individuals on the University of North Dakota Women’s indoor track team have just qualified for nationals. This is the first time in North Dakota Division I history that this has happened.

The top 16 individuals from across the nation earn bids to the DI Indoor National Championships. Senior Kyley Foster and redshirt senior Molli Detloff secured their spots within that elite group after the Summit League Conference Championships.

Pole vaulter Kyley Foster was born and raised in Detroit Lakes, Minn. and is currently studying commercial aviation. Foster’s goal from the beginning of the season has been to make it into that coveted top 16.

“I’ve been working a lot harder in the past few months,” Foster said.

Foster was able to break her own school record with a vault of 14 feet 2.75 inches. She became the first UND women’s pole vaulter to vault over 14 feet and the vault simultaneously bumped her up to 12th in the nation.

“The conference meet felt good. I was excited to be there, excited for the competition and I was making the heights,” Foster said. “I made 14-2 and three-quarters and was top two and I made it on my third attempt. It was a really crazy experience, a peak.”

Redshirt senior, Molli Detloff, was born and raised in Elk River, Minn. She is a rehabilitation and human services major.

“My goals from preseason were to make the championship,” Detloff said.

Detloff is a thrower who is consistently rewriting the history books for the Fighting Hawks. During just her freshman year here at UND she broke the weight throw record three different times.

Detloff was not expecting to come this far in the season. She was ranked 13th going into conference weekend and was able to improve that ranking to 11th with a new personal-best and school record of 72 feet 1.75 inches. She is the first UND thrower, woman or man, to throw farther than 70 feet.

Although the two athletes bring their best to every meet during the season, preparing for the championship is a little bit different. All of the work has been done at this point in the season.

“Training is going down at this point, we aren’t conditioning as hard,” Detloff said.

Both Detloff and Foster were excited to have gotten national championship bids. Although it was a goal from early on, the success still came as a surprise to them.

The Division I NCAA Indoor Championships will take place March 8 and 9 in Birmingham, Ala.

“I’m not going to change anything now,” Foster said. “I just do the same thing every day.”

Following the Indoor Championships, the track team will travel to San Antonio, Texas for some training during spring break and the first outdoor meet of the season.