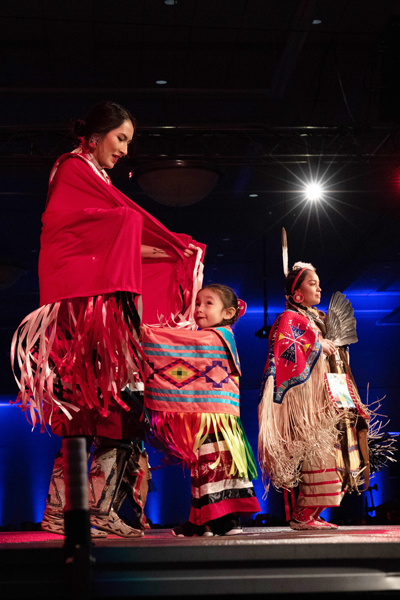 On Saturday night the Alerus Center took a trip around the world for the 57th Annual Feast of Nations.

Over 95 countries are represented at the University of North Dakota. The Feast of Nations is an event that allows different cultures from across the globe to be showcased through different forms of art. Some of these included song, dance martial arts and musical instruments.

One of the newest additions to the 2019 program was the UND Kendo Club that just started its presence on campus this year. Kendo is a form of a Japanese martial art. The UND jazz band and the Korean Exchange Club also performed on stage. There were many other performances ranging from Hyland dancing to traditional Japanese drumming.

Each act was entertaining in their own way and with great entertainment also came delicious food. There was a four course meal served throughout the three hour event. Each dish had a unique flavor and showcased different dishes from around the world.

Tea stations were also set up in the ballroom so people could choose their choice of tea at the end of their meals.

This event was put on by the UND International Organization (IO). IO is an on campus organization that serves the purpose of promoting diversity and the understanding of different cultures on campus. Their main goal is to foster connections between international students as well as local students. This group encourages all students to join, even if you aren’t international.

Christina Walker is the President of the UND International Organization. She is from Canada and has dual citizenship in the United States. She was secretary for two years before becoming President.

Walker was introduced to the organization during the student involvement fair when she was a freshman and has been involved ever since.

The Feast of Nations is a large event that takes some time to plan. The organization starts talking about the event in September and usually has a theme picked out by October. Once the theme is picked, the planning begins.

This event brings the Grand Forks community together by showcasing different cultures from around the world in different ways.

“It promotes a lot about thinking about a diverse world and bringing cultures so people can see them. You get a good taste of a lot of things and you can decide what is interesting to you,” Walker said.

Walker stressed that it is not just about international students and cultures. She encourages any and all students that are interested in IO to go to a meeting and participate in the Feast of Nations.

“We want people from the community, from the US, to understand that they are also part of that diversity,” Walker said.

Overall the event was a great success and was sold out. The Alerus ballroom was filled with a diverse crowd of people that were all their to share and learn about different cultures.

The Feast of Nations is a great way to meet new people and explore other cultures within the Grand Forks community. If you are interested in taking part or helping with Feast of Nations in the future, you can reach out to the UND International Organization on campus.