How Successful Will Your Match be This Valentine’s Day? 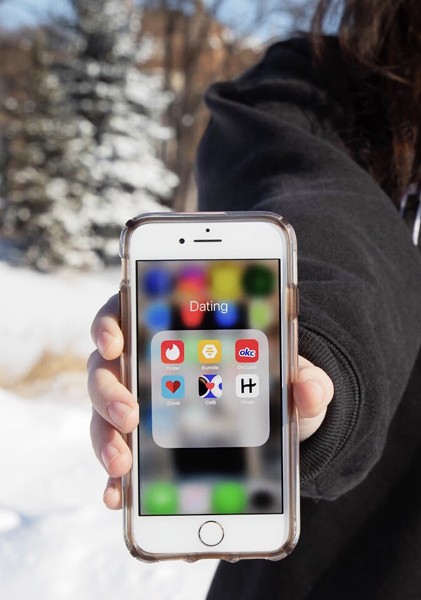 In a recent study completed by WalletHub, North Dakota is one of the worst states to be single in, placed 48 out of 50, 50 being the worst. The only states worse to be single in are Arkansas and West Virginia, respectively. The study had three different areas of focus that led to their findings; dating economics, dating opportunities and romance/fun.

As Valentine’s Day draws near and the idea of having another, or a first Valentine’s Day alone creeps into peoples minds. The number of downloads for dating apps like Tinder and Bumble have skyrocketed. We have all heard the typical Tinder and Bumble stories. But how bad or good are these stories really? UND students share their experiences using dating apps and didn’t hold back any details

“I met a guy on Tinder, met him at a party was very uninterested so he introduced me to his friend and we are a VERY happy couple” – Emily

“Both of my cousins married their tinder dates” – Lauren

“One time I went on a Tinder date and this dude was not only shorter than me, he called me the wrong name the whole night” – Jenna

“I took a tinder date to formal, she threw up in the bathroom and I had to pay a clean up fee and her cab home, we did end up hooking up a while after so I guess it’s a success” – Noah

“I met my last boyfriend on Tinder and was with him for a year, after not being able to take the relationship seriously, I only used Tinder to pump my tires and then I met my current boyfriend” – Anna

“I went on a three-hour Tinder date with a guy that I just met and who told me that I remind him of his younger sister. He still tries to contact me.” – Audrey

“I accidentally matched with my cousin on Tinder, I did not even realize who she was until we both showed up to the same family reunion the next day” – Kyle

“I went on a Tinder date with a guy to Olive Garden and not only did he take the last breadstick, he was super rude to the server and mentioned he was actually a college dropout. The date was so bad I went to the bathroom and called my friend, she came to Olive Garden and lied, saying her and her boyfriend broke up, and I made him drive us back home” – Mia

“I thought that I met my future husband on Tinder and then he ended up getting his ear pierced and then shortly later got his nose pierced and then I ghosted him, it was easily the most cringe thing I have ever had to lay eyes on.” – Sydney

“One time, I was seeing this guy that I matched with on Tinder, and his ex-girlfriend called me at 3 a.m., on his phone, calling me profound names” – Morgan

“I met my current (now ex) boyfriend on tinder and fell in love and this week I walked in on him and his ex-girlfriend getting back together. I found her bra hanging in my room” – Kayla

“I was blacked out drunk at a social event, came home, and woke up next to someone laying next to me who I didn’t know, but we matched on Tinder prior, and I don’t recall what happened with them that night.” – Logan

So is it all worth it? The good, the bad or the ugly. Most people who had a bad story with online dating, usually had a couple good ones too. But in a state like North Dakota, where it is hard to be single, it may be worth the risk to take.

**In order to protect the privacy of students at UND all names used in this article were changed.

The study is available here: https://wallethub.com/edu/best-states-for-singles/31667/

Author’s Note: During the research I conducted for this article, a lot of students have opened up about their experiences with sexual harassment, sexual assault and rape. If you have ever been or are in an uncomfortable and unconsented situation, please reach out to resources on campus like CVIC at UND, the counseling center, the office of student rights and responsibilities and UPD.