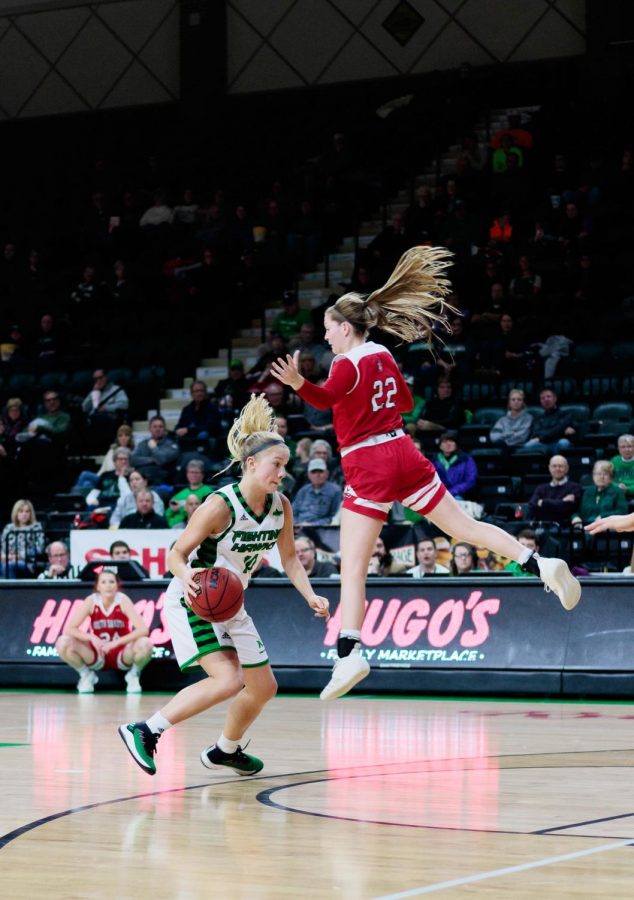 The University of North Dakota Fighting Hawks started the second half of the Summit League slate this weekend, beginning with a game on the road versus Western Illinois University.

The Fighting Hawks started out strong Friday night against Western Illinois. Sophomore forward Julia Fleecs dominated the court by scoring the first 14 points for UND and the Fighting Hawks finished the first quarter with the score of 16-14.

By halftime the Fighting Hawks fell behind Western Illinois University 34-44.

As the third quarter came around Fleecs reached her career high with 21 points. This wasn’t the end for Fleecs, adding 12 points to that by the end of the game.

The intense back-and-forth game ended in a disappointing fashion for North Dakota. Even Fleecs’ career-high was not able to set the Hawks ahead as they fell to Western Illinois 90-111.

Klabo and Dailey also had big nights. The duo delivered 11 points each for the Fighting Hawks in Friday’s game.

Despite the hard loss against Western Illinois, there is something to be said about the sophomore forward. Fleecs made history for herself by raising her career high to 33 points. She brought a dominating presence to the game, clocking 29 minutes on the court and shooting 13-18 from the field.

Overall, the Fighting Hawks are off to a rough start in the 2018-2019 season, as they are currently on a five-game losing streak. The season started in late October, and they won both of the exhibition games which seemed to bring excitement for a promising season.

If the Fighting Hawks wish to make it to the playoffs and advance throughout, they simply need to be consistent with their wins, rather than winning one game and losing five in a row. They also need to be quick on their feet and keep the ball out of their zone.

“We’ve got to put the ball in the hole a little bit better, we’ve got to get tougher with the rock in attacking the rim and we’ve got to knock down some outside shots,” Head Coach Travis Brewster said. “We need to find a way to regenerate ourselves at this part of the season.”

The Fighting Hawks are set to play North Dakota State at home on Thursday, Feb. 7 at 7 p.m. UND lost to NDSU in a close game, 57-69, just two weeks ago so this game is sure to bring some fire to the Betty Engelstad Sioux Center.

The basketball game is free for students and sponsored by Buffalo Wild Wings, so stop by on Thursday for some prizes, live action and to support the Fighting Hawks women’s basketball team.