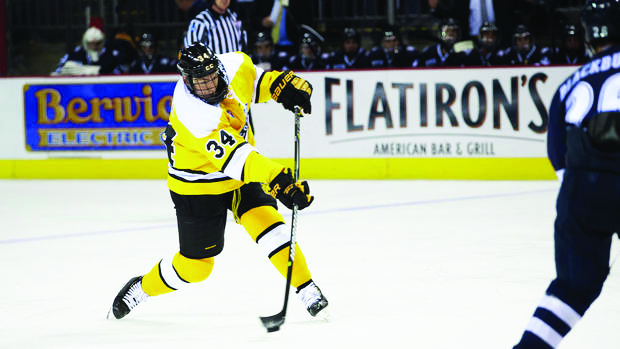 Photo by Casey B. Gibson

The decision to transfer colleges is a difficult task for many, but for athletes it can make or break their careers. Both Fallyn Freije and Chris Wilkie transferred from North Dakota, but like many, it was for different reasons.

Fallyn Freije played three years at UND for the women’s basketball team. Freije was a centerpiece for UND during her career. In Freije’s 90 games played at UND, she averaged 24.3 minutes, 9.3 points and 5.6 rebounds per game. While the numbers were there, the passion was not for her. This led to her decision to transfer late in here career.

“A big part was my relationship with the coach,” Freije said. “ I feel like he did not have my best interest in mind, especially over the second half of the season. I had a few injuries and talking with him about that, and the future, was kind of tough. He had acted similar to me in my previous years, but I felt he would have changed in time. But, I did not want to go through my last year like that. I wanted to enjoy basketball and use my abilities to their full potential.”

Transferring at any point in a college athletes career is difficult, especially when it is in the later stages of their career. For Freije it was well worth it.

“Yes it was hard, especially because you grow so close to those teammates that are with you, and those underclassmen that are like your little sisters at that point. I think it would have been easier if it would have been earlier in my career,” Freije said. “But, I did not feel as moved to transfer earlier in my career because I loved playing for my home state, being in my home state and all of the friendships. Plus I think the school is phenomenal, and the athletic department. It was super tough because I would have to leave all that my final year. But, when it came down to it, I needed to enjoy basketball again.”

Freije had reached her breaking point and did not see a future here anymore.

“It was all with the coach,” Freije said. “I talked to him a lot about things I was not receiving as a player for him and things that were just tough on me. It was a lot of mind games and manipulation. It got to the point where I was not enjoying basketball, and I knew it would not change my senior year if it had not changed in the three years prior. I did not want to end my career regretting staying there.”

While Freije had her reasons to transfer from UND she loved all other aspects during her time here.

“Everything else at UND was 10/10,” Freije said. “The athletic department is fantastic, the town, the community that supports the athletes and the professors. They work well with us athletes with traveling and our busy schedules.”

As for possible solutions, Freije believes listening is key.

“It is tough seeing articles supporting him. Seeing what we think is a fake positive side,” Freije said. “It is really tough because I had a lot of friends either quit or transfer to small schools. I just had to be bold and know it would work out transferring to a Division I school only with one year left and being fortunate enough to receive a scholarship.”

There are many different reasons why athletes seek to transfer schools during their career. In the case of Freije, it was more of a last resort decision. Chris Wilkie, who spent two seasons at UND with the hockey team, just wasn’t having the success he wanted.

In his 62 games at UND, Wilkie boasted six goals and 13 assists for 19 points. Wilkie was drafted by the Florida Panthers in the 2015 NHL Entry Draft in the sixth round, pick number 162 overall.

Wilkie showed promise coming into UND, but things just did not mesh or click here. A fresh start was needed.

“It was a mutual agreement to move on. It was not this one event that happened, I just needed a fresh start,” Wilkie said. “I think my two years there did not go as well as I hoped. I think at the end of the day I was needing a fresh start. Sometimes I think that can benefit someone, and at the end of the day it worked out for me. I have no regrets about transferring to Colorado College.”

Wilkie had a different path than Freije. Wilkie had to redshirt this past season, just being able to watch from the press box each game. This can be hard on a player, but Wilkie put his head down and saw the silver lining.

“Things are going really well at Colorado College. I’ve enjoyed it a lot since I’ve transferred,” Wilkie said. “Obviously, nice to get through the redshirt year and get to be playing again. I’m happy with hockey here and everything, so no complaints.”

Wilkie had the opportunity to play his former team at the Ralph Engelstad Arena just a few weekends ago. Wilkie scored a couple points in the series and got to go against some of his best friends.

“It was fun. A little different being on the other side of it, but it was nice to be back at the Ralph again. It was something I had circled on my calendar for a while,” Wilkie said.

Wilkie, just like Freije, loved all other aspects of his time at UND. He developed relationships that will be with him for years to come.

“I made a lot of friends there that I stay in touch with all the time. Not only teammates, but other students as well. The guys that came in with me in my class are some of my closest friends. Away from the rink, and everything like that, I loved my two years at North Dakota,” Wilkie said.

Both Wilkie and Freije have no regrets about transferring colleges and love their new schools. Both have had great success already since transferring. Although transferring can be one of the toughest decisions a collegiate athlete can make, sometimes it really is for the best.