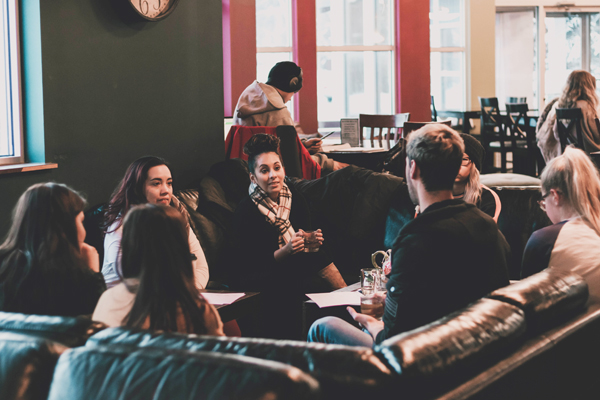 PeggyJo, the Prevention Education Specialist for CVIC at UND, helped host the “Spilling the Tea” talks that take place each month on campus at Archives Coffee House.

“If you go to an event that happens one time a year, and never talk about it again, then you forget,” PeggyJo said. “Part of my job is to help people recognize that there’s an issue, but also to recognize to respond.”

This month’s discussion was on the topic of stalking, a fitting problem to bring to people’s attention and talk about as January is Stalking Awareness Month. The discussion also touched a lot on the new Netflix show “You,” as it accurately depicts many of the signs and dangers of stalking.

“Every month we highlight something new. As January is Stalking Awareness Month, it was only fitting to talk about stalking this month,” PeggyJo said. “Then in October we talked about domestic violence, in April we talk about sexual assault, so certain months have designated things. Other months are Spilling the Tea on Consent; there’s a tea video out there about consent so that’s kind of where we got the theme from.”

The idea was born last summer after PeggyJo started to work with the It’s On Us student organization.

They wanted to find a way to put together events that weren’t too “over the top” where people would be able to discuss ongoing issues, and landed on the idea of Spilling the Tea.

The venue also works in the favor of the idea, as it houses a cozy space where about a dozen people can comfortably sit and get input from one another about the month’s topic, all while enjoying complimentary tea. It’s not always the same people that go to host it either, as they sometimes invite different partnerships throughout the community and campus.

“We’ve had UPD come and talk about ‘what is UPD’s role in these situations? They’re not just there to arrest, so what is their big role in ending violence in our community?’” PeggyJo said.

The group also makes it very easy to keep informed on when another of these events is going to take place if anyone is interested in attending.

“The UND website calendar is kind of where I just put all of my events,” PeggyJo said. “Word of mouth, being involved with the It’s On Us group and attending their meetings, there’s a variety of different ways. It just depends on what’s your way of communicating, but I would say the biggest way is just the UND calendar.”

If you’re looking to meet with someone to discuss something that is troubling you in a more private setting, Erica, the Campus Confidential Advisor for CVIC at UND, is more than willing to meet with you whenever you need.

“I have campus hours where I’m on campus 20 hours a week, but outside of those hours I’m always willing to meet with a student,” Erica said. “My belief is meeting students where they’re at, so if that means that we meet for thirty minutes before your class just to get the rundown, then we meet for an hour the next day, sure. If that means we meet for thirty minutes and you get what you need, and maybe not have to dive into everything, that’s just fine. I’m here for whatever a student wants and needs.”

She explains that she can even help you if you are looking to talk to someone about an issue where you may be concerned about something that you think is going on with someone else.

“It also doesn’t have to be you yourself as a victim, it can be for that friend or that family member or your neighbor across the street, I’ve had many of those conversations too,” Erica said. “Because this is everywhere.”